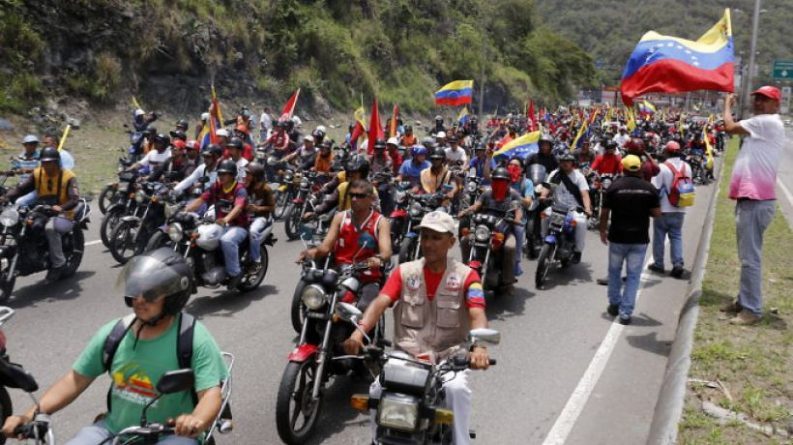 The first time I saw a “Colectivo” in action and what it is capable of, I was very young. I would be like nine, maybe ten years old. That takes us to 1969, in the hills of Los Frailes de Catia, upper part of the Macayapa barrio, at the foot of the Waraira Repano.

The place where a collective activity was developed was the El Encanto stream, which when grown by the rains, left us some hundred and fifty families isolated due to the flow that came down from the mountain of San Chorquis, from where they call the Camino de los Españoles. There were almost a hundred men and women around me, there in that part of the hill, activated, in motion, who did not stop carrying, loading things, passing tools, emptying concrete and stone containers, while others firmly fixed beams from one side to the other. An immense pot of sancocho (soup) steamed nearby.

This memory came to mind when I read recently that high spokespersons of the government of the United States have requested that the organized popular movements of Venezuela under the figure or voice of “colectivos” be added to their long list of “terrorist organizations that are a danger to the world. ” The campaign of demonization via social networks and media is triggered immediately. They are added to the tasks of fabricating false positives, fake images to badly feed “circumstances” that involve the “colectivos” and encourage the North, which has a reckless desire to invade us, to further harden the blockade and siege against the Venezuelan people.

Those people, of that ‘colectivo” of my childhood, brought to my memory, built nothing more and nothing less than a bridge over the El Encanto ravine for the neighborhood. It still exists, lost in those mountains. Neither time, landslides or use have played against the infrastructure. My old man, Augusto, led the Colectivo de Macayapa. Light, pipes, shelter and maintenance of the springs, main sources of water for the community, put out forest fires, sports, construction of stairs, the annual parties of the barrio and, of course, the safety of the sector were in the charge of these men and women of this group for those times in the hill of Macayapa. Today they would be included along with hundreds of “colectivos” in the list of terrorists in Washington, along with my old man, because his actions have not changed.

I have lost count of how many “colectivos” I know throughout the length and breadth of my country. From an Urban Land Committee (CTU), on top of the Magallanes de Catia, where the asphalt ends; the brave Communal Council of Caruto, deep in the plains of Barinas, made up only of women; or the La Piedrita Labor Collective, with its almost thirty-five years of community organization in “23 de Enero”.  Impossible to stop appointing the Tupamaro Revolutionary Movement, historical colectivo of the parish, of the barrio.

Alexis Vive Foundation
And from them we turn to the most recent ones: the urban and rural cells of great resistance in their popular zones: the Local Committees of Supply and Production, better known as CLAP. They are everywhere. It is incredible. Their level of organization with those below has turned this structure into a “colectivo” that is becoming stronger and stronger. To manage to divert the chain of capitalist distribution so that the food arrives directly at the homes is not an easy task. And that is just one of their significant achievements in the communities.

In my work as barrio communicator I have had the privilege of sharing with those organized men and women of the popular communities, but not only that, but I have also gone to their spaces with hundreds of visitors from other countries who have shared with them and who can, on reading this, attest that these movements are couldn’t be further away from being “terrorist cells under the orders of a regime”. But they can also tell you about the great power of defense and mobilization that these groups have accumulated through years of community work.

There are two sectors or collectives widely demonized from the social networks and these falsehoods are repeated by the media: they are the motorized collectives and the collectives of the 23 de Enero neighborhood. Some, the first, are part of a gigantic labor union in the country, mostly openly chavistas and working class sectors; they are from the “barrio”. They are famous for their motorized raids that manage to summon hundreds and hundreds of them when there are marches and rallies in support of the Bolivarian process.

The others, in “23 de enero”, as the Resistance Front of the Community Work Group Ernesto Che Guevara or Simón Bolívar Coordinator or the Commune El Panal de Alexis Vive, had a marked and recognized revolutionary and community trajectory even before the arrival of commander Hugo Chávez.

The list that Marco Rubio and the Departments of State and of the Treasury of that country will have to elaborate is long, since it includes Chavismo in the calls for those “terrorist organizations”, because here all of us are a “Colectivo”.