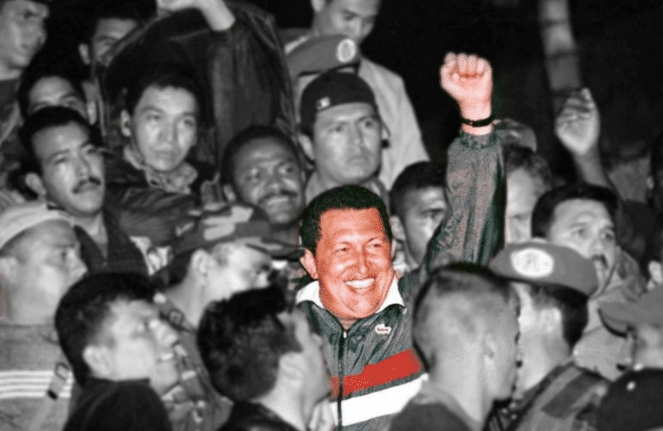 In April of 19 years ago the Venezuelan right-wing oligarchy that had been defeated in democratic elections barely three years before attempted a coup against president Hugo Chávez. The coup only lasted about 48 hours before Hugo Chávez was restored back in power. There was nothing spontaneous about that coup. It was premeditated with tactical preparation and undeniable support from Washington that quickly recognised the coup government. What was spontaneous was the massive response from the people of Venezuela who demanded the return of Chávez. And so it happened.

The short remembrance of those events that follows is no match for the outstanding video documentary titled “This Revolution Will  Not Be Transmitted”, that records the situation in Venezuela preceding the coup and the events during and after the failed coup.

On April 11, 2002 a march organised by right-wing opposition groups to protest policies that the Chávez government had taken to reform Venezuela’s oil industry decided to change its direction towards the presidential palace, Miraflores, where a crowd of government supporters had gathered. That decision was not only in contravention of the authorisation for the march, but it also was intentional in order to provoke a crisis since they had snipers set up to shoot and create chaos in the crowd. To that effect several people were killed while many dispersed. Soon after the government TV station was taken over and shut down, and private media outlets started accusing Chavismo of causing a “massacre” in the face of a “peaceful demonstration”.

In what seemed a repeat of the coup against Salvador Allende in Chile in 1973, there were threats of air raids against the Miraflores building. The situation was so serious that Fidel Castro in Cuba saw it necessary to call Chávez to urge him to avoid a confrontation that would lead to his death. Between the evening of the 11th and the early morning of April 12, Chávez surrendered himself in order to prevent any bloodshed and all ministers were forced to abandon the Government Palace that was immediately occupied by the opposition leaders and supporters. But Chávez never resigned as the coup plotters announced.

On April 12 a series of events took place in a quick succession rushing a forced takeover. Pedro Carmona, a business leader, was “sworn in” as “president”. He did not do it on the Venezuelan constitution but pathetically reciting a pre-written statement from a single sheet of paper. Some foreign governments – not surprisingly, the United States, Canada, Israel, Chile – gave recognition to the new de facto government. That was followed by another recitation to repeal 49 important laws issued by the Chávez government.

Perhaps, the most shocking action was the rescinding of the official name of the country from “Bolivarian Republic of Venezuela”, as established by the 1999 constitution, back to “Republic of Venezuela”, as it was before Chávez was elected president. The significance of the rejection of the term “Bolivarian” must be noted. It reflected a rejection of one of the most important values of Chavismo: the symbolic continuity of the struggle for independence of Latin America by the Liberator Simón Bolívar in the 19th century. The Venezuelan historic figure revered in the region, whose statue stands in all small and large plazas in Venezuela, and who gives his name to the country of Bolivia was reneged that day by a small group of individuals whose values betrayed their lack of patriotism. Their real intention was the dismantling of the Bolivarian Revolution all together.

RELATED CONTENT: Socialism and Counter-Revolution in Venezuela: An Interview with George Ciccariello-Maher

While this was happening inside Miraflores, outside those walls the news of the coup spread quickly by word of mouth and galvanised the popular sectors that had supported Chávez in the elections of 1998. They literally descended from their poor dwellings that surround the hills of Caracas to reclaim their leader.

By morning of April 13 large crowds of people gathered in mass at the gates of Miraflores demanding the return of their president Hugo Chávez. They were not pushed back by the guards. In the meantime, the military regained control of the situation and initiated the rescue and return of Chávez, who had been sent to the Turiamo naval base on La Orchila Island, off the coast of Venezuela. By late evening and early morning of April 14 a commando group rescued Chávez who was transferred to the Miraflores Palace where a large concentration awaited him and surrounded him in celebration. Cabinet ministers also begin to return to their positions. The coup plotters vanished to be later pardoned by Chávez. The coup was defeated in 48 hours.

In his speech, president Chávez emphasised the short-lived coup by referring to the critical dates of April 11 and April 13 saying “Todo 11 tiene su 13” (Every 11 has its 13). A brief expression that popularised the notion that there will always be a final victory following an initial reversal.

Politically, this was clearly a victory signalling that Chávez’s vision of a civic-military union had taken roots among Venezuelans who responded promptly to defend the Bolivarian Revolution against a right-wing coup.

Since 2002 there have been many other attempted coups masterminded by Washington trying to destroy the Bolivarian project under president Nicolás Maduro. But the civic-military union remains strong today and Chávez’s slogan “Todo 11 tiene su 13” remains a continued reminder of the determination of Venezuelans.