This Friday, March 18 is the launch date of Venezuela’s new social media platform, announced President Nicolás Maduro. He expressed confidence that users around the world will be impressed with the news provided on the digital platform.

The head of state issued the comments during a working meeting about the economy, dedicated to the sixth anniversary of the Local Supply and Production Committees (CLAP). The CLAP food service provides subsidized food to millions of Venezuelan households.

“Venezuela is going to surprise the world with something that we are going to launch on Friday,” Maduro said, speaking about the new social media network.

However, he preferred not to provide additional details about the platform, or the steps to follow to find it. Instead, he invited Venezuelans to pay attention to the launch and corresponding announcements, which will take place on March 18.

Likewise, the president insisted on the importance of multiplying, inside and outside Venezuela, the great achievements of People’s Power, providing solutions to needs.

The president encouraged people to use tools such as TikTok, Instagram, and Facebook, in addition to the innovative new platform that Venezuelans will soon possess to share accurate and objective news. 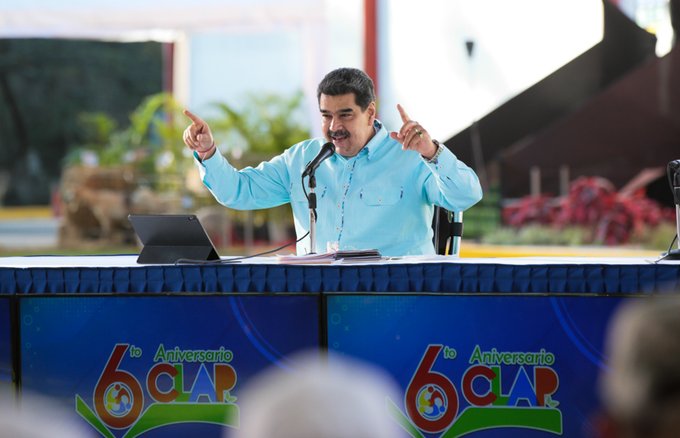 Financing CLAPs
While celebrating the sixth anniversary of the creation of CLAP, it was announced that a government team will work to guarantee support for these programs, so that CLAP strengthens its capacity to provide essential food items to Venezuelans.

“We are going to move the machinery of the productive portfolios so that the money reaches those who produce,” President Maduro said.

Proposals from grassroots organizations were presented to the government. These encouraged direct access to communities through the communal markets, and the promotion of agricultural, fishing, and livestock production in spaces that also serve as schools.

The administration also indicated that it would promote education and an efficient public healthcare system as pillars of social welfare, and promote small-, medium-, and large-scale agri-food enterprises directly linked to CLAP.

Other proposals raised by social movements aim to achieve self-management of public services. Of 36,000 CLAP outlets, 70% are in the hands of women, in the role of community chiefs and leaders, noted the head of state.

Teamwork
The president also encouraged differences of opinion between grassroots organization such as CLAP, Communal Councils and Bolívar Chávez Battle Units, to continue to be resolved democratically. “I take advantage of this sixth anniversary to call on the leaders, and women leaders, to unite at the base, to work together, to smooth out the rough edges … and unite for the people,” he said.

President Maduro highlighted the quality of national agricultural production: “the productive Venezuela, the Venezuela that works—that is what’s pushing our country forward, that is making our economy grow. We have to demonstrate it.”

Finally, President Nicolás Maduro reported that this week the 1×10 method of good governance comes into force. This method will put into practice all the proposals from the electorate, along with strategies to improve coexistence, peace, and dialogue among Venezuelans.

With the 1X10 method, in use by the United Socialist Party of Venezuela (PSUV) for years, PSUV leaders ask each member to reach out to 10 neighbors, friends, or colleagues, to encourage each of them to participate in the electoral process.

“We have applied the principles of the struggle of all the peoples to win on this food battleground that intends to undermine the territorial, community, family stability of Venezuela,” President Maduro said.