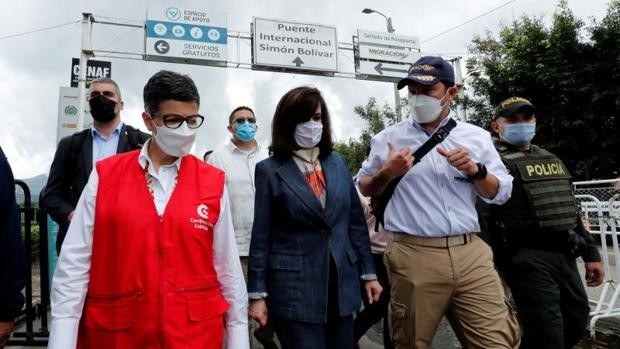 This Saturday, February 27, Venezuelan President Nicolás Maduro announced that, in view of the visit of the Spanish Foreign Affairs Minister Arancha González Laya to the Colombian town of Cúcuta close to the Colombia-Venezuela border, his government will review “thoroughly” all the relations it has with Spain “at all levels.”

“We are going to thoroughly review our entire relationship with Spain at all levels,” said Maduro in a televised broadcast. “Enough of aggressions. We warned the government of Spain in time—our foreign affairs minister warned the government of Spain, that we are going to respond to any aggression that comes, whether be words, actions, or diplomatic or political activities. Enough of hypocrisy,” added the president.

In his speech, the Head of State described the behavior of the Spanish diplomat as “hypocritical,” pointing out that she was supporting “the xenophobic policy of the Colombian government against Venezuelans,” and indicated that, henceforth, “whoever wants good deals, has to give respect and good treatment to Venezuela,” as his government will not accept any more foreign interference.

President @NicolasMaduro : "What is #Spain chancellor doing on the border of Colombia with Venezuela? Instead of going to the Mediterranean to find the brothers who come from Africa fleeing the war. Enough of the hypocrisy!”
Venezuela to re-evaluate whole bilateral relations! https://t.co/kaOgFF4vGN

RELATED CONTENT: Venezuela Ratifies its Rejection of International Court of Justice Decision on the Essequibo

In addition, Maduro criticized González Laya for not taking advantage of her visit to Colombia to speak out against the massacres of social leaders and human rights defenders and, instead, preferring to go to the Colombian border to “speak against Venezuela.”

Regarding the diplomatic double standards of the European Union, he referred to the neglect of the bloc countries towards migrants fleeing wars and destabilizations in Africa and dying in the Mediterranean Sea by thousands. In this regard, he urged the Spanish foreign affairs minister to assume the role that corresponds to her, instead of interfering in internal affairs of Venezuela. “Go to the Mediterranean and seek and give refuge to the thousands of Africans who die crossing the Mediterranean,” advised the Venezuelan president.