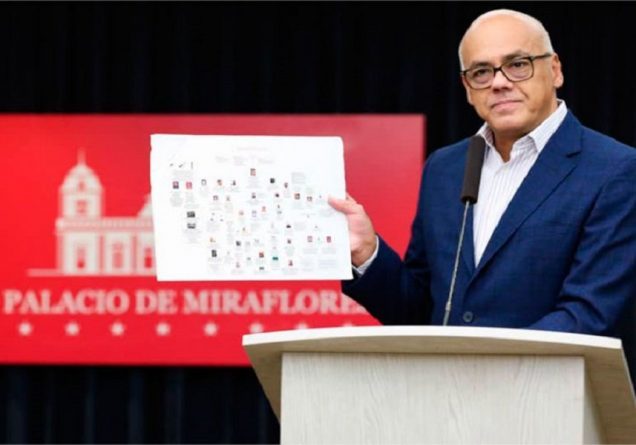 The Vice President of Communication, Tourism and Culture, Jorge Rodríguez, presented on Wednesday evidence of a plan that involves the Venezuelan and international right in a new coup d’etat attempt against the constitutional president of the Bolivarian Republic of Venezuela, Nicolás Maduro.

This operation aimed to free Venezuelan General Raúl Isaías Baduel, who is detained in the facilities of the Bolivarian National Intelligence Service (Sebin), and then transfer him to the headquarters of Venezolana de Televisión, in Ruices, Miranda state, to proclaim himself President of the nation (yes, you are reading right).

This information was confirmed by First Lieutenant Carlos Eduardo Lozada Saavedra, who made a statement to Venezuelan justice system authorities through a video.

The evidence of this plan was collected in more than 56 hours of video showing destabilizing plans, which are in the hands of the intelligence agencies of the Venezuelan State, which for 14 months have been following these terrorists.

Rodriguez reported that 140,000 machine gun cartridges were seized; that the incursion of Israeli, Colombian and North American agents was planned in three predetermined combat groups to capture President Maduro, take the air base of La Carlota and Miraflores Palace. “All this with the support of the United States government,” he said.

These groups are called Sucre, Lander and Ulysses. The first sought the capture and murder of the Venezuelan Head of State; of the president of the National Constituent Assembly (ANC), Diosdado Cabello; of the special agent for the state Táchira, Freddy Bernal , and of the first lady, Cilia Flores.

The Lander group sought to take over the headquarters of the Military Counterintelligence General Directorate (DGCIM) and capture the Minister of Popular Power for Internal Affairs, Justice and Peace, Néstor Reverol, as well as capture the Ayala Battalion, Bolívar Battalion and La Carlota Air Base.

The Ulysses Group planned the capture of the new director of the Sebin, general in chief Gustavo González López, Rodríguez said.

The evidence of this new plan was shown in a “Hampograma ” of the military groups, riots and terrorist actions that were to be perpetrated between June 23 and 24 of this year.

Rodriguez stated that the person in charge of these operations is in the Dominican Republic and is the retired Brigadier General Eduardo José Báez Torreaba, alias “Mariscal”, (uncle of the first Lieutenant Carlos Eduardo Lozada Saavedra), who explained part of the terrorist operations.

Former agents of the Body of Scientific Investigations, Penal and Criminalistic (CICPC) would participate in this, of whom commanders “Marina, Cheo, Camilo and Gonzalo” have already been captured.