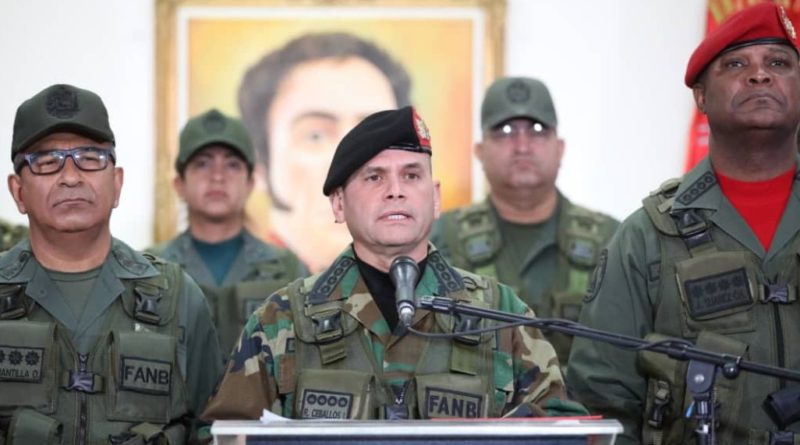 The Bolivarian National Armed Forces (FANB) ratified their categorical rejection of the new maneuvers orchestrated by the United States government and its attacks against the constitutional president of the Republic, Nicolás Maduro, after its false accusations against him and senior officials of the national government of alleged acts of drug trafficking and terrorism, the request for rewards for his capture and the involvement of the US government in an attempted coup d’etat admitted by the Venezuelan fugitive Clíver Alcalá. In the statement, they categorically reject “the extravagant and extreme accusations made by the United States Department of Justice against the constitutional President and Commander-in-Chief of the FANB, Nicolás Maduro.” Likewise, they point out that “we strongly reject the accusations against General-in-Chief Vladimir Padrino López, Vice President of Political Sovereignty, Security and Peace and Minister for Defense, as well as other Venezuelan political and military leaders.”

They point out that “this creeping attack of the North American empire occurs precisely at a critical moment for humanity, just when it is fighting for life, trying to contain Covid-19, and before which, the Bolivarian government is achieving effective results.” “The FANB is made up of patriotic men and women who, from their Military High Command, stand firm against evil to fulfill our oath to defend the country and its institutions and never abandon our superiors, to win by honor and national dignity. The FANB is a monolithic body to defend Venezuela from external and internal enemies,” said the head of the Strategic Operational Command of the Bolivarian National Armed Forces (Ceofanb), Remigio Ceballos, this Friday.

Complete statement
“The Bolivarian National Armed Force categorically rejects the extravagant and extreme accusations made by the United States Department of Justice, against the citizen Nicolás Maduro Moros, Constitutional President of the Bolivarian Republic of Venezuela, our Commander in Chief; General Citizen in Chief Vladimir Padrino López, Vice President of Political Sovereignty, Security and Peace, and Minister for Defense, as well as other important political and military leaders of the Venezuelan State.”

“Without shame, this creeping attack of the American empire occurs precisely at a critical moment humanity is experiencing, when it is fighting for life trying to contain COVID-19, before which the Bolivarian Government, through the civic-military union, is achieving effective results and adequately attending to the basic needs of its population. Likewise, this onslaught arises just after a plan of violent actions to be carried out from Colombian territory was unveiled, the objectives of which would be authorities of our country. It seems that the frustrated attempts to overthrow the legitimately constituted government have led them to formulate judicial entelechies, which will undoubtedly deserve the forceful rejection of the international community.

It can be seen at a glance, the treacherous intention of discrediting democratic institutions and making invisible the extraordinary sacrifice that millions of Venezuelans make every day, who overcoming the sanctions and the economic-financial blockade imposed by the empire itself, and which have been classified as a crime against humanity, defeat adversities to conquer peace and national development. It is also very easily inferred that they try to divert attention from the enormous difficulties that their capitalist health system presents in dealing with the pandemic that currently plagues us, and from the electoral race for the reelection of Donald Trump, who will go down in history as the most disastrous and irrational of the American presidents.

These signals, totally devoid of any type of evidence, are intended to stain the morale of a handful of patriots who have dedicated their lives to the service of the Nation, and contrary to what is indicated, fight with vehemence and revolutionary ethics, the scourge of the drug trafficking generated in Colombia, where according to the UN Office on Drugs and Crime, 70% of the world’s cocaine is produced, 93% of which reaches the United States via the Pacific route. In this sense, the magnanimous effort that the FANB has made in combating this crime must be highlighted, highlighting the neutralization of more than 189 aircraft used for drug trafficking, all within the framework of the Control Law for the Comprehensive Defense of Airspace .

President Nicolás Maduro Moros is a renowned social leader forged in union struggles for the demands of the working class, who promotes a humanist and social justice project for our beloved homeland; He has also served as an exceptional Commander in Chief. For his part, General-in-Chief Vladimir Padrino López, is a General Officer with a refined academic and professional career, who enjoys a high moral ascendancy both inside and outside the institution, at the head of which he has assumed complex challenges for more than five years as Minister of the Popular Power for Defense. For these reasons, the FANB ratifies their absolute loyalty and their unwavering commitment to continue accompanying them in the battles that we wage permanently to guarantee health, safety,

Clinging to the traditions handed down to us by the Liberator Simón Bolívar and the Supreme Commander Hugo Chávez, we reiterate to the entire world that the American empire and its allies will never bend our dignity and the irrevocable decision to be free, sovereign and independent.