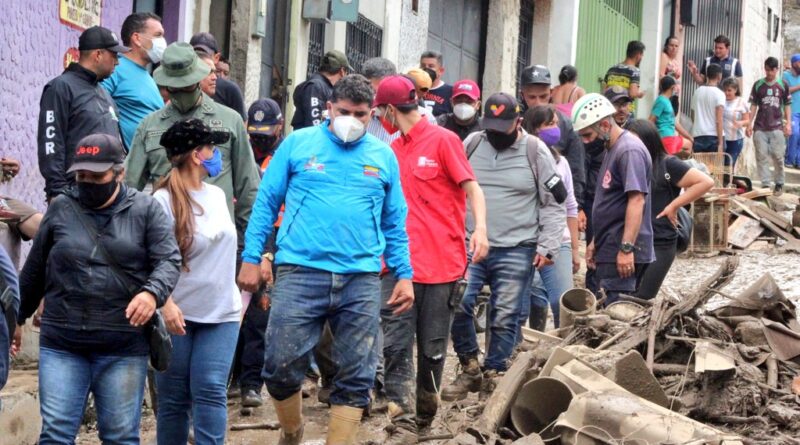 Authorities of the Venezuelan government have been deployed all over the country to attend to the people who have been affected by the heavy rains that have occurred in the last two days.

On Tuesday, August 24, during a phone call with President Nicolás Maduro, the Protector of Mérida state, Jehyson Guzmán, reported that personnel are deployed in the seven municipalities most affected by the rains.

Guzmán explained that at least 804 houses have been affected by the mudslide in the mountainous state; 70 houses were washed away due to the overflowing of a river; another 60 houses suffered severe structural damage, and at least 120 houses need to be rebuilt.

He also added that about 400 families have lost property; 71 kilometers of roads have been damaged; and 6 persons are missing.

The death toll due to heavy rains in Merida state rose to 15, of them two are from Sucre municipality and the rest in the Mocotíes Valley.

“I have approved resources to attend the people during these rains, a consequence of climate change,” announced President Maduro. “All my solidarity with the people of Mérida. I am signing a decree so that the protectorate can act with greater efforts.”

Guzmán, who is also the PSUV candidate for the governorship of Mérida in November 21 elections, informed that machinery from different ministries have been employed, which have attended to at least 40 large-scale collapses on the roads.

In this regard, he criticized the state governor Ramón Guevara for not having provided a single equipment to serve the localities affected by the rains and the landslides.

As part of his report, Guzmán added that the mayors of the affected regions have authorized food and ordered the delivery of CLAP combos for the affected families, in addition to the reactivation of the cooking gas service in the areas.

Guzmán regretted that because of the rains the cultivators have lost their crops, especially those whose lands were close to the Mocotíes River, and the economy of the state depends on agriculture.

Report on rains throughout the country
President Maduro announced that 11 states of the country have been affected by the rains. Specifically, 85 municipalities have been severely affected. The president also stated that due to the deployment of emergency prevention system, the death toll has not been worse.

The Venezuelan president explained that at least 8,098 houses were affected by the rains all over the country; 9,322 families have been affected; 4 persons have been rescued, another 13 are still missing; and 116 roads and 10 bridges suffered damaged.

Nationwide deployment
When interviewed this Wednesday, August 25, by the state channel Venezolana de Televisión (VTV), the Minister for Internal Relations, Justice and Peace, Remigio Ceballos, informed that an emergency alert system has been permanently activated, which is a logistics system that allows the authorities to dispatch all the requirements at all hours. “Only in the state of Mérida we have sent 17 tons of supplies including drinking water, food, household goods, and another logistics shipment is leaving,” he informed.

Likewise, Ceballos explained that his ministry has activated the Simón Bolívar humanitarian task force with personnel specialized in search and rescue, the same task force that has carried out humanitarian missions in multiple Latin American and Caribbean countries that have suffered natural disasters. That task force has been deployed to guarantee security and well-being of the Venezuelan people in this time of heavy rainfall and floods, reported Ceballos.

The minister added that the teams are working tirelessly to attend to the needs of all those affected, informing that 10 tons of supplies have been sent to the Jesús María Semprúm municipality in Zulia state. “We are with them, activated 100% to serve all those affected by the rains,” he emphasized.

“We are taking care of the 54, 543 people affected by the rains—more than 14 thousand families in 87 municipalities of the country,” stressed Ceballos.

He added that the government is working hard in coordination with the governors of the states. “There are 12,649 personnel from Civil Protection, firefighters, the FANB, among others, who are carrying out arduous work in a coordinated manner to provide the support that Venezuelans need,” he stated.

Featured image: Venezuelan authorities, military and emergency teams have been deployed on the ground in the Mocotíes Valley since Tuesday. Photo: Twitter / @JEHYSONGUZMAN