Delcy Rodriguez, Venezuela's Vice President presenting the latest report sent to the International Criminal court on the illegal sanctions issue. Photo courtesy of the office of the Vice President of Venezuela.

Venezuela has submitted to the Prosecutor’s Office of the International Criminal Court (ICC) a new report containing evidence on the damage caused by the illegal sanctions—the unilateral coercive measures imposed by authorities of the United States and the European Union. The report also provides evidence on how the United States government and the European Union have intentionally issued them in order to make the Venezuelan people suffer painful situations, to create conditions for overthrowing the constitutionally elected government of President Maduro. This was announced by the Executive Vice President of the Republic, Delcy Rodríguez, at a press conference at the Miraflores Palace on Tuesday, August 24.

“With this report we have shown the effect and the damage caused to the entire population as a result of the crimes that have been committed by the US government and those who have joined this criminal blockade against Venezuela, impacting its population,” announced the vice president.

Rodríguez explained that the report includes reliable evidence of crimes against humanity perpetrated against the civilian population of Venezuela. “We have sent the open confessions of the highest authorities of the government of the United States; we have also consigned evidence and data on the impact it has had on the child population, not only in vaccination but also in nutrition,” she explained.

The vice president denounced the systematic attacks against the Bolivarian Republic of Venezuela as crimes of murder, persecution and extermination against the Venezuelan civilian population. In addition, she chronologically stated the attacks and explained their consequences.

The vice president pointed out that the first report to the ICC was presented on February 13, 2020, outlining the damage caused by the imposition of unilateral coercive measures. “There we stated that there is a systematic and generalized attack against the civilian population, through measures that, despite having been adopted in the territory of the United States of America, caused damages in the Venezuelan territory,” she stated.

Vice President Rodríguez stressed that the objective of this policy of imperial aggression against Venezuela is to overthrow President Nicolás Maduro’s government.

“They don’t care about the suffering they have inflicted on the Venezuelan people,” she decried. “They say it: if children are to suffer, we will make them suffer… women, men, the entire civilian population, senior citizens. The result does not matter. For them, the important thing was to ignore the will of the Venezuelan people.”

Chronicle of a systematic and generalized attack
Vice President Rodríguez reminded that the imposition of unilateral measures against the entirety of the Venezuelan population started in 2014 with the Executive Order of then US President Barack Obama, declaring Venezuela “an unusual threat to the government of the United States, to its foreign policy, to its security. The Executive Order and the Law of Emergency Aid and Assistance to Democracy and Development in Venezuela are the two laws that support this entire framework of criminal blockade against Venezuela,” explained Rodríguez.

She emphasized that these executive orders were directly aimed at affecting the economy and geopolitical significance of Venezuela.

The vice president displayed a compilation of public statements made by US officials on the sanctions.

She showed an official statement of the US State Department made on January 9, 2018, in which the US government body confessed that the pressure campaign against Venezuela was working, causing a total collapse of the Venezuelan economy, and so they were going to continue with those policies. 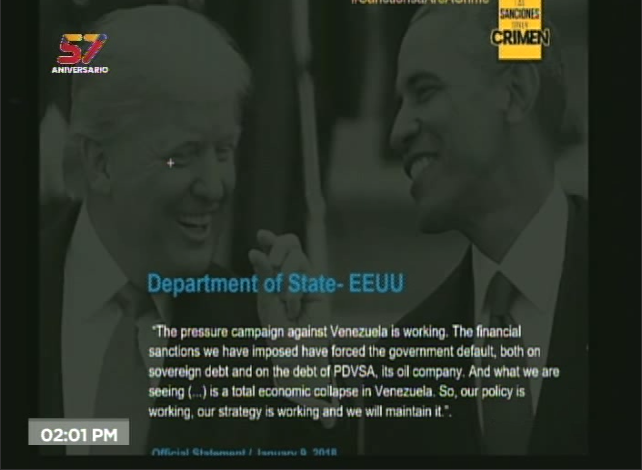 That same year, John Bolton, who was the US secretary of national security, called for the freezing $7 billion worth of PDVSA in assets in the United States and $11 billion of its annual revenue. 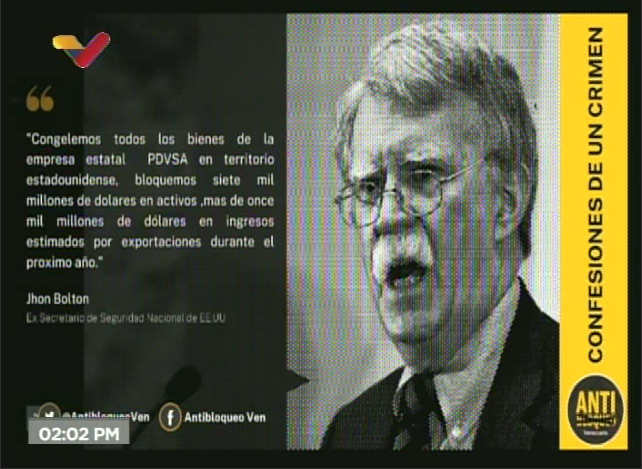 William Brownfield, who was then the US ambassador to Venezuela, also pointed out that the sanctions would have an impact against “the entire people” and that “the best solution would be to accelerate the collapse,” despite being certain that it would cause grave suffering to millions of Venezuelans. 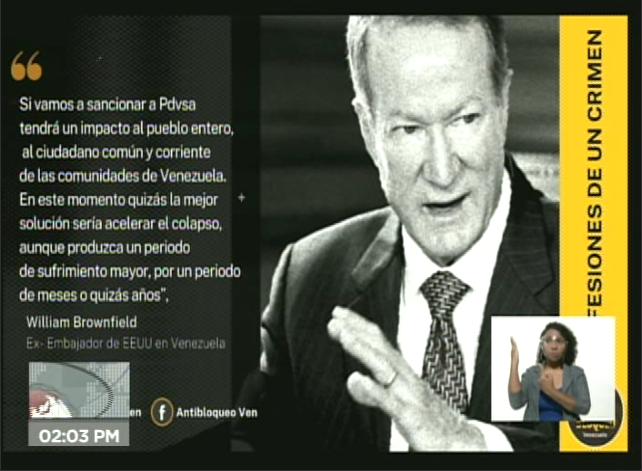 In 2018, then US Secretary of State Mike Pompeo declared that part of the sanctions against Venezuela obeyed CIA recommendations made to then President Donald Trump. 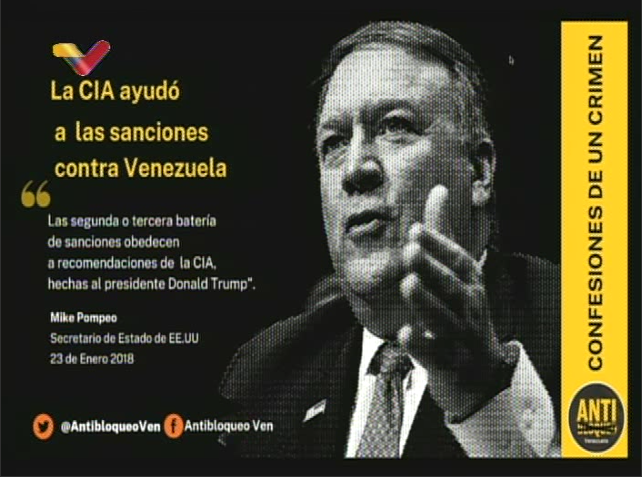 Craig Faller, head of the US Southern Command, declared recently, in March 2021, that the sanctions had sought the destruction of the Venezuelan economy, but admitted that they “have not produced the desired result.” 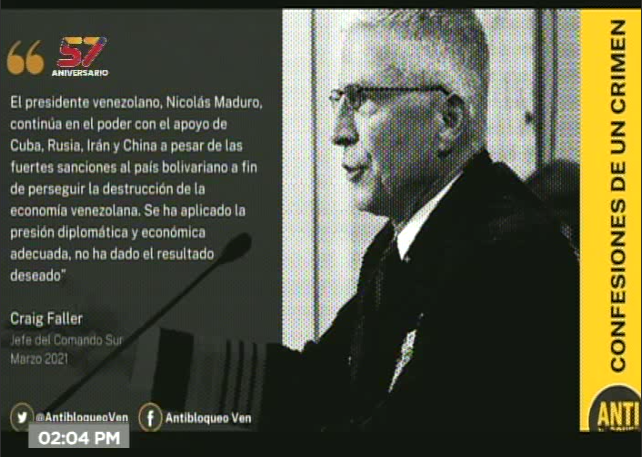 Rodríguez explained that the blockade of the oil industry, that began with Obama’s Executive Order, was tightened further in 2017, 2018 and 2019. “All these executive orders were aimed at suffocating the Venezuelan economy and causing the collapse of the Venezuelan economy, as stated the US authorities,” decalred the vice president.

Rodríguez showed, in a graph, the variation of the per capita GDP of Venezuela (red line) compared to other regions of the world (green), indicating that Venezuela’s per capita GDP was even above many other countries until 2017, when it started falling steeply due to policies of “maximum pressure” against the country, launched by the US and the European Union.

In the same way, she showed that these unilateral measures caused a dramatic and severe fall in the foreign exchange earnings of the Bolivarian Republic of Venezuela and denounced “the dispossession of Venezuelan gold that was deposited in the Bank of England—more than 31 tons of gold; the blocking of liquid money worth more than $7 billion in foreign accounts.”

“Venezuela, within a short period of time, in five years, is in fifth place with the highest number of unilateral coercive measures compared to other countries—some thirty countries illegally sanctioned in the world,” said Rodríguez.

She stressed that the criminal blockade has been intensified with the COVID-19 pandemic, affecting Venezuela’s access to vaccines and medical supplies for the population. 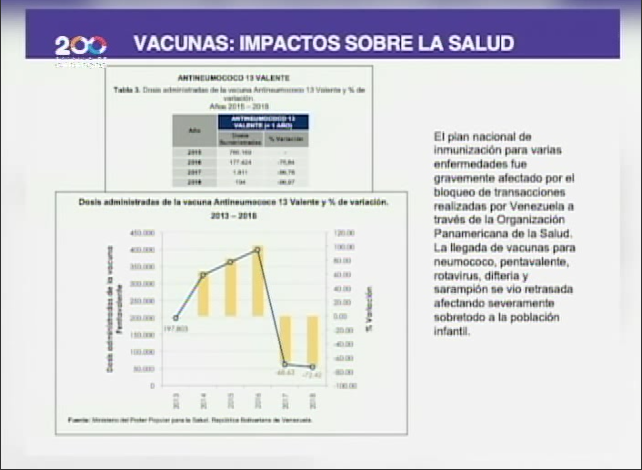 In addition to the denial of the resources, Citibank informed that the same resources—assets of the Venezuelan State—had been transferred to the United States Federal Reserve.

“With the blatant theft of liquid resources from Venezuela, the United States passed the money to Juan Guaidó for the payment of lawyers and for his maintenance; recently 6 million dollars were transferred to this criminal,” condemned Rodríguez.

Venezuela goes head-on against the blockade
Vice President Delcy Rodríguez assured that despite the blockade and the criminal aggression, Venezuela has received assistance and support from friendly countries and the population has received care during the pandemic and in all areas, “thanks to the support of China, Russia, Iran, India, Turkey, Cuba.”

She also highlighted the damage perpetrated in other services such as food and drinking water. “We have a response from the companies that supply pump equipment and power supply systems, who say they cannot supply equipment and spare parts to Venezuela because of the sanctions,” she explained. 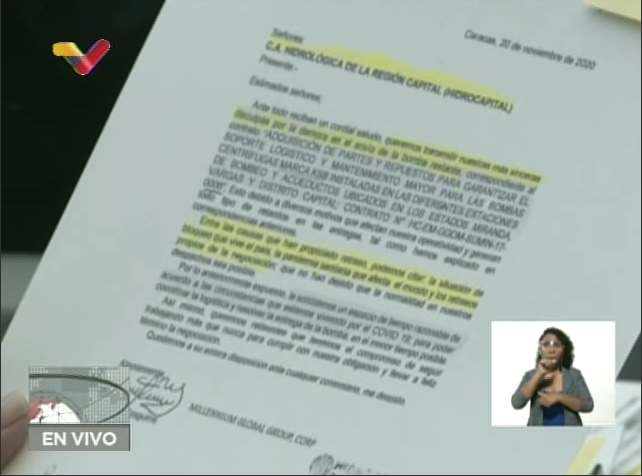 Another letter sent to the Venezuelan state-owned company Hidrocapital indicated that the company that supplied certain submersible pumps was disabled by the sanctions of the US Office of Foreign Assets Control (OFAC), preventing the pumps from being delivered for the time being. 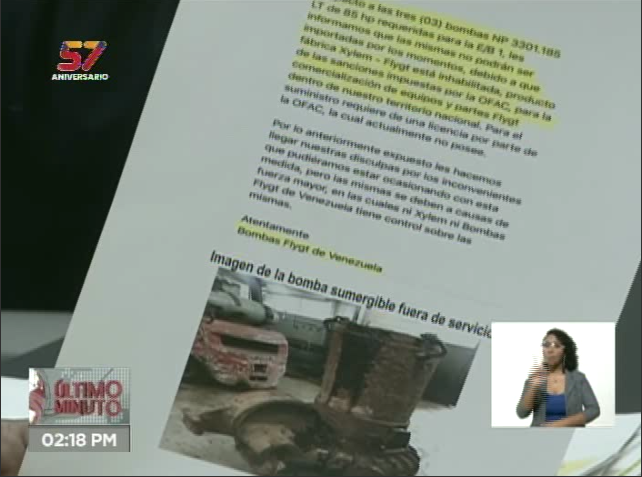 The Hidrolago company (public utility water supplier in Zulia state) also received communications from suppliers, informing the company that the system to power water pumps cannot be sold to Venezuela due to the sanctions imposed by the US and the European Union. 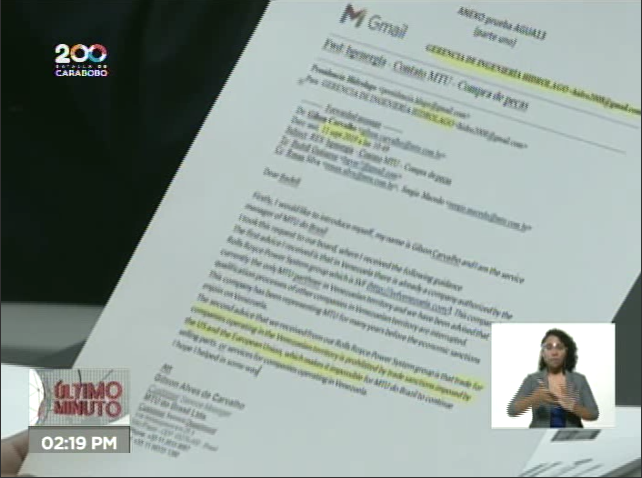 Rodríguez also showed a letter from a shipping company that was going to bring spare parts and pumps to recover the La Mariposa reservoir plant, which supplies drinking water to a part of Caracas. The shipping company informed that, due to the sanctions of the US and the European Union, there is no possibility of shipping these supplies to Venezuela. 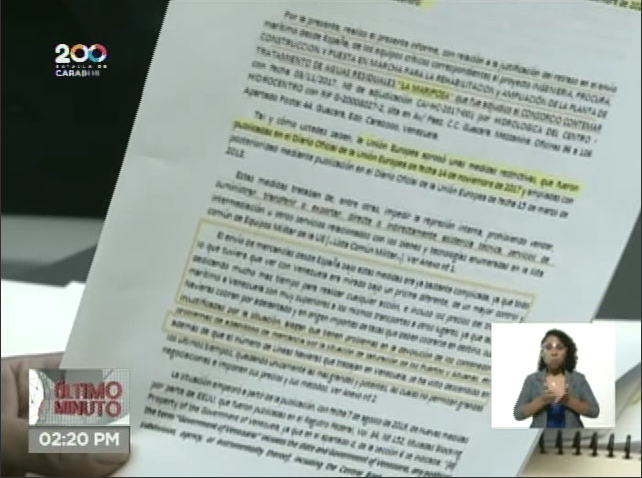 Similarly, the vice president showed how since 2014, there has been a fall in food imports. “With these unilateral coercive measures, the CLAP program for the production and distribution of food for the Venezuelan people was sanctioned, a confessed crime,” she decried.

Accompanied by Foreign Affairs Minister Félix Plascencia, the vice president was emphatic in stating that despite the aggression and criminal policy of the United States, Venezuela, under the leadership of President Nicolás Maduro, is in the forefront to counteract the damage and the inhumane acts inflicted upon the Venezuelan people.

“We assure the Venezuelan people of the commitment of the Bolivarian government to defend the legitimate rights of our country, to defend the happiness of our people, and to defend the sovereignty and national independence of Venezuela,” concluded Rodríguez.

Featured image: Venezuelan Vice President Delcy Rodríguez presenting the latest report sent to the International Criminal Court on the illegal sanctions issue. Photo courtesy of the Office of the Vice President of Venezuela.