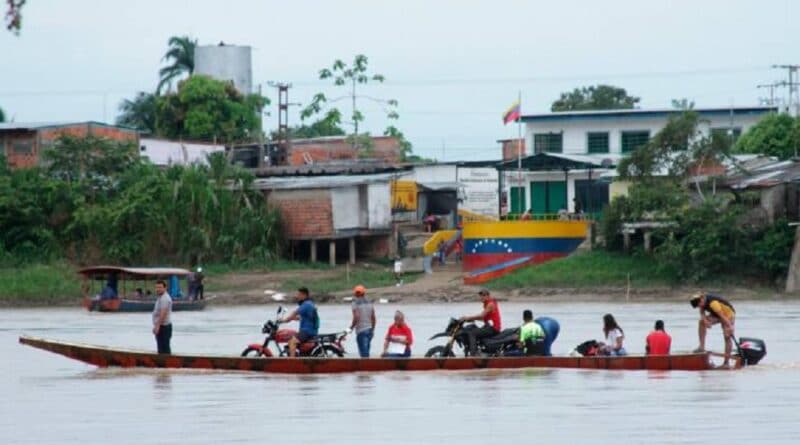 Caracas, Monday, March 29 (OrinocoTribune.com) — More than 600 Venezuelans who fled to Colombian territory are returning to their homes in Venezuela following clashes last week between the Venezuelan Army and paramilitary groups from Colombia. The criminal groups seek to control the border area to replicate their modus operandi in Colombia, related to extortion and drug trafficking.

As can be seen in video footage released by Telesur journalist Madelein García, civilians are being received by Venezuelan officials from the Bolivarian National Guard.

In the press conference Minister Padrino explained that an intelligence operation initiated last January led to the military deployment that, firstly, allowed them to seized four narco-jets, and was followed by clashes with the Colombian paramilitary criminals, who ended up being expelled from Venezuelan territory into Colombia, where they operate freely in coordination with Colombian authorities.

Padrino López explained that after these clashes a PsyOps campaign was launched using social media corporations including Twitter, and apps such as WhatsApp, belonging to Facebook, to distort the facts and present the clashes as battles between the Venezuelan Army and dissident anti-Chavista FARC groups, or spreading lies about the Venezuelan Army killing children or setting houses ablaze. “The Venezuelan Army does not operate like that,” said Minister Padrino, perhaps alluding to the countless documented cases of reprehensible acts perpetrated by the Colombian Army in contravention of the most basic human rights.

The Venezuelan Minister of Defense also highlighted that, despite the efforts they have launched to coordinate with Colombian authorities including Colombia’s Minister of Defense, none of the countless attempts at making contact have been reciprocated. This is one of the factors leading Venezuelan authorities to suspect that the incursions may represent covert Colombian-US operations to finally generate a conflict in order to achieve with violence what they have not being able to achieve through two years of unconventional war against the Bolivarian Revolution in Venezuela.

Some might be escaping COVID-19 in Colombia
According to Colombian media, the mayor of Arauquita —the Colombian town next to La Victoria, Apure state—Etelivar Torres, reported this Sunday, March 28, the first four positive cases of COVID-19 in shelters harboring displaced Venezuelans.

Torres indicated that this situation in Arauquita could become a “new health crisis” but that they hope it will be “controlled quickly and that it does not overwhelm us.” The small Colombian town has confirmed 504 cases of COVID-19 and 15 deaths, according to the Ministry of Health. Colombia remains one of the Latin American countries most affected by the pandemic, with almost 2.4 million cases and 63,000 deaths, while Venezuela’s more responsible management of the pandemic has resulted in only 155,000 cases and 1,550 deaths.

On Saturday, 600 displaced persons were counted as returning to Venezuela, but local Colombian authorities spoke of about 4,000 Venezuelans displaced to fifteen shelters. Venezuelan experts point out that Colombian authorities are accustomed to inflating the number of Venezuelan living in their country in order to receive more international aid, most of which does not end up in the hands of those who really need it.