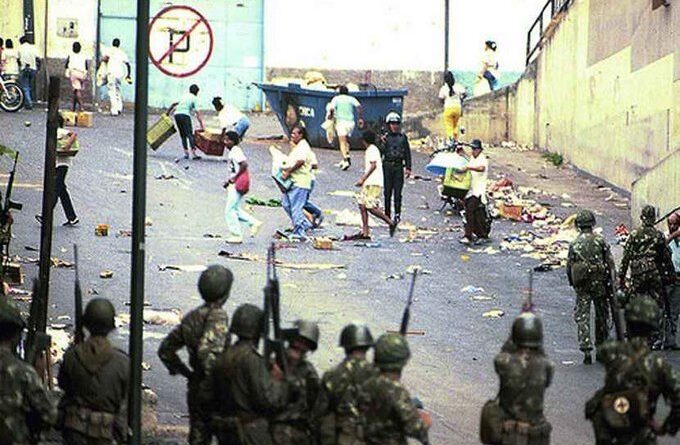 Venezuela’s Caracazo was a collective trauma, a tragedy that marked one of the darkest episodes for Latin America in the 20th century. Under the leadership of President Carlos Andrés Pérez, Venezuela’s military and police responded to public unrest by murdering thousands of civilians in late February and early March 1989. The crisis of these days is known as el Caracazo (the smash in Caracas) or el sacudón (the shake up).

The deadly events led horrified soldiers to join Commander Chávez’s secret MBR-200 movement within the Armed Forces. The Caracazo was the historical antecedent to the great popular support Chávez received following his televised appearance during the military uprising of February 4, 1992, setting the stage for his electoral victory in 1998 and the Bolivarian Revolution.

On February 27, 1989, demonstrations erupted in Caracas and through the country in response to the political betrayal—the Great U-Turn—of newly elected president Carlos Andrés Pérez. During his presidential campaign, Pérez promised that he would steer the nation to greater sovereignty, and a return to the economic boom of the 1970s. Pérez denounced the financial institutions of the Washington Consensus, describing the IMF as “a neutron bomb that killed people, but left buildings standing,” and said that World Bank economists were “genocide workers in the pay of economic totalitarianism.” As a result of this bombastic rhetoric, Pérez won the election.

However, on February 16, 1989, just two weeks after taking office, Pérez capitulated to the Washington consensus; accepted a $4.5 billion loan from the IMF, and implemented the crippling “structural adjustments” stipulated by the agreement.

“To the surprise of his own followers, he declared he was going to apply a neoliberal, IMF-dictated ‘shock therapy’ to the country at once, and without anesthetic,” recounted Hugo Chávez. “Supported by his development minister, Moisés Naím, and his planning minister, Miguel Rodríguez Fandeo, and advised by Jeffrey Sachs—then a huge fanatic of ultra-liberalism—Carlos Andrés announced the ominous measures of the ‘neoliberal package’: trade liberalization, abolition of exchange controls, massive privatization of state enterprises, drastic cuts in social programs, increases in the prices of essential products and services… The poorer classes, who three months earlier had voted for Carlos Andrés, viewed this savage ‘structural adjustment plan’ as a stab in the back.”

The adjustments included an immediate hike of bus and subway fees, inconveniencing millions of working-class Venezuelans dependent on public transport to reach their jobs each day. The Bolívar was reduced in value by 88% overnight, and business owners were accused of hoarding and price manipulation to profit from the chaos. Budgets for public services such as education and health, on which the poor and working-class population depended, were slashed.

The Caracazo
The rebellion began the morning of February 27 as commuters in Guarenas (a suburb of Caracas) refused to pay increased fares and argued with the drivers. By the afternoon student groups had erected barricades in support, and by the evening similar protests had broken out across the country. In Caracas the subway was shut down, streets were blocked, and cars and buses were aflame throughout the city. In the evening looting broke out.

Like thousands of others, journalist Rosi Baró was unable to take the bus home from work that day and had to walk home instead. “The atmosphere was increasingly strange and threatening: cops beating people with nightsticks, and opening the [steel] rolling shutters of small businesses so that people could enter and get what they wanted without paying. I was totally confused. Even though I worked in media, I had no idea what was happening. While walking, I saw increasing violence. I could not sort out in my mind a sensible response to the strange atmosphere, because red danger lights had come on inside me. Nowhere was there transportation—no vehicles on the streets, just people, lots of people, some scared like me, walking hurriedly, and others running, carrying bags of products looted from businesses.”

“Looters smashed windows or broke down doors and metal gates, and rushed into the businesses,” wrote Bart Jones. “To their astonishment, they found that many of the products that had been missing from store shelves for weeks were hidden in back storerooms… Police could identify with the pillaging residents. Most came from the barrios themselves, received meager wages, and had not been paid in weeks because of a labor dispute. Badly outnumbered, they let the hordes loot. But as the hours passed, they became looters, too. Armed groups including some in police uniforms with their faces covered by handkerchiefs arrived in trucks or even police vehicles, and hauled away the entire stock of some stores.”

The people tried to exact revenge on the elites who had profited off them for years.

The next day Interior Minister Alejandro Izaguirre appeared on television and frostily warned the public not to engage in acts of violence. His transmission was cut halfway through. It was reported that he was sick. Two hours later, Izaguirre returned to finish his message. Even more unsettling, on the evening of February 28, President Pérez appeared on television and declared martial law and a curfew. He deployed thousands of troops to Caracas, and they entered the barrios accompanied by tanks.

“Their orders were simple: Shoot anything that moved, and shoot to kill,” wrote Jones.

“It wasn’t just a Caracazo, it was a Venezolanazo,” recalled Chávez. “True, its epicenter was Caracas, but it spread to Barquisimeto, Cagua, Ciudad Guayana, La Guaira, Maracay, Valencia, Los Andes … The government panicked, imposed a curfew, and activated the Ávila Plan. This placed the capital under martial law and allowed the army to use heavy weapons against civilian protesters. The social protest was put down with the utmost brutality; massacres were committed in the poor areas, a repeat of Rómulo Betancourt’s mantra: ‘Shoot first, ask questions later.’”

“The repression was relentless,” wrote Baró. “To this day the exact number of deaths due to the militarization of the country is unknown. They tried to extinguish that social fire by massacring people with bullets, with every cry of rebellion from the buildings. During the three days of curfew shrapnel echoed against walls and windows of the working-class neighborhoods.”

The official figures admitted 300 dead but it is likely that many more—about ten times that number—were killed by Venezuela’s military and police forces. The horror left Venezuela’s people ready for a revolution, and alienated elements within the nation’s security forces.

“I saw children shot to pieces by our own soldiers,” recounted Chávez. “They even killed patients in a mental hospital. The government brought soldiers from the interior like an invading army, as if they were the Armed Forces of the IMF. Many officers who took part in the repression felt remorse and shame afterwards. They got a lot of stick. Weeks later at an officers’ meeting, I reminded them of Bolívar’s famous phrase: ‘Cursed be the soldier who turns his weapon on his people.’ I couldn’t help myself, I shouted at them, ‘Bolívar’s curse has fallen upon us. We are cursed!’”

Threnody for lives lost in the Caracazo

Venezuelan human rights organization COFAVIC won a court order that allowed them to search a Caracas cemetery (Cementerio General del Sur), where they confirmed accusations that the army had dumped bodies in mass graves without notifying families of the victims, in an area known as La Peste (the plague). Many who went missing during those days are still unaccounted for. On this day we remember all of the victims and their loved ones.

“On that day, the biggest massacre of 20th-century Venezuela was committed,” said Chávez. “On that day, the mask of Venezuelan ‘democracy’ fell off and revealed the oppressor’s most hateful face. Because in the early days of March, after the rebellion had been put down, the government pursued the systematic and criminal use of state terrorism. We must recognize that fact. It was a dictatorship disguised as a democracy. That’s why I so often say we must not forget.”