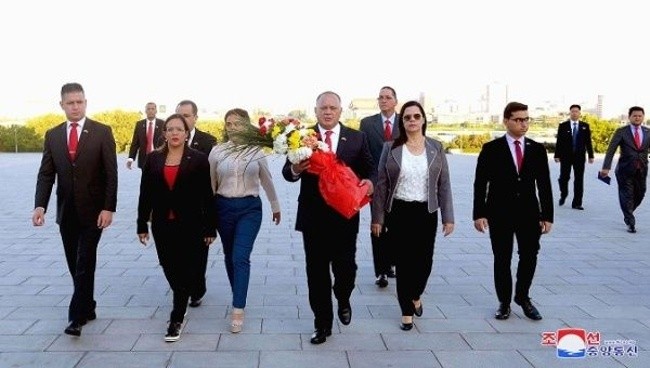 After a successful visit to North Korea, Diosdado Cabello, President of Venezuela’s National Constituent Assembly (ANC), arrived in Vietnam alongside other leaders of the United Socialist Party of Venezuela (PSUV) to strengthen diplomatic and strategic cooperation between the two nations.

As part of the agenda, Venezuela’s delegation will meet with leaders of Vietnam’s Communist Party. Both nations have already signed agreements to develop bilateral relations of economic and social interest to both countries.

Other Venezuelan figures also on the visit are Minister of Popular Power for Communes and Social Movements Blanca Eekhout, Cojedes State Governor Margaud Godoy, Executive Secretary of the Somos Venezuela Movement Mervin Maldonado Vice Minister of the Educational Communities and Union with the People Jorge Perez, as well as Jesus Faria and Julio Chavez of the PSUV National Directorate.

In North Korea, Cabello was received by a delegation led by Pak Thae Song, president of Popular Assembly, and later met other presentatives like Kim Kuang Uk, Jo Song Chol as well as Ri Hae Im, vice president of the DPRK’s Central Committee of the Socialist Union of Women.

The ANC president also paid tribute to former presidents Kim Il-Sung and Kim Jong-Il by offering a floral arrangement in front of their bronze statues in Mansudae Hill. He visited their tombs at the Sun Palace where both are laid to rest.

The whole tour, together with previous meeting between Nicolas Maduro and Russian President Vladimir Putin, represents a step forward in the strengthening of diplomatic relations between Venezuela and allied eastern nations with the intent to develop strategic ties and mutual cooperation.