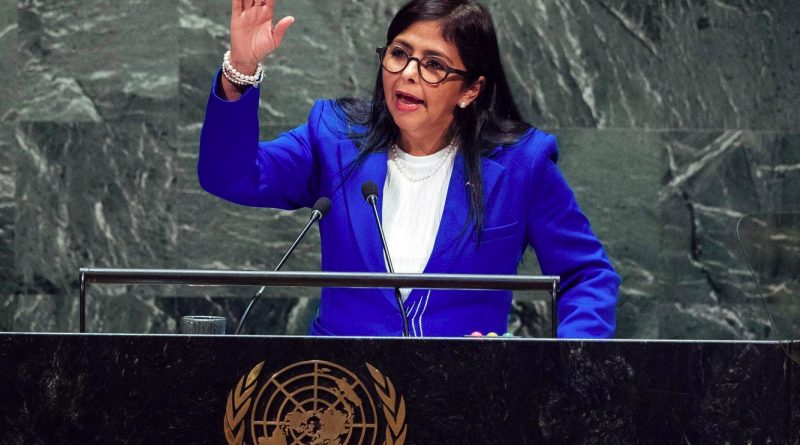 Venezuelan Vice-President Delcy Rodriguez spoke on behalf of her country at the 74th United Nations General Assembly with an impassioned and incisive speech followed by much applause. It was an accusation to the imperialist aggression against the people who cast a shadow over the United States or who refuse to be servile towards its interests. And a strong complaint against the capitalist model that is concentrating wealth in the hands of a few while being at the service of the military industrial complex. Evidence, Delcy said, speaks for itself: from the George W. Bush presidency, through Barack Obama, to incumbent Donald Trump, the United States has reached a record of 44,996 dropped bombs —121 per day. The military–industrial complex is a serious problem that is imposing an indescribable suffering to populations, regardless of their age.

But there is a new type of state terrorism today, for which it’s not necessary to resort to bombs to impose its penal measures; the control of the dollar as the world’s reserve currency. Therefore, Rodriguez explained, the United States Treasury, “the economic Pentagon,” militarized international relations and took over the resources of the Venezuelan people outside of international law. The legal system is thus eroded and “a perverse experiment against multilateralism” is implemented through Venezuela.

Between 2015 and 2018, the Venezuelan economy lost $130 billion which should have been available to meet the needs of its population through a model based on inclusion, justice, and social protection, as it is in Bolivarian Socialism. A model “deeply opposed to the pro-Monroe Doctrine project that would like to take us over again to be the backyard of the supremacist capitalism prevailing in the United States today,” added the Venezuelan Vice-President. A model of solidarity and inclusion that is raising “its flag to defend nature, to fight against poverty and inequality.”

Bolivarian Socialism, said Delcy later at a press conference, had achieved in a short time results acknowledged by important international organizations such as the Food and Agriculture Organization (FAO), UNESCO or the World Health Organization (WHO), towards whom the imperialist anger was unleashed, targeting directly President Nicolas Maduro.

Attacks, she reminded, which even included attempted murder with explosive drones that, on August 2018, was supposed to kill the Venezuelan President, decapitate the Bolivarian leadership, and also would have involved the diplomatic representatives from other countries attending the event.

The Venezuelan Vice-President also gave documentary evidence of the role played by the Colombian Administration under Ivan Duque against her country. She refuted the accusations made by the Colombian President to the U.N., based on pictures which showed one of the two Colombian guerrillas, the ELN, allegedly training on Venezuelan territory. Pictures, however, which were not taken in Venezuela but in Colombia, as it was attested to by the newspaper that had in fact obtained such material from an intelligence source.

A short length lie, commented Rodriguez, showing detailed evidence of the places where paramilitary soldiers, designated to destabilize the Bolivarian Socialism, are training in Colombia. A lie that has lasted 50 years, hiding the terrible reality of an internal war that made eight million Colombians flee from their country —six million of them were welcomed with their full rights in Venezuela.

But the hegemonic media does not talk about this reality. They train themselves instead to produce astronomic figures about the number of Venezuelans who abandon the country; distorted figures, Delcy stated, denied by the data about the increase in consumption or school registration.

A reality, that Rodriguez invited journalists to directly document by accessing the surveillance cameras in Venezuela’s control room on its frontier with Colombia. But the media, on the contrary, are refusing to do and rather hide the effect of the attacks against Venezuela. The United States Administration has carried out over 350 of these unilateral coercive measures between 2015 and 2019.

These measures define the total financial blockade aimed at an illicit appropriation of Venezuelan resources abroad and trying to suffocate the Bolivarian economy to subjugate its population and push them to rebel against their Government. In this connection, Rodriguez read the cynical statements made by the United States Administration about the “agony” that is going to be imposed on the Venezuelan people through any and all means.

But, were the sanctions against Cuba useful at all, which have lasted more than fifty years? “Did U.S. imperialism think they could subjugate the heroic people of Fidel Castro through it?” Delcy wondered, expressing her solidarity to all countries affected by the United States sanctions. She also took the opportunity to remind the world of the debt to the Palestinian people, whose rights continue being denied despite several U.N. resolutions issued during the Israeli occupation.

The Venezuelan Vice-President also expressed solidarity with the Bahamas, victims of climate change, and she denounced the “wild commercialization of the Amazon rainforest being implemented by Brazilian President Jair Bolsonaro, who let loose his extremist ideology against our green lung.”

Thanking the support of the 120 countries of the Non-Aligned Movement, the Vice-President revealed the real nature of the self-proclaimed “interim president” of Venezuela, Juan Guaido, commenting on a series of photos which portrayed him together with members of a paramilitary drug trafficking group. “In Colombia, she recalled, 70% of the world’s cocaine is manufactured and the United States is its major consumer.” And she added, “countries such as Nicaragua or those in the Middle East who know very well how the United States uses drug trafficking to feed destabilization.”

“The use of the force prohibited by the United Nations Charter, coercive measures imposed to millions of people around the world, Delcy stressed, are massively violating human rights, challenging noble ideals and the commitments of the international community.” For this, Venezuela is going to take to the International Court of Justice detailed evidence of these violations committed by Colombia, “a country were 123 former combatants were murdered, as well as 739 social leaders, all during just this year.”

The Colombian Government, Delcy said, “is refusing to collaborate with the Venezuelan justice and they are sheltering people accused of crimes and terrorism in Venezuela. A Government that is performing, together with other vassals of the U.S., to undermine Venezuela’s sovereignty, with the participation inside the country “of the same actors that organized the coup d’état against (Hugo) Chavez in 2002.” Nevertheless, eight months after Guaido proclaimed himself as President, “we have the same legitimate President, Nicolas Maduro, who has not been defeated by the imperial machine,” A President strongly committed to pursuing dialog, which is being shaped with the more moderate members of the opposition.

The Venezuelan Vice-President claimed for “the historic rights over the Essequibo,” a territory in dispute with Guyana. Venezuela requests “less arrogance” from the United States Administration, while to the U.S. population, Venezuela asks them to recognize themselves in the spirit of their poet Walt Whitman instead of one steeped in supremacism. And she concluded proposing to all, “Defend the U.N. Charter with a common front to save the world from “capitalist violence.”

Geraldina Colotti was born in Ventimiglia and has lived in Paris for a long time. He paid a 27-year sentence for his militancy in the Red Brigades. Journalist and writer, an expert in Latin America, is responsible for the Italian edition of "Le Monde Diplomatique".

Geraldina Colotti was born in Ventimiglia and has lived in Paris for a long time. He paid a 27-year sentence for his militancy in the Red Brigades. Journalist and writer, an expert in Latin America, is responsible for the Italian edition of "Le Monde Diplomatique".