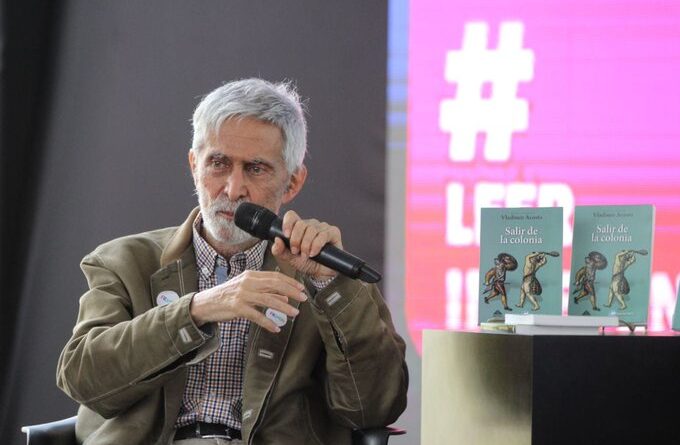 This Wednesday, November 10, as part of the programming for the 17th edition of the International Book Fair in Venezuela (FILVEN) 2021, a colloquium was held with the Venezuelan writer, Vladimir Acosta, about his book Salir de la colonia [Leaving the Colony].

During an exchange on the program The Forms of the Book with Raúl Cazal, Acosta, one of two featured authors at FILVEN 2021, said that his book aimed to present colonization as an idea to be discussed, to try to provide a solution and raise awareness of the problem in Latin America.

“I have understood for a long time that we are still ‘in the colony,’ and the most dangerous, the most serious aspect—in the book I try to demonstrate this in great detail and with many historical facts—is that the United States intends to capture the hearts and minds of the countries they dominate, as is the case of Latin America.”

The matter “is extremely serious and this colonization is affecting our identity, our language, our people,” Acosta said.

In the discussion, Acosta pointed out that this issue has become normalized for everyone on the continent, particularly in matters of cultural and religious penetration. This is evidenced in “the way we act, the movies we see, the works we read, the clothes and food we consume, even the violence that we have inherited from the United States,” Acosta said.

He emphasized that progressive governments have neglected this issue and do not realize that it is essential to fight and combat the cultural penetration of US colonialism.

“It is essential to incorporate this as a topic of discussion—colonialism—so that coloniality ceases to be an exclusive intellectual reference of the universities and becomes something that the people understand, share, and can incorporate into the struggle of the masses,” he stressed.

Latin America has not left the colony, added Acosta, because the peoples think that it [colonialism] does not exist, even while they continue to act with daily colonial and cultural patterns, which are precisely what must be confronted.

Finally, he stated that the most important thing about his work is that it brings up the issue for discussion by all sectors.

“What I want is to open a discussion, which has been tried at other times, but that the routine has swallowed up.”