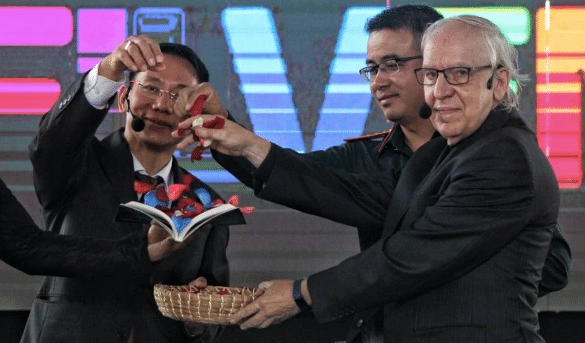 In a friendly atmosphere of fraternal bonding between Venezuela and Vietnam, the reissue of La Cita de la Historia [A Date with History], written by Vietnamese general Vo Nguyen Giap, was presented at the 17th International Book Fair of Venezuela, FILVEN 2021. The book presentation was presided over by the Ambassador of the Socialist Republic of Vietnam in Venezuela, Le Viet Duyen; the president of the Venezuela-Vietnam Friendship House, Carolus Wimmer; and Defense Attaché of Vietnam, Vu The Trung. Vietnam is the guest country of honor at FILVEN 2021.

During the presentation, Le Viet Duyen quoted Commander Hugo Chávez who had commented that “there is nothing like a good book to delve oneself into a different time and space and experience indescribable sensations from history, geography and emotionality.” Le Viet Duyen described La Cita de la Historia as a treasure turned into text, thus confirming the genius of its author, an undisputed revolutionary leader.

Ambassador Le Viet Duyen expressed gratitude for the invitation to the FILVEN 2021 and for being invited to participate in the book presentation. La Cita de la Historia deals with the Battle of Dien Bien Phu, which took place on May 7, 1954, and which was a great victory for the people of Vietnam in their fight for independence and socialism against the French colonizers.

The Ambassador stated that the Battle of Dien Bien Phu was one of the greatest and most famous in the world, and that General Vo Nguyen Giap led the Vietnamese people with excellent military strategy.

For his part, Carolus Wimmer asserted that it is an easy-to-read book, written in a memoir or diary-like format, and it meticulously depicts not only the Battle of Dien Bien Phu, but also the preparations behind it and the realization of the impossible into the possible, this is, to face an enemy a thousand times stronger and better equipped, but small and feeble compared to the consciousness of the sovereignty and independence of the Vietnamese people.

In Wimmer’s words, the book offers “a military reading of all the thoughts and reflections that go into changing tactics in the face of an enemy that was aware that this battle was going to decide history. The Vietnamese people, the Communist Party of Vietnam and its great leader, Ho Chi Minh were also conscious of this.”

The Vietnamese Defense Attaché, Vu The Trung, expressed his gratitude and pride in participating at FILVEN 2021. He stated that all Vietnamese combatants consider Vo Nguyen Giap as the older brother of the Vietnam People’s Army and the best student of President Ho Chi Minh, that is to say, Vo Nguyen Giap was the one who best interpreted Ho Chi Minh’s revolutionary thought to practice in the struggle of the people of Vietnam.

Numerous activities of FILVEN 2021 are being broadcast through the social media accounts of the Monte Ávila Publishing House on Twitter and Instagram: @monte_avila, through FILVEN 2021 YouTube channel, and through culturavenezuela.com.