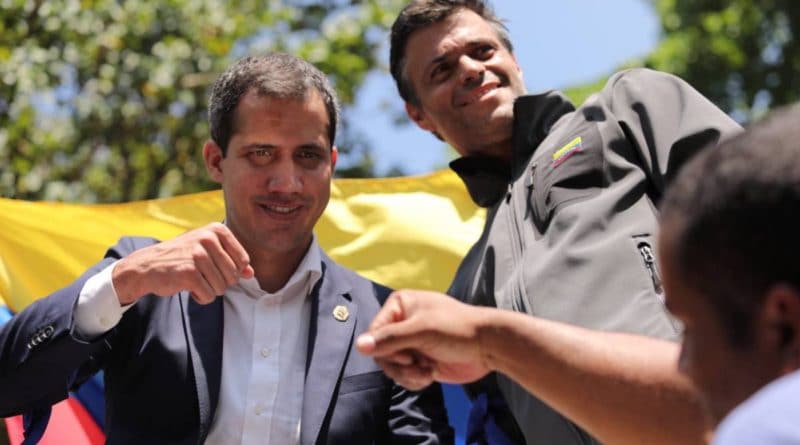 The party led by Leopoldo López has been detached from politics for years. And if it is still tied to certain institutional ligaments such as the National Assembly, even in the time it has found itself in contempt, it is because something of appearances must be kept up. But Voluntad Popular (VP) is the organization that has most notoriously led the terrorist phase of the anti-Chavista political agenda.

VP’s goals are tied to extremist political factions in Washington and Florida in the United States, and even to corporate and academic interests, which yearn for the death of the Bolivarian Republic of Venezuela and members of Nicolas Maduro’s government.

The most notable actors of VP are Leopoldo López and Carlos Vecchio , fugitives from Venezuelan justice: the first, its undisputed leader, is a graduate of Kennedy College of Harvard University, a campus that serves as managerial training for the US establishment. The other is a lawyer whose most prominent employer was (is?) the ExxonMobil company, himself being an outspoken advocate for the US oil company to the point of having mounted “an unsuccessful legal challenge” against the oil industry restructuring led by Hugo Chávez.

Without going very far, Juan Guaidó was born and raised under the banner of VP, which explains his assumption of the title “interim president” of an imaginary government backed only by the power that Washington emanates at the international level, an issue that has not been enough to achieve regime change in Venezuela (saying much about US decline).

In such a way the organization led by López is linked to certain power groups in the United States that come to replicate their ways: hiring the worst elements of society to carry out their objectives ( remember Pérez Venta the stripper ), carrying out plans that only lead to destabilization and chaos through violence.

File of a terrorist organization (supported by the drug traffickers)

This Monday, May 25, Venezuelan Attorney General, Tarek William Saab, requested before the Constitutional Chamber of the Supreme Court of Justice (TSJ) that VP be declared a “criminal organization for terrorist purposes” under the interpretation of articles 31 and 32 of the Organic Law against Organized Crime and Financing of Terrorism.

To the corporate media and related to the objectives of VP, it seems a scandal, but there is sufficient evidence to justify giving it the category of “criminal organization for terrorist purposes.” There is hardly a single attempted coup or attack against the legitimate institutions of Venezuela in which López’s party is not part of, be it on an intellectual or material level.

The VP record has its darkest chapters in the terrorist acts of 2014 and 2017, when Venezuelan opposition used the color revolution model previously tried in the former Yugoslavia, Ukraine and many other countries to force “regime change” in the country.

It is worth remembering that, in 2014, 43 Venezuelans died and another 870 were injured by the call for “La Salida” by VP together with María Corina Machado. That year Leopoldo López was arrested and prosecuted for his responsibility in detonating the color revolution.

Subsequently, with Freddy Guevara at the forefront of national coordination, and absent López as visible leadership, VP played a fundamental role in the armed phase of the 2017 guarimbas, financing, organizing and leading irregular groups with US money channeled through network of NGOs. There were more than 130 deaths and more than 135 million dollars in material losses.

2016 was not without terrorist and violent conspiracies on their part. In the middle of the year, two of their militants were arrested with money to supply terrorists and pay people to participate in looting and urban disturbances in different parts of the country. Yon Goicochea was captured with explosives to be used in a demonstration called by the opposition.

During all these stages, VP had the support and financing of the United States government. For example, Luis Florido (then VP deputy), through the efforts of Luis Almagro, was able to hold several meetings in Washington DC in 2017 to coordinate the diplomatic encirclement against Venezuela and channel funds to the coffers of the corrupt opposition leadership.

However, the emergence of the Guaidó plan in 2019 as a coup experiment by the White House inaugurated a new period of irregular violence, alternated with financial piracy and looting of Venezuelan assets abroad.

VP has received unusual amounts of funding from the State Department: with the approval of the TRUTH Act in December 2019, the party’s militants received an additional $ 400 million for destabilizing purposes in Venezuela.

Perhaps the most scandalous reference is when the relationship with the Colombian drug paramilitarism was added to the terrorist record, once Guaidó made his transit to Cúcuta, guarded by Los Rastrojos and under the protection of the Colombian government of President Iván Duque in February 2019.

López’s party has been active in operations dismantled by the Venezuelan state. In order not to go too far, Guaidó and López themselves were at the forefront of a coup attempt in 2019 that turned out to be a botched job. At the end of the year it became known that some of its members and the police they bought attempted to storm a FANB headquarters in the Sucre state to steal weapons and supply them to terrorist cells.

Now, after the mercenary attempt of May 3 and 4, knowing the details of the agreement with the contractor Silvercorp, in which the figure of Guaidó is understood as “Commander-in-Chief” of the frustrated Operation Gideon, the entire VP terrorist and criminal route is synthesized.

This is a file that will be evaluated by the TSJ to determine its responsibilities in various crimes against the nation throughout 10 years as an organization introduced in Venezuelan politics in a nominal way, even though it has decided to opt for a terrorist organization supported by the Colombian drug traffickers.

That the American media and politicians (and their puppets in South America) constantly wash the hands and faces of their members does not mean that they do not meet the profile of terrorists. This characterization is well earned.