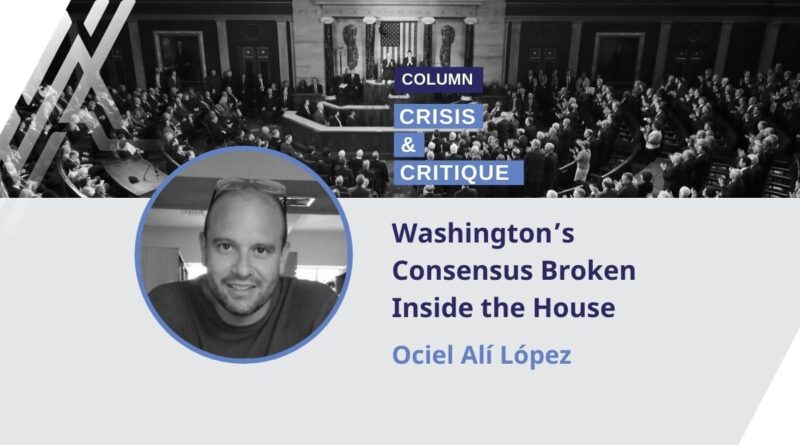 The letter sent by nineteen US Democrat members of Congress to Secretary of State Antony Blinken [on August 12] has broken the consensus that existed in Washington’s legislative body, as well as in the Democratic Party itself, regarding the country’s policy on Venezuela.

The letter specifies that “The Trump administration’s ill-conceived policies have only exacerbated the crisis and damaged US credibility throughout the region. Our government should act urgently to alleviate the suffering of the Venezuelan people by taking immediate steps to lift the broad and indiscriminate sanctions” that aggravate the “humanitarian crisis.”

When we talk about consensus on the hill, images of the Democratic Party’s approval of Donald Trump’s treatment of Venezuela come to mind. We especially remember the January 2020 State of the Nation address that the then-president conducted, in which representatives from both parties gave a standing ovation to whom they recognized as Venezuela’s president: Juan Guaidó.

On that occasion, House Speaker Nancy Pelosi offered endless signs of discomfort with Trump: she refused to shake his hand and tore the printed speech, for example. But when Trump introduced Guaidó, the Democratic Party congresswoman rose from her seat to applaud, just as she did every time Trump’s speeches turned more bombastic and aggressive on the issue of Venezuela.

On that day, no representative broke with the enthusiastic backing of the young Venezuelan politician who called for a coup d’état or a US invasion to reach Caracas’ Presidential Palace.

The hardline stance was useful to Trump in his search to win the state of Florida in the presidential elections of November 2020. But it also came at the cost of ridicule for the supposed most powerful nation in the world which bet on an interim set-up that never had any base nor control over any territory or population.

Returning to the letter in question, the nineteen Democrats point out: “By any means, the current ‘maximum pressure’ policy towards Venezuela has been a total failure.”

The interpellation of this sector of the ruling party represents a rupture of its controversial alignment with the Republican Party, in which even the “left” of the Democrats consented to the administration’s policy of economic attacks towards Venezuela.

The stance by “Chuy” García (D-IL), Ilhan Omar (D-MN) and other congressmen and women can be seen as the most evident transformation that has occurred so far in US institutional circles, which coincided with the signing of the memorandum of understanding between the Venezuelan government and opposition on August 13. This launch point for new negotiations signifies a complete recognition of Nicolás Maduro’s presidency and lacks all mention of the “interim administration” or Guaidó himself.

However, the Democrats’ letter should be understood not as the first step in taking a position against the current US policy, but the accumulation of several distinct initiatives.

Increasing pressure
Washington’s consensus on its Venezuela policy had been cracking little by little, starting in the last months of the Trump presidency and with greater intensity since Biden arrived in the White House.

In 2020, Senator Chris Murphy (D-CT) described his government’s policy on Venezuela as a “disaster” and a “comedy of errors” during the congressional hearing of Elliot Abrams, former White House Special Envoy for Venezuela. On that day, Abrams’ bet on Guaidó was revealed to be a failure by the level of criticism of the questioning he faced.

As part of the transition of US policy, the new chair of the US House of Representatives’ Foreign Affairs Committee Gregory Meeks requested that the approach imposed by the Republican Party be modified in January, and urged his colleagues to think about a multilateral approach.

Once the new Biden administration was more consolidated, Representative Jim McGovern (D-MA), who chairs the House’s Rules Committee, also calledon the president to end sanctions on June 17. McGovern tied the sanctions policy not to the possibility of removing Maduro but the punishment of the most vulnerable population, including mentioning unnecessary deaths, difficulties in receiving medical supplies needed to stay alive and causing food shortages and suffering.

With this position of two congressional chairpersons, sanctions have been questioned from an institutional context this year.

So, August’s letter is not the only sound heard in Washington’s hallways, although it does confirm the end of the bipartisan consensus.

The ending of Guaidó’s “interim government” is also an element which has helped break the consensus. Even Abrams himself, one of the masterminds of the project, has recently called for support for a strategic shift in Venezuela’s opposition away from the “era of the interim administration” towards a “unitary platform.”

This platform that is engaging with the government in Mexico is an entity that no one has really explained: it has no website, no office, and so far only serves to bring together the different “extremist” opposition currents which signed the memorandum of understanding.

Clearly there is an agreement in Washington to shift its Venezuela policy, and what is being debated is the elimination or continuation of the sanctions. But it is obvious that there are political elements in the US capital that are catalyzing a change of approach towards Venezuela.

In the August letter, for example, the representatives call for “direct dialogue with the Maduro government,” something the Biden administration has ruled out from the start. Will we see a change in his stance?

Of course, Secretary of State Antony Blinken’s dilemma, after the disastrous withdrawal from Afghanistan, is how to get out of the sanctions minefield left by Trump with as little noise as possible and without another humiliating defeat. Recent events in the Middle East have put Biden’s foreign policy in the spotlight, and in this context, any Maduro triumph (including direct talks) will be seen as a new weakness of the administration’s foreign policy.

Congress’ missive: keys to a change of approach
No one could accuse the congressmen and women who signed the letter of being close to Maduro, with the text not challenging the discourse against the Venezuelan president in the slightest: “Nicolás Maduro and his entourage are largely responsible for Venezuela’s grave political and humanitarian crisis,” it reads.

Rather, the document’s value is in demanding another approach to dealing with the Venezuela issue, which involves working with mediators and is importantly different from the US government’s previous position. It specifically argues for “engagement” with “a broad array of political actors in Venezuela, including moderate opposition sectors that are not aligned with Juan Guaidó and moderate Chavista sectors that are critical of the Maduro government.”

That is, this public call is a demand for a change of strategy, away from previous preludes to war or military intervention and towards a strategy that favors politics, dialogue and an electoral solution that the Republicans — with Democrat connivance — had blocked. It also includes an approach in which a peaceful solution to the crisis could be built without blocking or blackmailing the political dialogue or the actors involved, and gives space to Norway’s and the Vatican’s mediation.

These politicians, thus, go beyond a simple demand for a change in policy and lay out some of the keys to what this new stance may look like. The question is, however, will they succeed in imposing this vision in an environment so historically fraught with hostility against Venezuela?