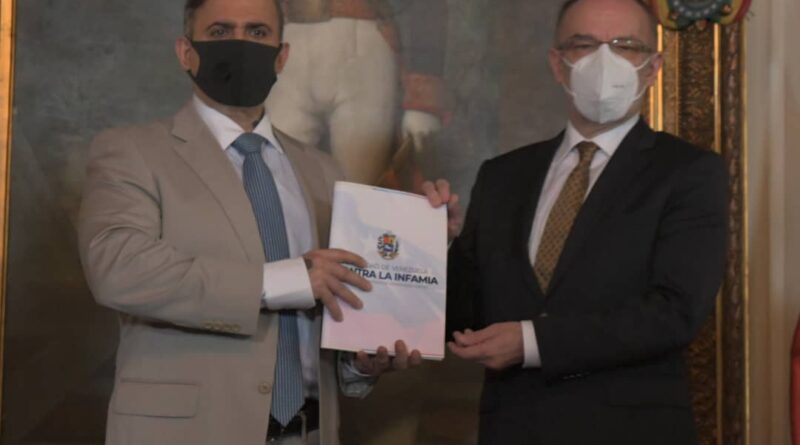 This Tuesday, the Venezuelan Government delivered the report “The Truth of Venezuela Against Infamy” to diplomatic representatives of the European Union, Russia, China and Turkey, at the headquarters of the Venezuelan Foreign Affairs Ministry.

On the delivery day, the Venezuelan Foreign Minister, Jorge Arreaza, together with the attorney general, Tarek William Saab, and the ombudsman, Alfredo Ruiz, handed a copy of this document to the Turkish ambassador, Şevki Mütevellioğlu.

RELATED CONTENT: Report “The Truth of Venezuela Against Infamy” Delivered to European Union Ambassador in Caracas

After receiving the text, the Turkish ambassador rejected the use of human rights as an excuse to promote the intervention of other countries in the internal affairs of Venezuela, this in light of the false report of the Lima Group on alleged crimes against humanity in Venezuela.

“We have received the government report on the situation and we are going to transmit the report to our government and we are also going to give it a lot of detailed attention. Turkey is a country that is very sensitive to human rights violations and we carefully follow what is happening in Venezuela to solve problems,” he emphasized.

Şevki Mütevellioğlu expressed his support for the country, stating that “Turkey is a friend of Venezuela and we are against any foreign and military intervention.”

“Efforts in this regard must be encourage and pushed, and friends of Venezuela, such as Turkey, can share their experience in this field, because it is against unilateral sanctions, against any foreign intervention and against any military intervention and I believe that the future of Venezuela should be determined only by Venezuelans. I wish everyone in Venezuela success in the upcoming elections,” said the Turkish ambassador.