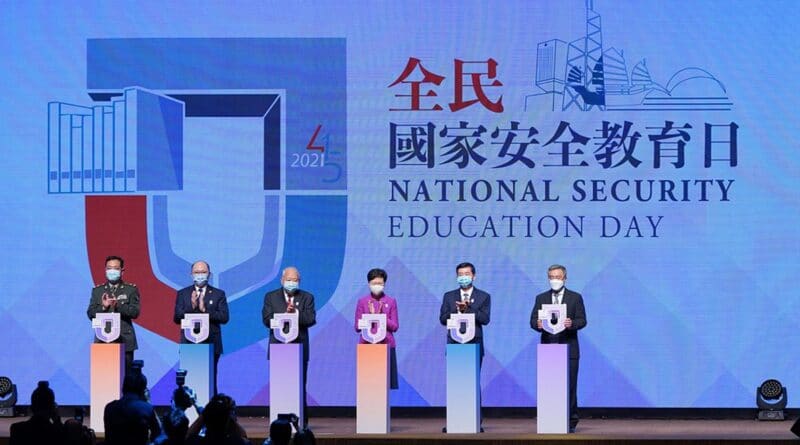 The sixth National Security Education Day falls on Thursday, with the Chinese national security agency releasing a series of cases related to the threat against China’s political security. Experts on international intelligence and security said under the intensifying China-US competition, foreign hostile forces have increased efforts to target the political security of China rather than merely conducting regular espionage activities.

The law enforcement cases released by relevant national security agencies this year are different from the past, which specifically focus on the political security issue, including suspects who have colluded with foreign anti-China forces that try to subvert the state power. Some of them are related to the Hong Kong turmoil in 2019, which try to expand the Western-backed color revolution from the special administrative region to the mainland.

“When we talk about national security, people will normally think of foreign espionage activities that target China’s military and economic intelligence. But now many recent cases show that the internal and external anti-China forces are colluding with each other,” Li Wei, an expert on national security and anti-terrorism at the China Institute of Contemporary International Relations, told the Global Times.

“This shows that the foreign hostile forces are strengthening their efforts to promote ‘color revolution’, to damage the political security of our country,” Li said, stressing that this has become the primary national security challenge that China is facing at the moment.

Regular espionage activities targeting military and economic intelligence aim to help relevant countries in their negotiations or competition with China, “but the color revolution that directly targets our political security is trying to harm the stability and public order in our country, so it’s much more serious and destructive,” said a Chinese expert on international intelligence who asked for anonymity.

Technically, a color revolution is a “smarter measure” to help Western countries, especially the US, destabilize or overthrow a country, the expert said. “After the Iraq War, the US and its allies have been more reluctant to dispatch ground troops because direct military operation will cause casualties to their soldiers and other unpredictable costs. But using social media networks, NGOs, and ‘diplomats’ to mobilize, train, fund and organize local people against the government will cost less and is easier to create chaos.”

“We can see many similar cases in Syria, Libya, Venezuela, Ukraine and Belarus. The main actors in those countries are local people guided by Western proxies, and Western military forces normally serve as a supporting role, and sometimes they don’t even show up,” he said.

Chinese analysts said the US and its allies dare not directly launch military operations against nuclear-armed major powers, like China and Russia, or their neighboring countries. So after a series of ineffective approaches like the trade war, military pressure and propaganda stigmatization, the color revolution is being used a major tactic to disrupt China’s development, and it seems like is the last card that the US can play to stop China from realizing great rejuvenation of the Chinese nation.

More infiltration
In one case among the recently released law enforcement cases that aim to promote national security education, a student surnamed Tian who studied journalism at a university in North China’s Hebei Province has become a “cub reporter” in China working for a mainstream Western media. Tian established an anti-China website in 2018 and cooked up and spread a huge amount of disinformation and political rumors.

In April 2019, Tian was invited to visit a Western country, and has engaged with more than 20 hostile foreign groups and more than a dozen officials of the host country to receive direct instruction, which requires Tian to provide “evidence” that could be used to stigmatize China. Tian’s acts have seriously harmed China’s political security, and he was arrested in June 2019, according to information provided by state security agencies.

Li said this is a typical case of the US and Western anti-China forces  infiltrating and inciting Chinese students and using them to serve the ideological warfare against China.

“Working for Western media outlets is not a problem, but if using the profession of a journalist as a cover to conduct activities to harm national security is a crime,” Li said, noting that not all employees in Western media outlets are spies, but there are some Western journalists backed by Western politicians and intelligence agencies.

In cooking-up rumors about “genocide” and “forced labor” in China’s Xinjiang, Western media are playing an important role, Li noted. “Just like this case, those ‘journalists’ are receiving funding and training in other countries, and implementing the tactic of anti-China politicians to destabilize China.”

On Wednesday, Chinese Foreign Ministry spokesperson Zhao Lijian said at the routine press conference that in 2020, the US ambassador to Turkey met with the head of the local ETIM (East Turkestan Islamic Movement) branch.

The ETIM, or Turkistan Islamic Party, is an extremist, terrorist and separatist organization that challenges China’s sovereignty and stability in Xinjiang. The UN Security Council Al-Qaida Sanctions Committee has listed ETIM as a terrorist organization since 2002.

The Chinese Foreign Ministry played a video segment at the press conference, which showed Sibel Edmonds, a former FBI translator, revealing in a 2015 interview that “a lot of these people are taken out (from Xinjiang) by the Gladio operatives…they are trained, they are armed and then they are sent back.”

Putting things together, one cannot help but wonder, what did the US ambassador to Turkey talk about with the head of anti-China force? What is Operation Gladio? Does the US intend to cause trouble in Xinjiang?” Zhao said.

According to the released information, in the past, some arrested former senior officials in Xinjiang said they even colluded with foreign separatist forces to conduct or tolerate terrorist attacks in the region, and use textbooks with extremist content in local schools, which brought serious damage to the national unity and political security.

Hong Kong frontline
Hong Kong is another frontline of China’s national security and political security. Since the national security law for Hong Kong took effect in June 2020, foreign forces behind months-long anti-government riots in the city since June 2019 have begun to waver, given that offenders would face severe sentences — as high as life imprisonment. The law would also cut off “the invisible hands” behind the chaos caused by foreign troublemakers, experts said.

It’s not surprising to many that Western forces used Hong Kong’s open city status to incite color revolution through various channels, including media outlets, student unions, political parties and labor unions by funding, training, advising them or organizing illegal assemblies, protests and riots, all tactics that could be found in the 2019 turmoil.

The implementation of the national security law helped Hong Kong restore   social order, plugging the loopholes in local security laws, Chris Tang Ping-keung, Commissioner of Police, told the Global Times on Wednesday, as the law has been functioning as an effective deterrence to those lawbreakers who endanger national security.

“The HKPF will also enhance cooperation with all institutions and stakeholders in safeguarding national security and earn more public trust and support,” he said.

Nasty acts will backfire
Apart from targeting Xinjiang and Hong Kong which are traditional geopolitical hotspots, foreign hostile forces are also keen to use issues like LGBT, feminism and environmentalism which are easy to stir heated discussions on social media via disinformation and rumors to create problems by instigating conflicts between specific groups in China, said the anonymous expert on international intelligence.

Fortunately, this kind of practice is unable to cause a significant impact or escalate into a massive color revolution, since with the modernization and development of China, the majority of Chinese netizens are able to discuss these issues with a mature and reasonable attitude, and legal civil organizations on LGBT or environment protection will distance themselves from hostile foreign intervention, the expert said.

“Those extremists backed by Western forces have been marginalized in our society and their illegal activities online and offline will be managed and controlled effectively by relevant law-enforcement agencies,” he noted.

Ironically, the US has found that some of its approaches to push color revolution worldwide could backfire, and the rise of Trumpism and intensifying Black Lives Matter movement and the Capitol Hill riot have seriously undermined its image and credibility when it tries to promote color revolutions in other countries, the expert said.

Chinese Foreign Minister Wang Yi said at a press conference after his meeting with Russian Foreign Minister Sergei Lavrov in March that the two countries will jointly oppose color revolutions and safeguard their national sovereignty and political security.

“Fighting color revolutions is an important task for China and Russia to not just protect themselves but also safeguard regional peace and stability. The two countries could cooperate on intelligence sharing, joint operations against Western illegal NGOs that would create disinformation to hype instability and cybersecurity,” Yang Jin, an expert at the Institute of Russian, Eastern European and Central Asian Studies at the Chinese Academy of Social Sciences, told the Global Times.