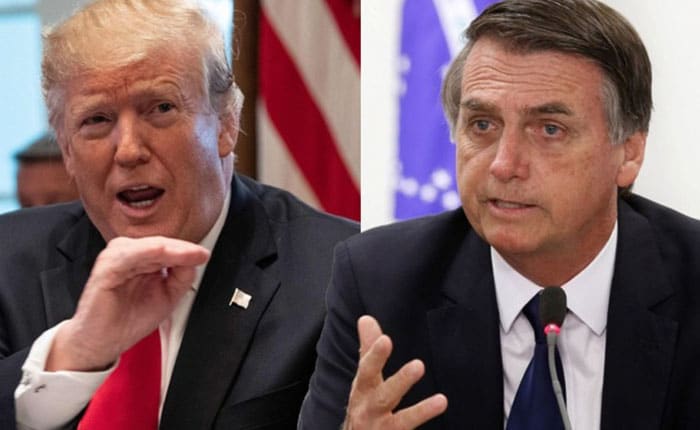 But Bolsonaro adhered to Trump’s style and actions to build his discourse and project his image as the new leader of the extreme right in Brazil. His government and his speech took the tone of attacks in the media – considered his enemies – as well as in the Congress and the Judiciary. He was a denier of science, social movements, democracy and human rights, with an aggressive language,

Bolsonaro was at his high point in his second year of government, until he entered a new crisis, even before Trump’s defeat. But now, without his great mentor and inspirer, as well as his international political reference, what will become of Bolsonaro without Trump?

For Bolsonaro, the defeat of the Trump style of government, one of a few of US presidents who has not been re-elected for a second term, is a very hard blow. His first reaction could be the consolidation of the pragmatism that he has begun to follow, lowering the ideological and fundamentalist tone of his discourse, or making alliances with Congress and the Judicial Power.

But this is not enough, because with the new government in Washington, there will be issues on which the Brazilian government will be under some pressure, especially in foreign relations, the environment and human rights. On the issue of the Amazon, it is already possible to see the well-worn argument in defense of national sovereignty and denouncing the American ambition on the Amazon.

But this will not have much effect. The transfer of the Minister of the Environment, Ricardo Salles, to another sector of the government is already being considered. It is also unlikely that Foreign Minister Ernesto Araujo will remain in office, in addition to the changes in the citizenship ministry, in charge of human rights issues.

The Foreign Minister had assumed, before the US elections that Brazil intended to be a “pariah”. But it is one thing to be a pariah with the United States as a partner and another to be a pariah with isolated governments without any international prestige. It is likely that the Brazilian government will change its external position, including in international organizations and in relations with neighboring countries.

Bolsonaro already said in one of his recent tweets that there is a growing tendency to strengthen the left in Latin America, warning that the phenomenon could reach Brazil. The Brazilian government took a long time, but he finally recognized the new president of Bolivia. It must also lower its tone in relation to Argentina, but not necessarily in relation to Cuba and Venezuela.

RELATED CONTENT: Bolsonaro and his Capitalist Cronies are Killing the Amazon and its Indigenous Peoples

Brazilian Vice President Hamilton Mourão tried to mitigate the effects of the foreseeable deterioration of relations with the United States, arguing that the relations of Bolsonaro and his children with Trump would be personal relations, but that he expects the state-to-state relationship to remain, preserving the fundamental interests of both countries. The recently signed economic agreements between the U.S. and Brazilian governments may be reviewed, as well as other agreements, depending on the concrete attitude that the Biden government will have toward Brazil. Immediately, the reintegration of the United States into multilateral bodies will also put pressure on the Brazilian government’s isolationism in these bodies.

However, the biggest blow to Bolsonaro is realizing that Trumpismo failed as a form of government, and not getting reelected – a fundamental goal of the Brazilian president. It is difficult to know how Bolsonaro will assimilate to these effects. If he is going to look for some random explanation, taken from Trump’s own speech – as if there was fraud in his defeat – as it already appears in one of the Brazilian president’s twits, or if he is going to do it as if nothing happened, in such a way that Trumpismo reacts, it will reveal is in the very heart of Bolsonaro even without Trump.

In any case, since Trumpism shows its limits, from the moment it becomes a government and sees its discourse demystified by reality, Trump’s defeat is very serious for the Brazilian president. The transformation of the elections into a referendum on Trump worked and should be the path followed by the Brazilian opposition to defeat Trumpismo de Bolsonaro here as well.

But, for the moment, in solidarity with his ally, Bolsonaro says he will not recognize Biden’s victory if Trump weak legal options in the Judiciary. And, pathetically, he confessed: “Hope is the last to die”. As the results of the U.S. elections go forward, Bolsonaro’s life without Trump approaches.