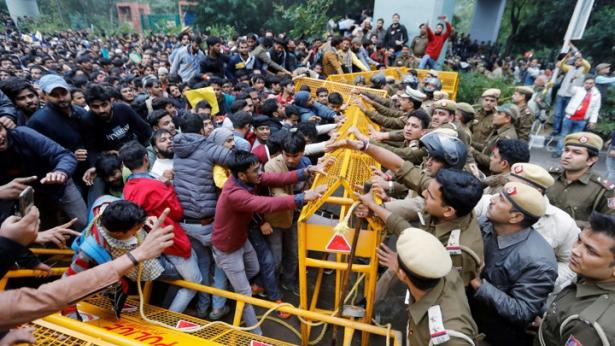 The demonstrations against India’s new citizenship law have had an emotional impact—but can they make a tangible one?

When Narendra Modi was reelected prime minister of India in a landslide victory in May, some wondered what he might do with his new mandate. Half a year later, the answer is: a lot.

He has continued his quest of enhancing Hindu nationalism—including backing the construction of a Hindu temple on a contested holy site where a mosque once stood before it was destroyed by right-wing mobs. He revoked the special autonomous status of Jammu and Kashmir, India’s sole Muslim-majority province, which is also claimed by Pakistan. A state government led by his party published a citizenship registry in northeastern India that effectively rendered nearly 2 million people, many of whom are Muslim, stateless.

Of all the prime minister’s contentious decisions, none has proved more consequential, or prompted more backlash, than his latest. Since the Citizenship Amendment Act was adopted, tens of thousands of people have taken to the streets in multiple cities in protest, posing the first real test to Modi’s leadership since his electoral victory.

At their core, these demonstrations call into question whether a government mandate—even one secured by a substantial margin—translates into unchecked power and public support. But they also highlight a deeper issue about the limits of protest as a force of opposition when legislative channels appear to have run their course.

Since ascending to the premiership, critics charge that Modi has sought to transform India from a secular democracy for all of its citizens into a nationalist and theocratic state that dominates its minorities, including its 200-million-strong Muslim population. Indeed, stoking tensions between Muslims and Hindus has been a feature of Modi’s rise—first as chief minister to his home state of Gujarat (during which time the state suffered deadly sectarian riots), and eventually as prime minister. When his right-wing nationalist Bharatiya Janata Party secured a national election victory in 2014, it was dubbed the “most decisive mandate for any Indian leader” in decades. Five years later, the party won by an even greater margin.

With this new mandate came seismic changes, including Modi’s decision to strip Kashmir of its limited autonomy. Though the international response to the move was mostly muted, large-scale protests within the state quickly ensued, which prompted the government to place Kashmir on lockdown, deploying troops to the area and shutting down the internet (months later, it has yet to be reinstated).

Though this response proved effective in quelling protests in Kashmir, it may prove less so now.

Despite a police crackdown on the demonstrations and the imposition of a curfew, protests continue across India. “They cannot lock down the entire country,” Zoya Hasan, a professor emeritus of political science at Jawaharlal Nehru University, in New Delhi, told me.

What’s happening in India is not unlike the mass protests that have broken out around the world this year. From Hong Kong to Lebanon, people have demonstrated the power of leaderless movements as a tangible force of nonlegislative opposition. In Hong Kong, demonstrators forced the withdrawal of an unpopular extradition bill; in Lebanon, they brought down the government. But whereas those protests involved people pressuring their governments as a deterrent against the passage of unpopular measures, in India something different appears to be taking place: These protesters are staging opposition to legislation that has already passed.

They are also, for the moment, less organized. Though the protesters in India share a common opposition to the new citizenship law, their reasons for rejecting the legislation vary. While some have opposed it on the grounds that it discriminates against Muslims, others have cited the government’s violent crackdowns, particularly against university students, as their impetus to rally. In regions like Assam, the northeastern state in which the citizen registry was published, protesters have voiced their opposition to any immigrants being allowed into the country, regardless of their faith. Since the demonstrations began, at least six people have been killed in clashes with police.

The protests are “an expression of anger,” Champa Patel, the head of the Asia-Pacific Program at the London-based think tank Chatham House, told me. She noted that unlike other protest movements taking place around the world, such as in Hong Kong, the protesters in India aren’t unified by a list of core demands. “Different stakeholders have different motivations.”

Still, this doesn’t mean these protests aren’t having an impact. To the contrary, they have signaled that, despite Modi’s historic government mandate, there are limits to his rule. Put another way: Modi’s power isn’t as unqualified as he might think.

“This government is working on the assumption … that they have a majority and therefore they can do what they are doing,” Hasan said. “It assumes it can use its numerical majority to pursue a majoritarian agenda.”

Yet while Modi may have underestimated the scale of opposition to the new citizenship law, it is still just that: the law. In response to the protests this week, Modi insisted that the law “does not affect any citizen of India of any religion,” attributing concerns to “rumour mongering and falsehoods.” The only way it can be repealed is if it is struck down by India’s Supreme Court (petitions for which will be reviewed next year). Regardless of how the court rules, it’s unlikely to resolve tensions in the short term. “They are notorious for taking an incredibly long time to hear a case and reach a judgement,” Patel said.

If these protests have yet to make a tangible impact on the country’s law, they have at least had an emotional one. “Even if this set of protests around [the citizenship law] calms down … people feel now that they will make their voices heard,” Patel said. “This is an opening the country needed.”