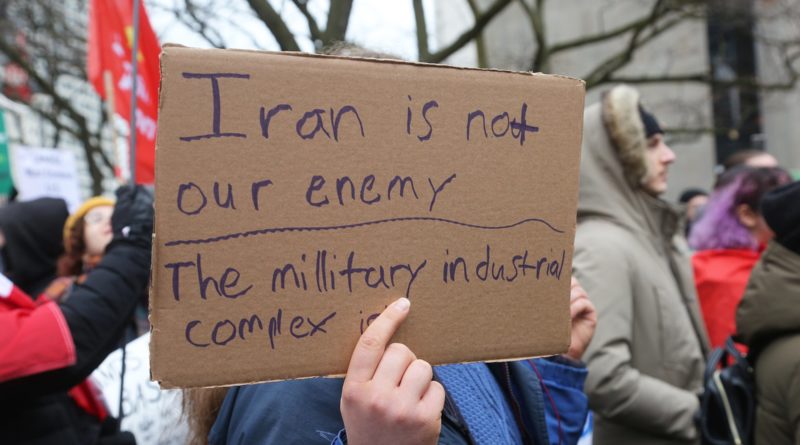 Last night, Iran launched retaliatory missile strikes on U.S. bases in Iraq. Over the past year, even when diplomatic engagement and de-escalation seem to be the obvious choices, the U.S. has continued its spiral toward war with Iran. In the face of these absurd policy and military decisions, more Americans are becoming furious at the inability of the U.S. government to stay out of conflict, and to end unnecessary U.S. violence abroad. We must ask: Who benefits from these endless wars?

The questions raised by the U.S. assassination of Maj. Gen. Qassim Suleimani are not removed from the policy issues that Congress butchered spectacularly late last month, when they sent the National Defense Authorization Act (NDAA) and the 2020 national security funding package to the president for final approval.

These bills funnel over $738 billion to the Pentagon, and fail to end U.S. support to the Saudi-led coalition fighting in Yemen, where U.S. weapons are fueling humanitarian disaster. The bills did not address a dangerous change to arms export laws that will make it easier to sell U.S. weapons abroad. Congress even gave the Pentagon money for 20 more F-35 planes than it had requested.

These bills were passed with bipartisan support from Congress — even though most Americans don’t want increases to the Pentagon budget, and 70 percent think selling weapons to other countries makes us less safe.

RELATED CONTENT: The World Must End the Illegal US Economic War

Wanting to end costly, destructive wars and cut wasteful defense spending is a widely held position. So why is Congress not listening to its constituents, and who is advocating for wasteful spending and bad foreign policy?

In October, Lockheed Martin received an outrageous $34 billion contract for F-35 planes. This windfall came despite consistent concerns from the national security community over the reliability, cost effectiveness and necessity of these planes.

Investment in education instead of defense would create three times as many jobs.

Raytheon, which continues to sell weapons to Saudi Arabia, experienced a 94 percent increase in stock value during the first three years of the war in Yemen. Raytheon’s weapons have killed hundreds of civilians, including children and people attending weddings and funerals — and yet the company continues to hire lobbying firms to represent its own interests in relation to foreign military sales to Congress.

A lobbyist who works for many of these defense contractors, and the countries they sell weapons to, lobbied on behalf of clients for continuing U.S. military support to the Saudi-led coalition operating in Yemen, according to The Hill.

The article notes that “the effort stands in stark contrast to the agenda of most lawmakers” who had serious concerns about the role of this support in contributing to human rights abuses and violence that has killed over 100,000 people.

Despite these concerns, the defense contractors’ interests won out over common sense; neither the NDAA nor the national security appropriations package put restrictions on U.S. arms sales to Saudi Arabia. The defense industry’s investment of over $84 million in lobbying in 2019 clearly paid off. Campaign contributions also play a role — and the leadership of the Appropriations Committee, including Kay Granger and Nita Lowey, make regular appearances on lists of top defense campaign contribution recipients.

Why are these companies actively lobbying for bad policy? It’s good for business. These conflicts have enabled defense contractors to line their pockets with billions of taxpayer dollars.

But while these unchecked arms sales and massive Pentagon budgets may be good for the military-industrial complex, they are not good for the economy, our communities or the world at large.

The outsized Pentagon budget hurts our communities by diverting resources from education and health care — sectors that build and strengthen communities. As over 100 faith leaders and organizations said in a recent open letter, “It is immoral to spend excessively on the weapons and conduct of war, especially at the cost of food for the hungry, healthcare for the sick, education for our children, and prevention of and recovery from violent conflict.”

Investment in these sectors has also been shown to be better for the domestic economy. The Cost of War Project estimates that investment in education instead of defense would create three times as many jobs.

And it is not just our communities that we should be thinking about. Our unchecked military spending has huge impacts on the global community. The financial incentive to buy, use and sell weapons contributes to massive human suffering around the globe — and yet the arms industry continues to lobby for wasteful spending and bad foreign policy as long as it increases profits.

It’s time the U.S. public stands up to corporate interests by demanding that Congress cut the Pentagon budget and start making foreign policy choices centered on the wellbeing of the global community, not arms trade profits. The Poor People’s Campaign has proposed $350 million in specific budget cuts in their Moral Budget that includes closing foreign bases and ending wars, which would be a huge step toward divesting from the war industry.

The influence of these unscrupulous defense contractors in military and foreign policy is harming necessary development at home and making the world less safe.