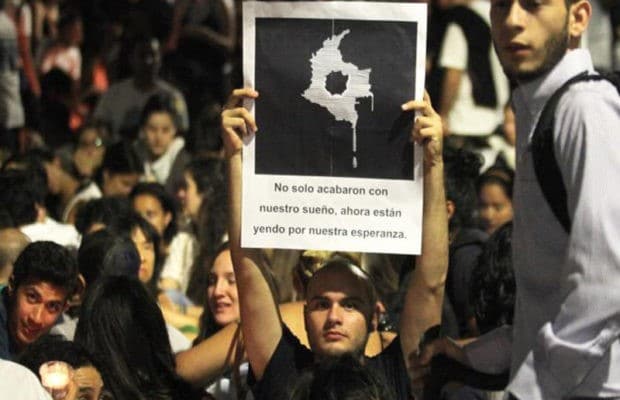 On the night of Wednesday, January 8, social leader Oscar Quintero Valencia was taken from his home and executed in front of his wife. He lived in the village of Los Mangos in Puerto Guzmán (Putumayo), the municipality where social leader Gloria Ocampo had been murdered the previous day, along with her neighbor Heladio Moreno.

Oscar was a native of Santander de Quilichao (Cauca), where former FARC-EP combatant Viyarmil Serna Andrade, 35, was seriously wounded after being shot three times. At the same time, another murder was recorded in the village of Caño Sábalo, also in the rural area of that town on the border with Puerto Caicedo. The victim was identified as Gentil Hernández Jiménez.

Human rights defender Wilmer Antonio Miranda, resident of the village of La Independencia, municipality of Cajibio, (Cauca), was murdered on January 4. He was part of the Social and Political Coordination of the Patriotic March in Cauca.

According to the Human Rights Network, “Francisco Isaías Cifuentes” and the National Network of Guarantees and Political and Social Coordination of Patriótic March, Jesús Adier Perafán was also murdered in Caicedonia, (Valle) and Gilberto Valencia, in the municipality of Suárez, (Cauca), on 1 January.

“The murder of Gloria Ocampo in Putumayo must be understood in its true meaning: Since the beginning of the Duque government, the paramilitaries have been resurrected, wreaking havoc in the former areas of influence of the FARC and are now new epicenters of drug trafficking.”

The movement,Lets Defend Peace, demanded that Duque respect the mandate of the National Commission for Security Guarantees, in view of the repeated acts of violence against social leadership throughout the national territory, especially in territories such as Cauca, Chocó and Putumayo.

Despite the fact that in May 2019 the Duque/Uribe regime convened the National Table of Guarantees, it rejected the proposal to create a public policy for the dismantling of criminal organizations provided for in the Peace Agreement.

Lets Defend Peace has indicated that the next meeting of the National Commission of Guarantees “must begin the route of construction of public policy, as established in the Peace Agreement, without further delay”.

According to the latest report from “We are Defenders”, from January to November 2019, murders of women who are human rights defenders increased by 44% compared to 2018.

The regions with the greatest militarization are those where the greatest number of leaders are killed by “dark forces”, and in this bloody context the US government gave a “Certification” to the Uribe government and the deputy president Duque in 2019, for supposedly being “respectful of human rights”.

Meanwhile, Almagro at the OAS and Bachelet at the UN human rights office remain complicit in the terror in Colombia, since their main activity is to attack the legitimate government of Venezuela, serving the interests of US imperialism.