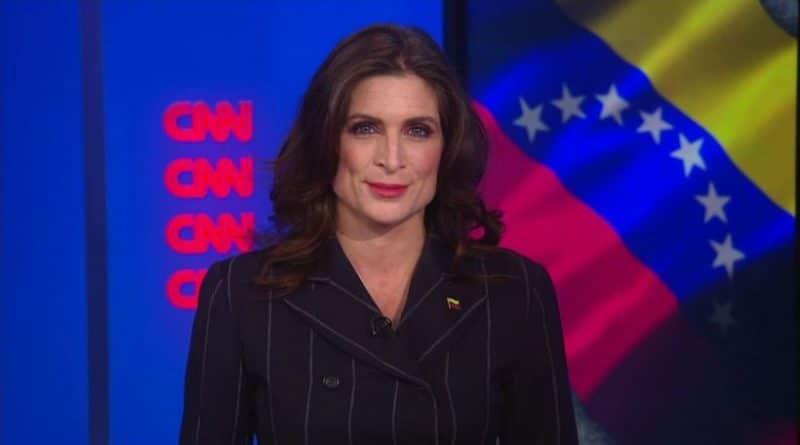 At the beginning of the telephone conversation, Neumann informs Avendaño that she has worked together with Isadora de Zubillaga, “special envoy” of Guaidó in France, around the (need) of growing the international support for the Popular Will militant. Given this, Neumann points out that the “Foreign & Commonwealth Office” (the British Foreign Ministry) will not support them if they support the official line of talking about the “Essequibo of Guyana”.

Once again, the Esequibo controversy is on the table; As they have done with the appropriation of CITGO and other assets of the Republic, it is not surprising that this time the Esequibo territory, rich in mineral and energy resources, is part of the strategic plan to undermine the Venezuelan State.

WHO IS VANESSA NEUMANN?
Vanessa’s grandfather, Hans Neumann, a Jew from the extinct Czechoslovakia, was Chairman of the Board of Directors of the Montana Industries Corporation (Corimon). He also underpinned journalistic projects in Venezuela such as The Daily Journal and the Diario Tal Cual with Teodoro Petkoff.

The Neumann family founded the Neumann Design Institute and the Institute of Higher Administration Studies ( IESA ), and in turn, participated in the founding of the Museum of Contemporary Art with Sofía Ímber in Caracas (in Pre-Chavez Venezuela).

As for Vanessa, according to her profile on LinkedIn , she obtained the PhD in Philosophy at Columbia University. And she describes that in the 90’s she worked at his grandfather’s company (Corimon) when his shares were offered on the New York Stock Exchange.

The Venezuelan, also a US citizen, founded Asymmetrica in 2010, a consulting firm that conducts research on government affairs to “counter” illicit finances. This “initiative” complements that with its advice to the US Department of State and Department of Defense.

She is the author of the book Blood Profits, in which she recounts “how American consumers unconsciously finance terrorists.” In this “work”, Neumann describes her marriage to William Cash, son of the British parliamentarian of the Conservative Party, Sir Bill Cash.

In addition, in the book she tries to explain, how terrorist cells operate in the world and, apart from that, her disagreement with the policies of President Hugo Chávez is made evident.

NEUMANN AND THE ANTI-VENEZUELAN LOBBY
Last March, Vanessa Neumann received the call from Leopoldo López, an old friend of her family, in which she was offered the position of “special envoy” of Guaidó for the United Kingdom. Immediately, Neumann focused her efforts on taking possession of one of the buildings of the Venezuelan embassy in London.

A month later, Neumann in an interview with the journalist Mehdi Hasan , from Al Jazeera, tried to ignore the history of US military interventions in Latin America, by joking and expressing empty concern, that she was “too young” to have lived such “incidents.”

“Why on earth would you trust a US military let alone Donald Trump?”@mehdirhasan talks to Juan Guaido’s representative to the UK Vanessa Neumann https://t.co/a8XNjYTrFI [via @AJUpfront] pic.twitter.com/UuDZKO33sz

With medium and long-term maneuvers, the Anglo-Venezuelan has been one of the main operators in the lobby to illegally hijack the 1.2 billion dollars in Venezuelan gold reserves at the hands of the Bank of England.

Recently, for NTN24 she gave statements where she alleged that “thanks to her work” since last April and for her monthly meetings with British deputies, she has machined the lobby to show Venezuela as a supposed regional danger for the United Kingdom. Another breeding ground necessary to develop the ideal scenario for a possible military intervention in the Venezuelan territory.

The controversy with the Essequibo territory is well known, which has as its framework the understanding of the Geneva Agreement of 1966. It is an issue that goes deep into the interests of energy companies and powers such as Britain.

ExxonMobil, since 2015, has begun exploration work in the area of international litigation between Venezuela and the Cooperative Republic of Guyana, specifically in the Stabroek block, precipitating complains from Venezuela.

It is not far from reality to think that, for Neumann lobbying operations, the Esequibo issue is a card on the table. Even more with a corporation with high economic and energy interests such as ExxonMobil.

With barely fluent Spanish, Neumann is part of the pseudo-ambassadors of Guaidó that put into evidence and public light the ignorance and lack of roots in Venezuelan history, culture and context, demonstrating that the most Venezuelan thing that she has is her place of birth.