It is curious that the three American countries that are suffering harsh economic sanctions from the United States are doing much better than the others in their fight against covid-19. One thing is certain: the pandemic has highlighted the crisis of the neoliberal and capitalist model.

Actual number of deaths from covid
As in Europe, the coronavirus crisis has hit the American continent hard. Its ratio of deaths due to covid per number of inhabitants is six times higher than in the rest of the world. However, there are three countries that stand out above the rest for their positive response to the pandemic: Nicaragua, Cuba and Venezuela, which are well above the rest of the American nations.

To ascertain the number of deaths from covid we did not use the figures issued by national authorities, which sometimes underestimate the real number. Instead, we used a large study conducted by the Institute for Metrics and Health Evaluation (IMHE) at the University of Washington. 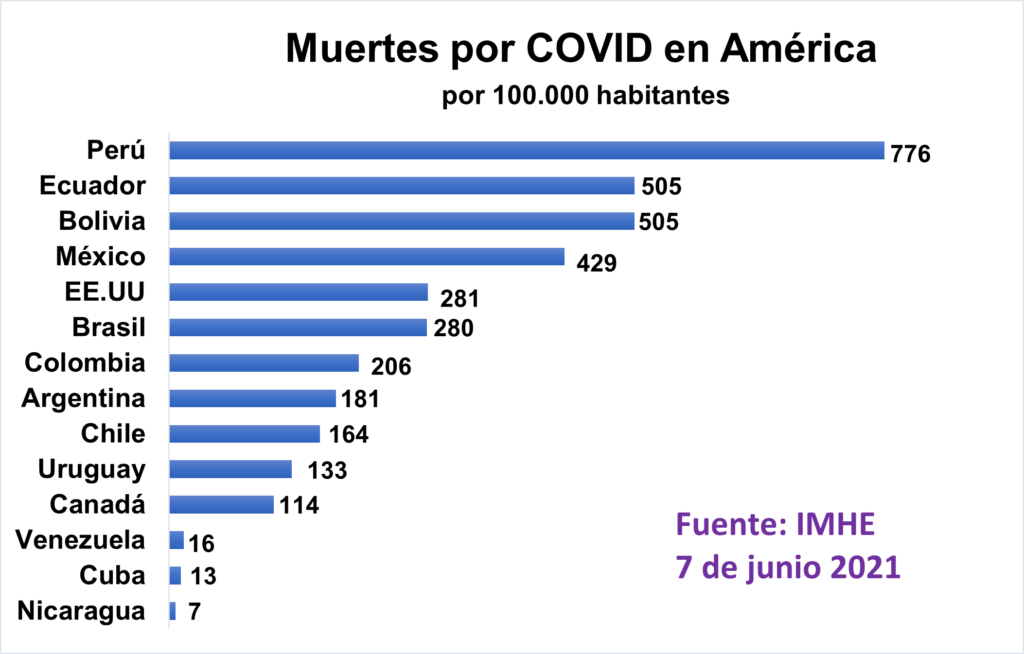 Thus we obtain the number of deaths directly caused by covid-19. In the Americas, the differences between countries are striking. The graph shown leaves little room for imagination.

There are at least three reasons why Nicaragua, Cuba and Venezuela do so well: their rapid and decisive response, a well-organized health system and the mobilization of the population.

Rapid and decisive response
The response of many countries has been too lax or too late. Both Trump and Bolsonaro downplayed the severity of the pandemic by calling it a “gripecita” by joking about it. Both presidents even opposed prevention measures such as masks. In recent months Chile has relaxed security measures too soon, with the result that the country is suffering from a fourth wave.

The reason for opting for these lax actions has been to guarantee the privileges of the economic elite. In order to ensure profits, security measures such as closing establishments, social distance and mandatory use of masks have been as minimal as possible. This has been the case, for example, in Guatemala, but also in Brazil and the United States.

A very different situation has been experienced in Nicaragua. This country has focused on the care of the population and not on the benefits of the economic elite. As early as the end of January, when most Western countries were still ruling out the likelihood of a pandemic, Nicaragua prepared wards to receive covid patients in about 20 hospitals, set up health checks at entry points and introduced mandatory quarantine. It also initiated a program to combat misinformation circulating on social networks.

Nine days after the first cases were identified in Cuba, the authorities decreed the closure of the country. The same happened in Venezuela.

RELATED CONTENT: Nicaragua, Among the 10 Safest Countries in the World to Visit Despite COVID-19

A well-organized health system
In most American countries, including the U.S., forty years of liberal government have been a disaster for healthcare systems. Most of the population cannot afford health care, and it has deteriorated sharply. These inadequate and inaccessible health services are a major cause of the high number of deaths from covid in the continent.

This picture contrasts sharply with the situation in Cuba, Venezuela and Nicaragua, countries that devote a large part of their budgets to public health care, which is free or very cheap. In all three countries, preventive medicine is an essential part of healthcare. In times of pandemics, this feature is crucial.

Mobilizing the population
A pandemic is a many-headed monster and defeating it requires the support of the population. Quarantine and other security measures only work if people are willing to respect them.

Cuba has a solid social fabric that is well lubricated by hurricane contingency plans and combines all the forces of the community: teams of family doctors-nurses, schools, workplaces, neighborhood committees and mass organizations. This network has been in full mobilization during the coronavirus crisis.

Both Venezuela and Nicaragua have deployed thousands of brigades to fight the pandemic locally in a decentralized manner. In this way it has been possible to reach the entire population.

Since the beginning of the crisis, all three countries launched awareness campaigns through social networks and traditional media to adequately inform the population and warn them of the false news circulating in relation to covid.

Breakdown of the neoliberal and capitalist model
Cuba, Venezuela and Nicaragua opt for a socialist model, for which they face strong economic sanctions from the United States. Despite the harshness of these sanctions, their health results are far superior to those of the rest of the continent.

The pandemic has highlighted the crisis of the neoliberal and capitalist model, a model that gives more importance to economic profits than to people. Forty years of austerity policies have eroded health care, and the model is incapable of mobilizing the population when necessary. The time has come to overcome this model.

Socialism or death, we will prevail!