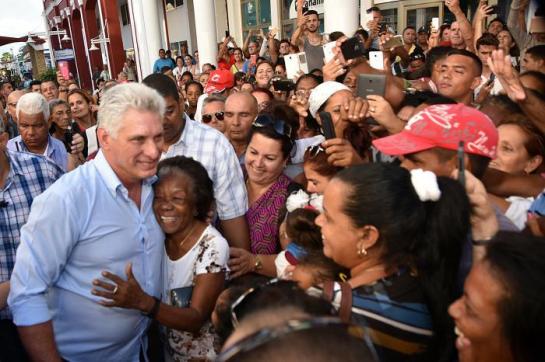 A Brazilian friend who, as a journalist, spent a few days in Cuba, told me her amazement about how all the Cubans with whom she spoke know who Bolsonaro is, who Dilma is and who Lula is, which did not happen to him in other Latin American countries that had recently visited. The exceptional interest with which Cubans follow international events is something very particular that often goes unnoticed by those of us who live on the island. The social outbursts in Haiti, Chile, Panama and Ecuador, the conflict of powers in Peru, the endless repressions and murders of social leaders in Honduras and Colombia, the inherited ungovernability that forced the Government of Mexico to release a drug trafficker, the unjust imprisonment suffered by the leader of the Brazilian left to prevent his sure electoral victory and the elections in Bolivia and the United States, or the constant aggression of Washington against Venezuela, can be topics of conversation anywhere in Cuba, from a corner where dominoes are played to a university classroom.

Of course, these conversations do not evade the serious difficulties that the Cuban economy is going through, against which new sanctions from the United States Government are announced every week, nor any of the deficiencies in the services with which citizens collide, in which the impact of the economic blockade can be mixed with bureaucratic laziness and cause discomfort and dissatisfaction.

However, this mixture of economic warfare with internal insufficiencies does not provoke social outbreaks, and when the system – single party socialism – has been put to the test of the ballot box, as in the recent constitutional referendum, despite the intense propaganda to which each year the United States allocates tens of millions of dollars and a well-funded “Cuba Internet Task Force”

The explanation of the dominant media machine is that the mixture of the “intense repression of the regime” and the “Cuban lax” prevents an outbreak. But in the history of Cuba – from Weyler’s reconcentration to the Batista dictatorship, passing through that of Machado – no regime based on repression managed to remain at the head of the country for a long time, despite a “relaxation” in which corruption was the dynamic of politics and the economy at all levels.

On the contrary, if instead of February 2019, the electoral consultation were held now, in the midst of an intensified blockade, the percentage of approval would probably exceed that obtained then, and that would undoubtedly be the result of the combination of three factors conjunctural and two structural.

No Latin American country, of those that right now repress social protest with gunshots and / or openly violates the rules of formal democracy that they themselves defend, has been subjected to economic warfare, to multimillion-dollar financing to create an artificial opposition and , much less, the permanent global media and academic lynching of its leaders and its political and social project.

But despite all that, it must be recognized that there are dissatisfied people in Cuba, and many of those dissatisfied go to Miami. The accumulation of almost six decades of migratory privileges, together with the development of educational capacities and the state of health promoted by Cuban socialism, make them very competitive with respect to the rest of the non-native communities, but they do not make them freer.

More than a million Cubans in the US suffer severe limitations to relate to their families in Cuba thanks to Trump’s measures, however, there is no news that this provokes significant protests there. Nor do we read anywhere that this public absence of disagreement is attributed to corruption and repressive practices, not democratic, that the ruling class on the island until 1959 seems to have implanted in Miami during its already long stay in that city, without disdaining the edifying example offered by a system that today puts Donald Trump and Joe Biden in competition with corruption and insults.