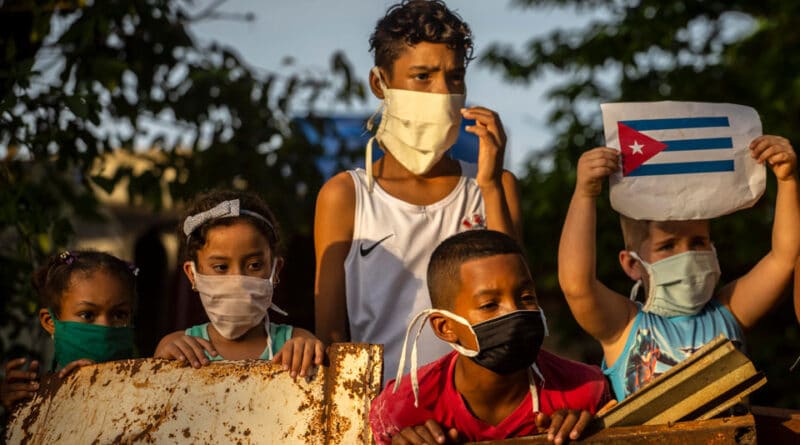 Buffeted for six decades by the U.S. economic blockade and recently having had to cope with restrictions on daily life and work due to COVID- 19, Cuba’s already shaky economy is deteriorating. Government leaders recently outlined remedial steps leading to what they call a “new normal.”

The U.N.’s Economic Commission for Latin America and the Caribbean (CEPAL) reported in October that the region “is experiencing its worst economic crisis in a century” and that Cuba’s GDP this year will be down at least 8%. Tourist income, remittances, foreign trade, and tax collections have fallen. Oil and gasoline shortages, the result of U.S. sanctions against Cuba and Venezuela, have stressed the economy.

Public spending on health care, unemployment compensation, and pensions are up; 150,000 state workers and 250,000 private-sector workers have been idled. Effects of the U.S economic blockade compound matters, with restrictions affecting the tourist industry, foreign imports, and access to foreign currency and loans.

Responding to the pandemic, Cuban officials early on excluded foreign visitors (tourism resumed in July) and instituted vigorous contact tracing, strict isolation of the infected and their contacts, and hospitalization for people infected with COVID-19 who have symptoms. For eight months, officials, led by Cuba’s president, have provided the public with daily updates on the pandemic. Vaccines and treatment products are being developed. Health workers have treated pandemic victims in 39 other countries.

Cuban leaders appearing on national television in October outlined plans for managing the multi-faceted crisis. Summarizing, Alejandro Gil Fernández, Minister of Economy and Planning, pointed out that “We’ve never had this dilemma between health and the economy. Obviously the restrictive measures we’ve adopted…have had an economic impact, but there’s no room for doubt that health comes first.”

The officials reported that the intensity of viral transmission was down, that fewer new cases were being diagnosed, and that more COVID-19 patients were leaving hospitals than being admitted. Outbreaks have cropped up recently in Havana, Ciego de Avila, Pinar del Río, and Sancti Spíritus provinces, while no new cases have appeared in Cuba’s 11 other provinces.

President Miguel Díaz-Canel on Oct. 8 discussed on television with Cubans the government’s plan to expand economic and social activities, partially ease isolation and social distancing—especially in provinces where the virus is quiescent—and “strengthen prevention and treatment protocols.” He referred to “a new normality with a minimum of risk.”

Prime Minister Manuel Marrero Cruz the next day presented elaborate protocols aimed at securing a safe transition. Efforts to prevent spread of the virus transmission would proceed together with “mitigation of both the social and economic impact of COVID-19 and the [U.S.] blockade.” New cases would trigger local measures for limiting further infection while activities of daily life would continue with little alteration.

Stages and phases of the pandemic’s evolution figure into how the intensity and reach of preventative measures are determined. Local authorities will participate in decision-making. Under new isolation protocols, infected persons with only minor symptoms will be monitored in the community and no longer in hospitals. The seriously ill will enter specially designated hospitals, allowing other hospitals to be able to resume full care of illnesses other than COVID-19.

Cubans are being asked to take personal responsibility for preventing infection. Many will continue working at home via computer or telephone. Students have been attending school throughout Cuba since September, except in Havana, where schools open on Nov. 2, and except for temporary closings elsewhere due to local clusters of infection.

The impression here is that, without question, explanations provided by multiple officials and the protocols presented by Prime Minister Marrero Cruz testify to a process of planning and analysis marked by rigor, comprehensiveness, and respect for human life.

Economic reform amidst pandemic and blockade

For more than 10 years, the government has been working to transform Cuba’s economy. Land-tenure arrangements changed in 2008. The Communist Party’s “Economic, Political, and Social Guidelines,” approved by the Party’s Sixth Congress in 2011, established the framework for change that has been evolving since. The current crisis is a jolt demanding recalibration.

Steps along the way are many. Newly efficient “productive chains” will extend from raw materials to processing and manufacture to sales. They will involve state and non-state enterprises and affect both foreign and domestic trade. State businesses will receive incentives for good management. State-owned agricultural marketing enterprises will receive new support.

Cubans will lose subsidies but some goods and services will be available cost-free. Consumers will have access to more Cuban-produced goods and fewer imported items. Export sales are prioritized. Monetary reform will entail price regulation, currency devaluation, elevated wholesale prices, savings and salary uncertainties, and risk of inflation.

“[E]limination of the dual currency and exchange rate … constitutes the process that is most decisive to the updating of the Cuban economic model.” That was former President Raúl Castro speaking in 2017. Now that change process, anticipated for many years, is in the hands of “14 working subgroups.”

Cuba’s two currencies are the “Cubano peso nacional” (CUP) and the “peso convertible Cubano” (CUC), which is set for elimination. As regards institutions, businesses, and wholesalers, the two are assigned the same value—one U.S. dollar. In retail situations or in transactions among individuals, one CUC is also valued at one U.S. dollar, but in those settings, it’s worth 25 CUPs.

To illustrate the problem: a Cuban milk producer selling directly to Cubans receives 4.50 CUP ($4.50) per liter, which equals 450 centavos per liter. But milk produced abroad and sold to a Cuban purchaser yields $3,000 (or 3,000 CUC) per ton. To cover that cost, the selling price to Cuban consumers need only be 30 centavos per liter. Pity the plight of the Cuban dairy farmer.

There is good news. The Paris Club is a group of European and U.S bank officials who try to ease poor countries’ difficulties with debt-repayment. On Oct. 15, they agreed to suspend Cuba’s obligation to make a payment by Nov. 1 on debt worth $5.2 billion. How long the delay will last is unknown.

Speaking to the Cuban people on Oct. 8, Díaz-Canel pointed out that, “Our socialism excludes the political maneuver of applying shock therapy to the workers. Here, therefore, no one is going to be left helpless. It’s preordained that if someone ends up in a vulnerable situation with the reorganization project, he or she will be helped and supported. We are responsible and promise that the fundamental conquests of the Revolution such as health and free education will be preserved.”

Featured image: Children await the arrival home of the first Cuban medical brigade of the Henry Reeve Contingent in Havana, Cuba, June 8, 2020. The Cuban doctors had arrived in Italy on March 22 to help with the COVID-19 emergency in the Lombardy region. | Ramon Espinosa / AP