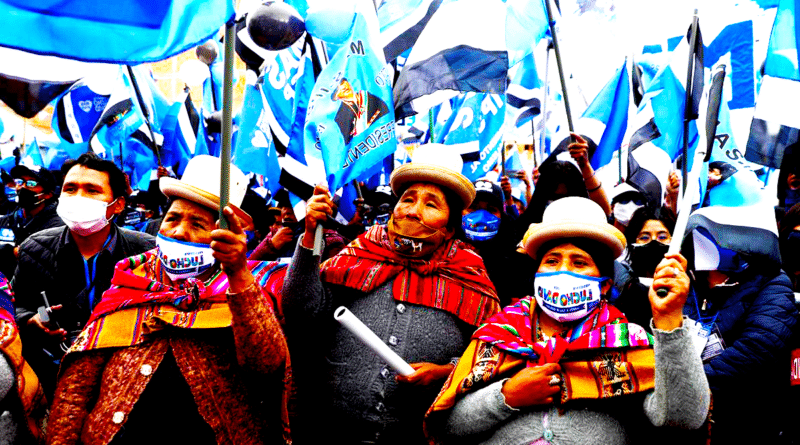 It’s been almost a year since Bolivian President Evo Morales was forced to leave office by the Bolivian military following the release of election results. Jeanine Áñez and her coterie of supporters, who fit somewhere on the political spectrum between right-wing conservatism and Christian fascism, usurped the presidency in November 2019, promising to stage elections as soon as possible. After numerous delays caused by the pandemic, and months of maneuvering by political parties, we’re essentially back where we were in October 2019: Evo’s Movement Toward Socialism party, MAS-IPSP, now led by Luis Arce, is poised to easily win the election.

In the meantime, Áñez was quick to reverse Bolivia’s stance on international issues integral to the strengthening of Latin America, and quick to reverse the benefits to Bolivians accrued from the nationalization of public resources and the social programs prioritized by MAS-IPSP. Bolivia quickly pulled out of ALBA (the Bolivarian Alternative for the Americas) and UNASUR (the Union of South American Nations), expelled hundreds of Cuban doctors from the country, recognized the false presidency of U.S.-backed Juan Guaidó in Venezuela, and joined the Lima Group to work for President Nicolás Maduro’s ouster. Evo’s removal has also been widely condemned as a “lithium coup,” and Bolivia’s former Minister for Hydrocarbons Luis Alberto Sánchez warned even before the coup that opposition candidates would privatize the country’s state gas company, YPFB. While dismantling socialism, the coup government delayed this election for as long as they could, initially scheduling the presidential election “redo” for May 2020, then for September, and finally for Oct. 18, 2020.

The Organization of American States, OAS, ostensibly charged with monitoring elections though based in Washington, D.C., have been heavily criticized for their unfounded allegations of fraud in the 2019 electoral process. Current polls, even those promulgated by right-wing organizations, indicate that MAS-IPSP holds a strong majority similar to that of 2019. It appears that MAS-IPSP will sweep to victory in the first round of elections this week in Bolivia.

If the result is already decided, why is this election so important? It’s critical because socialist leaders and their political parties have been brutally repressed in the region for over almost 200 years, in keeping with the U.S. Monroe Doctrine, the guiding policy that treats Latin America as its backyard. Accordingly, the labor and natural resources of Latin American countries are to be exploited by capital in a manner that benefits U.S. companies and transnationals, stripping nations of their wealth, their sovereignty and their ability to enact social programs that would counter the poverty resulting from this inequitable policy.

Although the political structure of many so-called “democratic” countries (like the U.S.) prevents the rise of socialist parties through the electoral process, there have been numerous instances that have bucked the system. Salvador Allende, of course, was the first, elected as President of Chile in 1970. After Nixon’s famed threat to “make their economy scream,” and with the participation of the military dictatorship of Brazil and the U.S.-led Operation Condor terror campaign, Allende was overthrown and met death, sending a clear warning to other nations should they attempt to follow the electoral path to socialism.

Cuba has stood firm as a formidable exception to U.S. hegemony. Nicaragua — after witnessing an electoral setback in 1990 when the revolutionary Sandinistas relinquished power to Violeta Chamorro of the National Opposition Union — have seen Daniel Ortega’s Sandinistas return to power since, winning elections handily in 2006, 2011 and 2016. They have now joined Cuba as the target of U.S. sanctions intended to cripple their economy. Venezuelans, of course, followed in 1998, when they elected Hugo Chávez to power. As they’ve progressed on their socialist path, they’ve been increasingly attacked by U.S. economic sanctions and coup attempts.

Imperialist “lawfare” dislodged Luiz Inacio “Lula” da Silva in Brazil and Rafael Correa in Ecuador, both of whom were eager to distance themselves from U.S.-led neoliberal plans for South America. Countries friendly to U.S. plans in the region — particularly Chile, Ecuador, Haiti, Colombia, Honduras and Brazil — have been rocked by near-constant protests over the last couple of years. In Colombia, with the weakening of Revolutionary Armed Forces of Colombia, FARC, the government has responded to unrest with waves of massacres.

This week’s election is also a turning point in Latin America because everyone is now aware that socialism represents the legitimate choice of the Bolivian people. Consequently, a further military intervention, such as that of November 2019, will signal a definitive end to U.S. soft coup attempts in the region, and a transition to the terroristic approach of Operation Condor. In fact, Correa warned last week that a second Operation Condor is being planned.

It’s a turning point because the revolutionary movements in Bolivia and Venezuela have been committed to peace as opposed to the armed struggles that were waged successfully in Cuba and Nicaragua. Cuba and Venezuela even played a key role in paving this peaceful path to revolution by their diplomatic activities in the region, negotiating the 2016 Havana ceasefire that demobilized the FARC in Colombia after 50 years of armed insurgency.

Lastly, it’s a turning point because in the year since the coup, the international community has watched as the U.S. empire crumbles before our eyes. Iran and China teamed up to break the criminal U.S. blockade of Venezuela; military campaigns in Syria and Iraq have met defeat; the COVID-19 pandemic has disproportionally ravaged the United States; protests have rocked the country since May; and their own upcoming elections have descended into a quagmire of idiocy. In this sense, the return of democratically-elected socialist governments in Latin America could sound the death knell for U.S. imperialism.