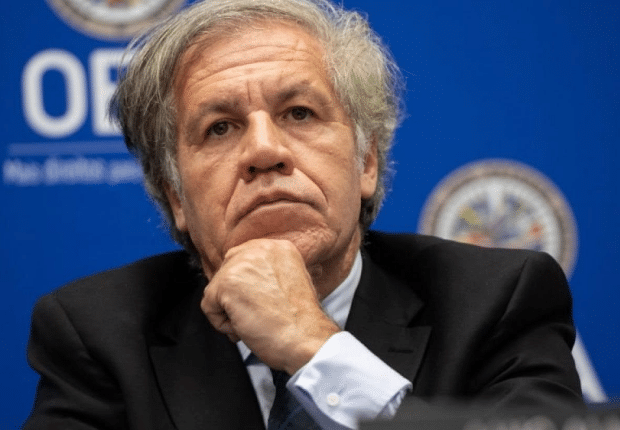 The Organization of American States (OAS) has never been a friend to the peoples of the Americas. This institution, ostensibly a space for multilateralism, has instead always been a tool for the U.S. Department of State. As Fidel Castro said in 1962, it is nothing but the U.S. Ministry of Colonies. That is truer now than ever before under the leadership of Secretary General Luis Almagro, who has been at the helm since March 2015. He is quite possibly the worst leader since the OAS was founded in 1948..

Here are ten reasons Almagro has to go:

1. Almagro and the OAS lit the fuse for the 2019 coup in Bolivia. They falsely claimed the presidential results showing Evo Morales being re-elected were “inexplicable”, which set off unrest and activated a plot that overthrew him. These claims were so thoroughly debunked that members of the U.S. Congress requested an investigation into the OAS’s role in the coup. Almagro immediately recognized the coup government, which committed “summary executions and widespread repression” during its year in power. After saying nothing about the coup regime’s victims, the OAS issued a statement condemning Bolivia’s judicial system the day after coup leader Jeanine Añez was arrested. This blatant interference in the domestic affairs of a member state runs counter to the OAS charter and led Mexico to chastise the OAS for its behavior towards Bolivia.

2. Almagro’s cravenness helped legitimize four more years of the Honduran narco-dictatorship led by Juan Orlando Hernández. The 2017 elections in Honduras were actually riddled with fraud, and initially, Almagro and the OAS did the right thing: they denounced the fraud and called for new elections. But the Trump administration was happy with the results and recognized the elections. Within a month, Almagro backtracked, which “called his own credibility into question” according to diplomat Sir Ronald Sanders. Despite the documented crimes of the Juan Orlando Hernández regime, Almagro embraced and legitimized the Honduran government.

3. Almagro continued the OAS’s long history of interfering in Haiti. In 2020, when President Jovenel Moïse ruled without a parliament and gave himself an extra year on his term, the OAS issued a press release telling Haitians they should “comply.” Almagro, acting without the approval of OAS member states, sent a delegation to Haiti (which was in the country for just five hours) to prop up the Moïse government in the face of intensifying protests. Just before Moïse’s assassination in 2021, the OAS recommended that he appoint a new prime minister and set elections before the end of the year – precisely what the majority of Haitians did not want.

4. Almagro embraced the 2016 coup and the Temer regime in Brazil. Right after a meeting with Brazilian President Dilma Rousseff before her impeachment, Almagro denounced the proceedings against her as politicized and without merit. But once the coup happened, he had nothing to say about it and was quick to accept the Temer regime, visiting his government less than two months after the coup. When wildly popular former President Lula da Silva was arrested in 2018 and barred from upcoming elections, Almagro and the OAS did nothing. This paved the way for right-wing extremist Jair Bolsonaro to win the presidency. Almagro has had little to say about Bolsonaro’s horrible treatment of Indigenous peoples, Afro-Brazilians, peasants and the environment, among others.

5. Almagro ignored human rights abuses by security forces during massive protests in Haiti, Honduras, Ecuador, Colombia and Chile. Almagro visited Ecuador in 2019 to congratulate the government of Lenin Moreno for its handling of protests that left 11 dead, over a thousand injured and hundreds arrested. He would later say that Chilean President Sebastián Piñera “efficiently defended public order” – the same Piñera who declared war on his country’s protesters and whose police forces targeted their eyes. Regarding the protests in Colombia that left at least 80 dead, dozens disappeared and thousands assaulted by police, Almagro limited his criticism to a tweet condemning both the excessive use of force by police and protester violence, drawing a false equivalence between extrajudicial killings and vandalism. Almagro has yet to say anything about the 171 social leaders murdered in Colombia or the 96 massacres the country had in 2021 alone. While ignoring violations in member countries, Almagro and the OAS condemned the Cuban government over the July 2021 protests, despite the fact that Cuba isn’t a member of the OAS.

6. Almagro is waging a hybrid war against Venezuela. Under his watch, the OAS violated its own charter and procedures time and time again to attempt to intervene in Venezuela. He tried to invoke the Inter-American Democratic Charter against Venezuela, a tool meant to be used as a response to coups, not to spur coups. He immediately recognized fake “interim president” Juan Guaidó and accepted his fake diplomats into the OAS, although Venezuela had formally left the organization by then. Almagro also tried to invoke the Rio Treaty, a defense pact that could have opened a path for a regional invasion of Venezuela, and has said “all options” should be considered for overthrowing the Venezuelan government. He told former Spanish President José Luis Zapatero “Don’t be stupid” when Zapatero pushed for a negotiated solution to the crisis in Venezuela.

7. Almagro is also one of the main drivers behind the attempts at regime change in Nicaragua. Almagro and the OAS strongly supported the attempted coup in 2018, in which the U.S. was heavily involved. The violence of the protesters (who killed at least 60 people, including 22 police as well as government officials and supporters) was deliberately ignored to frame a narrative around government human rights abuses and justify intervention. Almagro smeared Nicaragua’s presidential elections as part of a campaign to delegitimize President Daniel Ortega. Just like in Venezuela, he has been a cheerleader for illegal U.S. sanctions meant to cripple the economy.

8. Similar to Trump and Bolsonaro, Almagro lashes out at the media and punishes those who criticize him. In response to questions raised about OAS allegations of fraud in Bolivia’s 2019 elections, Almagro published a bizarre rant that invoked Nazis, attacked scholars and made absurd allegations against the New York Times. He failed to respond to letters sent by members of Congress, demonstrating a total lack of accountability. Almagro denounced two OAS electoral observers as “spies” for disagreeing with his false claims of fraud in the 2019 Bolivia elections. He essentially fired Paulo Abrão, the head of the Inter-American Commission for Human Rights (IACHR), because under Abrão the IACHR denounced the Añez regime’s human rights abuses in Bolivia.

9. Plus, he’s likely corrupt. In 2018, Juan Jiménez Mayor, spokesperson for the Mission to Support the Fight against Corruption and Impunity in Honduras (Maccih), resigned from his post because of lack of institutional support from Almagro and alleged corruption in the anti-corruption campaign. Prosecutor Julio Arbizu also resigned from the commission, claiming that “conversations between Almagro and [President Juan Orlando] Hernández” were about using the Maccih to divert criticism from Hernández. The Mission lined the financially broke OAS’s pockets with millions of dollars in dedicated aid from the U.S. and EU. Arbizu alleges that Almagro had “arbitrary use” of these funds and that he hired two unqualified friends to work at the Maccih, one of whom was openly racist and classist towards Maccih staff. Almagro promised to serve only one term as OAS Secretary General, but his reelection in 2020 prompted an anonymous source to publish a widely-circulated letter that detailed cronyism and conflicts of interest in Almagro’s hires for important OAS positions, as well the deep divisions within the OAS caused by Almagro’s decisions.

10. Almagro apparently has nothing to say about the statue of Queen Isabella in front of the OAS. At a time when governments all over Latin America are taking down statues that pay tribute to perpetrators of genocide, racism and colonialism, Almagro has ignored a July 2021 request from CODEPINK to meet to discuss removing this symbol of the centuries-long holocaust unleashed on the indigenous people of the Americas. He will also likely ignore an upcoming open letter from prominent figures throughout the Americas calling for the statue’s removal.