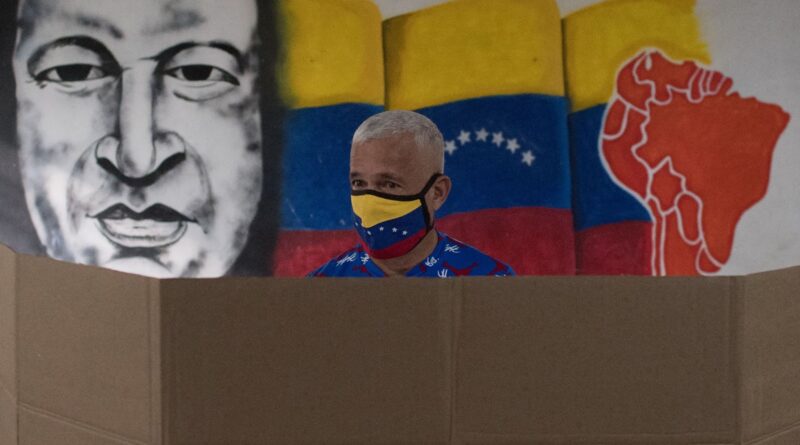 These elections should put the Biden administration on notice that continuing to support the MUD, and in particular, the fiction of Guaidó as “interim president,” is a failed policy.

For the first time in four years, every major opposition party in Venezuela participated in elections. For the fifth time in four years, the left won in a landslide. Voters elected 23 governors, 335 mayors, 253 state legislators and 2,471 municipal councilors. The governing United Socialist Party of Venezuela (PSUV) won at least 19 of 23 governorships (one race remains too close to call) and the Caracas mayoralty in the November 21 “mega-elections.” Of the 335 mayoral races, the vote count has been completed in 322 of them, with PSUV and its coalition taking 205, opposition coalitions 96 and other parties 21. Over 70,000 candidates ran for these 3,082 offices, and 90% of the vote was counted and verified within hours of polls closing. Turnout was 42.2%, eleven points higher than last year’s parliamentary elections.

Here’s why chavismo, the movement behind the Venezuela’s Bolivarian Revolution, won:

1. Good governance in health, housing and food. Venezuela’s health policiesin response to Covid-19 have been exemplary. The expectation in the U.S. was that the coronavirus would overwhelm Venezuela’s healthcare system, which has been devastated by years of sanctions. And yet, per million population, Venezuela registered 15,000 cases and 180 deaths. For the sake of comparison, the figures in the U.S. are 146,000 cases/million and 2,378 deaths/million, Brazil’s are 103,000 and 2854, and Colombia’s are 98,000 and 2,481. Unlike images we saw in Ecuador or Bolivia, there were no bodies of victims left on the streets, nor were there overflowing morgues like in New York.

In terms of housing, the Venezuelan government has built 3.7 million homes for working class families over the past ten years, the majority of which were built and delivered by the Maduro administration while under sanctions.

As deadly as the sanctions have been, things would be significantly worse were it not for Venezuela’s most important social program in the past five years: the CLAPs. These consist of boxes of food and other necessities, some of which are produced locally, which are packaged and distributed by communities themselves. Seven million Venezuelans families receive CLAP boxes every month, out of a country of 30 million people. Not only has this program been instrumental in keeping people fed, it has invigorated the base of chavismo and reconnected the government with grassroots after the PSUV’s defeat in the 2015 legislative elections.

2. The economic situation is improving. According to an August 2021 surveyby opposition pollster Datanálisis, 50% of Venezuelans consider that their lives have improved compared to the previous year or two. Despite sanctions that have caused a 99% drop in government income, the Venezuelan economy is stabilizing. Inflation is down to single digits for the first time in four years. Credit Suisse projected 5.5% growth in 2021 and 4.5% growth in 2022. Oil production hit an 18-month high in October, helped by a trade deal with Iran.

3. The left is united (mostly). The PSUV didn’t win the elections alone, they were united with 8 other left parties in a coalition known as the GPP (Great Patriotic Pole). The PSUV itself held internal primaries in August, the only party to do so. Over half the GPP candidates were women, 52%, while another 43% were youth. Overall, 90% of the candidates hadn’t held office before, suggesting a renewal of the party from the grassroots. However, this marked the second election in a row in which the left wasn’t completely united. A coalition that included Venezuela’s Communist Party ran its own ticket. These parties got less than 3% of the vote in the 2020 parliamentary elections and their decision to run separately appears to have had no impact on the gubernatorial races.

4. The opposition is divided. Never known for their unity, the Venezuelan opposition suffered a major split as a result of some parties opting for boycotting elections and attempting to overthrow the government, while others preferred a democratic path. Despite all the major parties participating in these elections, the opposition was split into two main coalitions, the MUD (Democratic Unity Roundtable) and the Democratic Alliance. The vast majority of the 70,000 candidates are in the opposition and they were running candidates against each other in almost every race. Of the 23 gubernatorial races, six were won by PSUV candidates with less than 50% of the vote and by less than six points – more unity between the MUD and Democratic Alliance could have made the difference.

A count of the votes in the gubernatorial and Caracas mayoral races show the PSUV coalition taking 46% of the total vote, with the rest split between the various oppositions. A united opposition could win in Venezuela, but “united opposition” is an oxymoron.

5. The opposition is deeply unpopular. While much is made about the alleged lack of support for President Maduro (the millions of votes his party got will never be acknowledged by the U.S.), it’s less known that the opposition is deeply unpopular. Here are the disapproval ratings for some of the opposition’s key figures: Juan Guaidó, 83% disapproval; Julio Borges (Guaidó’s “Foreign Minister), 81%; Leopoldo López (Guaidó’s mentor and mastermind of coup attempts), 80%; Henry Ramos Allup (longtime opposition leader), 79%; Henrique Capriles (2012 & 2013 presidential election loser), 77%; and Henri Falcón (2018 presidential election loser), 66%. All of these but Falcón are part of the MUD.

The MUD coalition spent years claiming they represented a majority, a claim which couldn’t be verified by their strategy of electoral boycotts. However, their return to the electoral process only marked a ten point increase in voter turnout compared to 2020. Moreover, the MUD placed below other opposition parties in 9 of 23 states and in Caracas. The MUD only won one of the three governorships taken by the opposition. This might be due in part to widespread rejection of U.S. sanctions. The MUD has repeatedly endorsed deadly sanctions despite the fact that 76% of Venezuelans reject them.

The MUD enjoys the political, financial and logistical support of the United States and the EU, while members of other opposition parties have been denounced and sanctioned by the U.S. for negotiating with the Maduro administration. These elections should put the Biden administration on notice that continuing to support the MUD, and in particular, the fiction of Guaidó as “interim president”, is a failed policy.