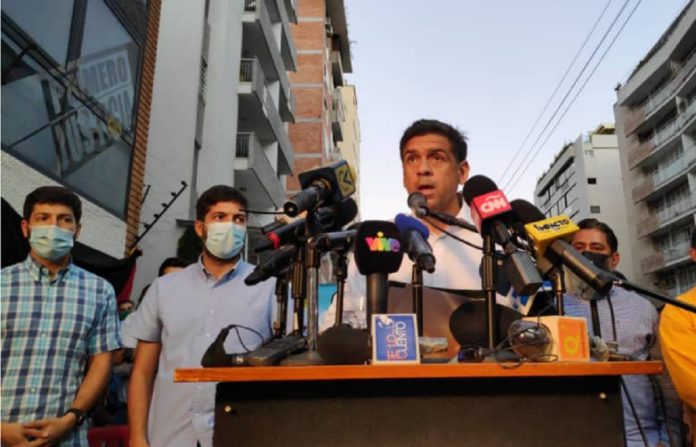 The opposition soap opera performed by the right-wing candidates for governor in the state of Miranda has come to an abrupt end. This Thursday, November 11, the candidate for the Democratic Unity Table (MUD), Carlos Ocariz, resigned his candidacy.

During a press conference, the Justice First (Primero Justicia, PJ) politician reported that in “accordance with his struggle” he decided to quit his candidacy for Miranda state governor and leave any further decisions to the MUD.

“We must put an end to this unfortunate situation and return detachment to politics,” said Ocariz. “You put me first in the polls, today it’s my turn to put you first.”

Ocariz claimed to be “first in the polls” despite the fact that in recent weeks the opposition leader has been the candidate David Uzcátegui. This created a scenario of division that will likely damage MUD’s hopes for victory over the PSUV candidate, Héctor Rodríguez.

In his speech, the former mayor of the Sucre municipality asserted that he is the first candidate to present his resignation to facilitate a united candidacy. Until now, the only party that had applied a similar strategy of united candidacies was the PSUV.

Thursday midnight was the deadline defined by Venezuela’s National Electoral Council (CNE) for candidates to formally resign, and to make readjustments in political alliances. After this deadline resignations are always possible, but parties would not be provided the appropriate facilities for informing voters.

In this regard, Carlos Ocariz expressed his hope that in the closing hours, others would also join the proposal to present united candidates for the opposition.

“Miranda is not going to be lost because of me,” he said. “Hopefully in the next few hours many others will do so. Venezuela demands unity from us and the people demand coherence from us.”

Despite declining his candidacy for the government of Miranda, Ocariz did not call the population to vote for his right-wing rival David Uzcátegui, from the Fuerza Vecinal political party.

The opposition battle for the government of Miranda was marked by months of disputes between Ocariz and Uzcátegui. The two struggled to define who was going to be the candidate for the regional and municipal elections on November 21.

In this new scenario, analysts agree that there are two relevant outcomes. First, this announcement will increase the desire of right-wing voters to participate in the elections. Secondly, it places additional pressure on the favored candidate, PSUV’s Hector Rodriguez.