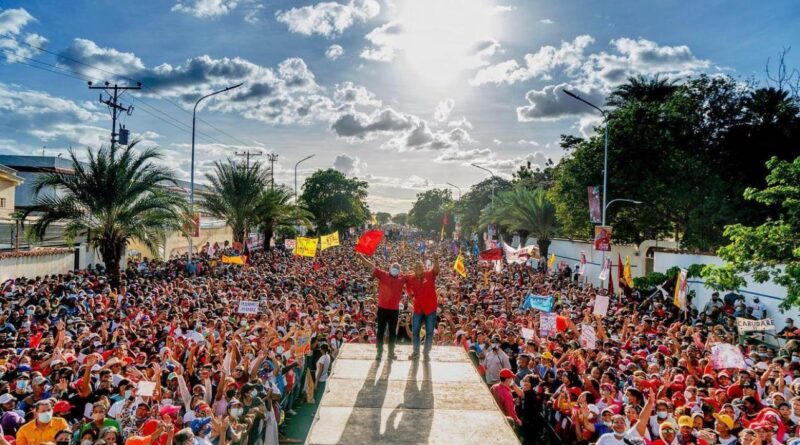 In the midst of a process of economic recovery following the blows inflicted by the United States and the European Union’s criminal blockade, Venezuelan political parties complied with the close of the electoral campaign, and citizens prepared to participate in the regional and municipal mega-elections to be held on Sunday, November 21.

With multiple political rallies throughout the national territory, the revolutionary forces and all the opposition currents participated in the closing of their respective campaigns.

On this subject, the Samuel Robinson Institute for Original Thought, a research and analysis center established in Caracas in 2020, published an analysis in which it evaluated the elections as a show of force that is projected in the Mexico Talks negotiations, currently interrupted.

However, the analysis also defined the elections “as an opportunity to consolidate the social expectations of economic recovery within the ideology of the Bolivarian Revolution.”

In addition, the analysis concludes that after the 2018 presidential elections and the 2020 parliamentary elections, this Sunday’s mega-elections complete the constitutional cycle and reinforce the country’s institutional stability.

New electoral landscape
Similarly, when evaluating the current scenario, the Robinson Institute states that the multiple opposition candidates, regardless of the final results, are determining the outline of a new political and electoral landscape—a multi-centric and diversified space which takes shape in the empty spaces left by the failures of the G4 coalition.

“The scope of these transformations of the party system remains to be seen,” the Samuel Robinson Institute wrote. “However, the monopoly of figureheads and benchmarks revolving around the G4 seems to be a thing of the past as new political actors, formerly peripheral to the MUD (G4), gain prominence.”

The piece also commented on what is at stake in the international arena, at a time when the government of President Nicolás Maduro has strengthened its presence in multilateral forums, thereby containing and defeating the hostile strategies promoted from Washington, Brussels, and Bogotá.

The Institute also added that “the electoral observation missions in Venezuelan territory mean progress in this regard, and a trend of political normalization in the face of international public opinion, whose weight is significant in the battle of the Venezuelan state for the abolition of sanctions.”

Weakness of right-wing elements?
Other aspects that the work of the Samuel Robinson Institute takes into account are the changes in the political and economic terrain that Venezuela has experienced so far in 2021. In addition, they point out that the failed “Guaidó project” promoted by the White House ended up eroding the political landscape. This, added to the internal divisions of the right, opened the way to new currents within the opposition.

For this reason, the publication asserts that the mega-elections “are the point of arrival for an accumulated political resistance, in whose development Chavismo has kept the Constitution standing as a framework for collective coexistence.”

Recently, the head of state Nicolás Maduro denounced the interventionist intentions of the United States government. In addition, the president repudiated “insolent” statements by the US State Department that questioned the November 21 election process.

For his part, the president of Venezuela’s National Electoral Council (CNE), Pedro Calzadilla, stated that although the electoral authority has certain issues that can be improved, “we are very happy with what we have and we want you to see it, to perceive it.”

Likewise, Calzadilla highlighted the importance of the electoral ban that applies on Friday and Saturday. During this period, all types of political campaigning activity must be suspended in preparation for voting day on Sunday, November 21.