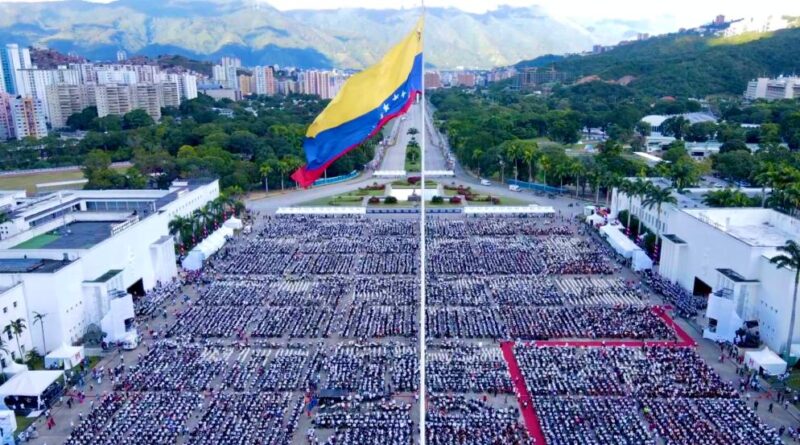 Caracas, November 13, 2021 (special for OrinocoTribune.com)—This Saturday, November 13, the courtyard of the military academy of Venezuela in Caracas was the setting for more than 12,000 young musicians from the Venezuelan orchestra system, internationally known as El Sistema, to come together from more than 400 El Sistema nodes from all over Venezuela, to try for the Guinness World Record as “The Largest Orchestra in the World.”

The official ceremony began with the words of Vice President Delcy Rodríguez, who highlighted the perseverance and dedication of the musicians and the faculty of El Sistema as well as the legacy of Maestro José Antonio Abreu, its founder. “They are challenging difficulties in every corner of the national territory,” Rodriguez said.

“This orchestra is the orchestra of Venezuelans who once again speak to the world with glory, with the virtuosity our father Liberator [Simón Bolívar] projected towards the future,” said Rodriguez.

“There are no bad words about our country,” she added. “When we look at our roots, we know what we are made of, and today we also know that with the power of Venezuela, the music of Venezuela, the future is reserved for us.”

Playing the Marche Slave in B flat minor, Opus 13 by Pyotr Ilyich Tchaikovsky, also known as the Serbo-Russian March or Slavic March, the 12,098 Venezuelan musicians, members of the National Youth and Children’s System of Choirs and Orchestras of Venezuela (El Sistema), registered the attempt to obtain the Guinness Record for the World’s Largest Orchestra. The final verdict will be announced by the organization in the next 10 days.

Once a five-minute duration of the musical pieces has been executed, according to the parameters stipulated by the Guinness Record organization, more than 300 independent observers issue reports that will be evaluated in the coming days, before the final verdict to recognize the record is issued.

In addition to the Marche Slave, works such as “Alma llanera,” “The Merengue of the First Finger,” “Venezuela,” “Chamambo” and the Venezuelan National Anthem were added to the repertoire, but these pieces will not evaluated for world-record purposes.

The events of April 7, 2018, paved the way for this record-breaking concert. On that occasion, 10,701 young musicians belonging to El Sistema gathered at the Poliedro de Caracas in a farewell tribute to José Antonio Abreu, who had passed away on March 24 of that year. The current Guinness Record for the largest orchestra in the world has been held since September 1, 2019, when a group of 8,097 Russian musicians performed the national anthem of that country in Saint Petersburg, Russia.

The music education program El Sistema, founded by Maestro Abreu 45 years ago, currently counts more than one million young musicians from all over Venezuela’s territory learning music for free. El Sistema has become a recognized institution that serves and provides opportunities to children and young people from the entire social strata, and has been recognized worldwide as a beacon of quality and excellence.

It was only with the arrival of Hugo Chávez to Venezuela’s presidency that El Sistema achieved the international mass scope that it currently has. With a great investments of public resources to strengthen cultural values, not just through classical music, but also incorporating local folklore, dance, and countless other Venezuelan cultural expressions. For this reason, alongside Maestro Abreu, President Chávez is also recognized as one of the builders of El Sistema.

This world record feat, in addition to contesting the Saint Petersburg Symphony Orchestra (Russia) record, seeks international recognition for Venezuela’s work in cultural development and education, which has been maintained and even deepened despite the harsh economic blockade by the United States and European governments, in the midst of the COVID-19 pandemic.

Beyond the world record attempt, those interviewed by local media after the concert praised the amazing performance and the monumental effort by the young Venezuelans performing with El Sistema, and were thankful for their attendance at an unprecedented concert, a historical milestone for Venezuelan culture made possible by the combined efforts of El Sistema and Nicolás Maduro’s administration.

Featured image: Aerial view of the Caracas Military Academy, where more than 12,000 young musicians from El Sistema attempted to break a Guinness World Record for “Largest Orchestra in the World”. Photo by Twitter/@FreddyBernal.