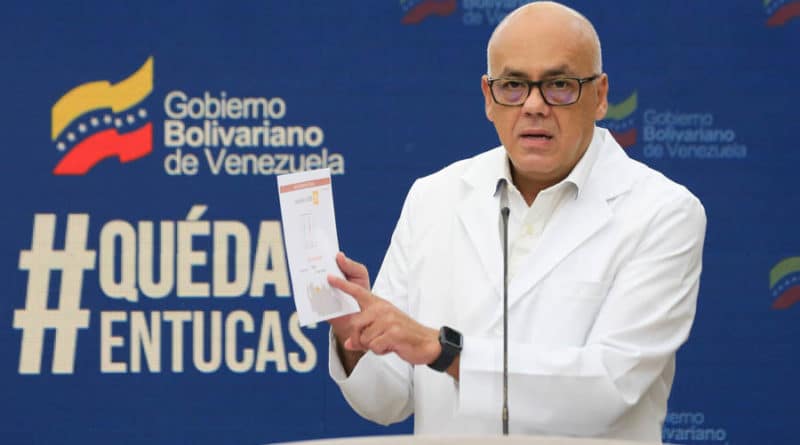 Venezuela’s vice president of communication, Jorge Rodríguez, reported this Sunday, April 19, 29 new cases of Covid-19 coronavirus in the country, 21 of them from the detected hotspot in the Roberto Vahlis baseball academy, in Nueva Esparta state, 5 in the Miranda state (3 of them in the case of the escort company that provides service to Empresas Polar) and 3 for entering through border states. The curfew was ordered in the Nueva Esparta state and the confinement of the Acevedo municipality of the Miranda state, because one of the young people from the baseball academy, who came from the Dominican Republic infected with coronavirus, went to a party they had prepared for him in that municipality.

Rodríguez reported that a “causal relationship” is being investigated between the focus of the Roberto Vahlis baseball academy in the Gómez municipality of Nueva Esparta state, and the focus of the Maneiro municipality, which emerged in the mayor’s office of that jurisdiction.

One of them was a director of the Roberto Vahlis baseball academy, who came from the Dominican Republic to Caracas, “and a scout also came from a famous baseball team in the United States Major Leagues, who came to see baseball prospects in Venezuela to be hired.” He indicated that the scout has already returned to the United States and there he was diagnosed positive for Covid-19. He also indicated that “there is a high probability that the director of the academy had already been infected at that point,” Rodríguez explained.

The next day there was a flight from Avior, from Maiquetía to Porlamar (Nueva Esparta state) in which the scout of the Major League team, the director of the baseball academy Roberto Vahlis, and officials of the mayoralty of the Maneiro municipality were also traveling. “We are requesting the listing of all the passengers of the Avior flight on March 14, because we are going to test all the travelers on the flight on March 14, and all the contacts of those travelers.”

“Two or three of those managers had permanent contact after they flew on an Avior flight from Maiquetía to Nueva Esparta, and they kept that academy open,” generating 41 unnecessary cases of Covid-19 so far (20 detected on Friday and 21 more detected. this Sunday).

Confinement to the Acevedo Municipality
Rodríguez explains that one of the prospective boys who was signed by an important team from the United States’ Major Leagues, traveled to his place of residence in the Acevedo municipality of Miranda state in violation of the quarantine, and was already infected with Covid-19. There he had a party celebrating his contract signing with the MLB team.

“Right now, we are doing an evaluation; we are going to completely comb the entire Acevedo municipality of the Miranda state, to assess the situation of the epidemic there,” explained Rodríguez.

Curfew in Nueva Esparta
Likewise, Rodriguez noted that investigations continue to be carried out throughout the state of Nueva Esparta, looking for possible cases of Covid-19.

For this reason, President Maduro decreed a curfew throughout the state of Nueva Esparta, from this Sunday at 8 at night until Monday at 10 in the morning, and from Monday it will be in force from 4 in the afternoon until the next morning at 10 am “This curfew will remain in effect until the authorities can inform the country that all cases have been detected.”

He indicated that, if the governor or the government officials who incurred the events that occurred in Nueva Esparta were Chavistas, “we would be just as energetic in what we are saying to him publicly.”