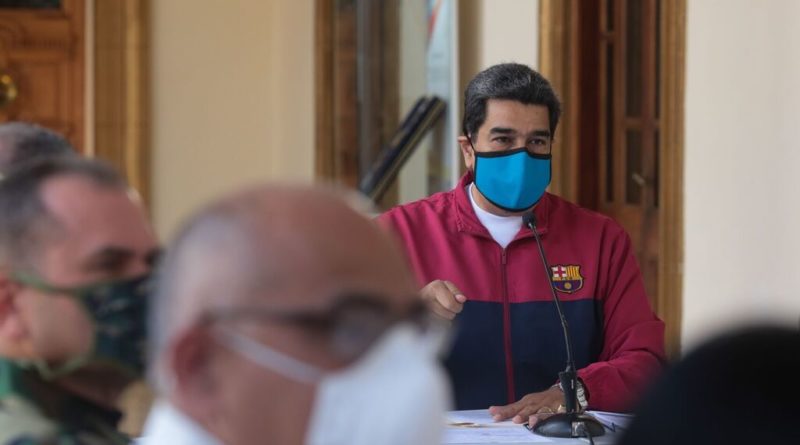 Venezuelan President Nicolás Maduro is very critical of the way Brazil and Colombia are addressing the pandemic. Faced with threats from Donald Trump, he said that his country is ready to defend itself.

Venezuelan President Nicolás Maduro is very critical of the way that Brazil and Colombia are dealing with the coronavirus. He called the President of Brazil “Coronaloco Jair Bolsonaro”, and denounced Iván Duque, President of Colombia, for rejecting the help Venezuela offered him. He also considered the need to refloat Latin American unity. Faced with threats from the president of the United States, Donald Trump, the president warned that his government is on alert. “Trump moves between personal hatred and his desire for reelection. He believes that by this means he will get votes (…), but they are real threats for which we are preparing to defend ourselves,” said the president in a dialogue with radio AM750 on the “La Pizarra” show hosted by Alfredo Serrano.


Double threat: Trump and the virus

In recent weeks, and as the coronavirus was advancing at a rapid pace around the world, Trump offered a reward for Maduro. The president of Venezuela referred to the advance of the Pentagon on his country in dialogue with Alfredo Serrano Mancilla on the radio program La Pizarra. “Donald Trump’s threats took on a personalized character as a product of his hatred, of his desire for revenge, like a cowboy from the Wild West. He takes out a poster with Maduro’s face, mustache included. “Wanted: $ 15 million.” I do not recall something like this has happening before,” the president said. In turn, he remarked that there was a media campaign in the United States to locate Venezuela as the focus of the pandemic. “In February, the media reported every day that the pandemic was going to have its epicenter in Venezuela, they said it every day and then they spoke of the need for humanitarian intervention when the coronavirus arrives in Venezuela, wishing us evil . Now they are targeting us as outdated cowboys from the 19th century,” emphasized Maduro.

2020 is an electoral year in Venezuela. New members of the National Assembly must be elected. Asked about the possibility of the vote being postponed, Maduro said that it will depend on the evolution of the coronavirus in the country. “At this point I do not know if there will be elections this year because we have this priority, and today it would be irresponsible of me to say that there must be elections,” said the president. So far the government is pursuing a successful policy to contain the pandemic. Across the country, there are 228 people with the coronavirus and just 9 dead. In the last 24 hours there were 23 new cases. Since March 16, the voluntary quarantine has been in force throughout the country. The president highlighted the speed of the measures adopted by his government. “There has been no curfew, there has been no suspension of rights, we have appealed to the conscience of the Venezuelan family throughout the country and we have had 85% compliance over more than a month,” said Maduro.

“We need a Bolivarian, Sanmartiniana vision”
When referring to the right in the region, Maduro characterized them as arrogant. As for the president of Brazil, he said that he was not up to the position in which the extreme right put him. “This man (Bolsonaro) does not measure up, he is a ‘coronaloco’, and the worst thing is that he affects people’s lives, their stability. He has irresponsibly led the Coronavirus spread to thousands of Brazilians, to the death of thousands of their compatriots,” said the president.

He also criticized the way in which the Colombian government is facing the pandemic. Maduro said that Duque was offered equipment to practice coronavirus tests but that he rejected it. “You ask me if I would accept help from Duque … We would even accept help from the devil if it is for the benefit and health of the people of Venezuela! Welcome the aid, we would coordinate it without any type of complexes because here, differences have to be put aside and act as statesmen, for our peoples, with stature, with height,” stressed the president.

Regarding the elections won by progressive governments in the region, Maduro said that it should not be trusted since a conservative threat persists. “It is not easy, it is a slowed down, lethargic progressive wave, because there is a brutal onslaught. Who expected a coup d’état in Bolivia? Not even Evo expected it. (…) We cannot ignore this onslaught against the continent,” emphasized the president.

He also highlighted the need to rebuild Latin American unity by promoting organizations such as the Union of South American Nations (Unasur) and the Community of Latin American and Caribbean States (Celac). In this regard, he recalled the words of Lula da Silva during a trip he made with the late former president Hugo Chávez Frías. “Lula once told all the fellow presidents at a Unasur Summit that no one could think of development alone, that even Brazil, which is a giant, could think that alone and detached from South America, it could achieve full development,” said Maduro.

The president stressed his faith in the peoples of the region to retrace a joint path. “The revolutionary and progressive forces have to give the continent a new direction that Néstor Kirchner, Tabaré Vásquez, Lula da Silva, Hugo Chávez, Raúl Castro, Fidel Castro (…) have already given them in the past. We already have an experience, a legacy, a doctrine, now we have to go and look at the roots of that legacy and that doctrine,” said Maduro.