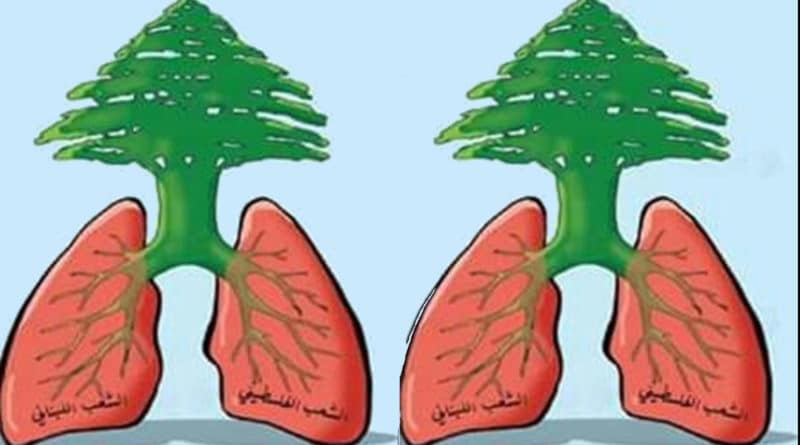 Sectarianism will destroy Lebanon thus affecting the Arab world. Now rescue your own historical chronology, ancestral diversity will be your strength.

Today, when humanity is going through a pandemic, a Lebanese newspaper publishes an insane cartoon depicting the Palestinian as the virus itself. This propaganda takes us back to the sows and appalling inhumane acts of racism.

Every racist is a person full of hang-ups

There are still burdens of the painful Lebanese Civil War, it usually happens. It is a Lebanese grouping still caught up in its own racist atrophy. Today they are a minority but very powerful with a lot of foreign support that need a divided Lebanon. It is about that retrograde, comfortable and eloquent Falangist right in its sectarian obscurantism. Fullish, and reduced in its sectarianism, cuts off its own patriotic plural wealth and self isolated from its Arab-Semitic universality.

They express from their operational ignorance that they are not Arabs, that they are Phoenicians (the Phoenicians are the same Canaanites, that is, Palestine, Syria, Lebanon and Jordan), the Lebanese and the Palestinians come from the same Semitic-Canaanite root. They feel western because they are Maronite Christians, we must remind them that all monotheism, the Judeo-Christian-Muslim trilogy is of Semitic origin, what today is the Arab mosaic. So if the argument is religious, then where are the secular values ​​of its idolized West.

Clumsy, they mix religion with ethnicity, typical of religious fanaticism, that although they are stamped on their beaches with dental floss they are just like the Taliban (we reproduce what we hate, the Greek Tragedy). They splash their mouths of democracy and freedom (to be accepted by the West), but they are recalcitrant classists, opportunists, employees who do not assimilate and despise their own Arab diversity, and also support the Western colonial anachronism, called (Israel).

Today part of the Lebanese Arab people has freed itself from backwardness and retrograded sectarianism. In the framework of this caricature of savage inhumanity and hatred, it is also to vindicate the fight against sectarianism and in turn reverse it in the mosaic of Lebanese heritage. Going to the rescue of their own diversity and historical homeland plurality, alienating and entering their own cosmovision, collecting their own cosmogony.

Sectarianism will destroy Lebanon thus affecting the Arab world. Now to rescue its own historical chronology, diverse ancestral will be its strength, beauty and salvation. Quite a feast.

Featured image: For a Lebanon without the retrograde virus of sectarianism. Courtesy Al Mayadeen