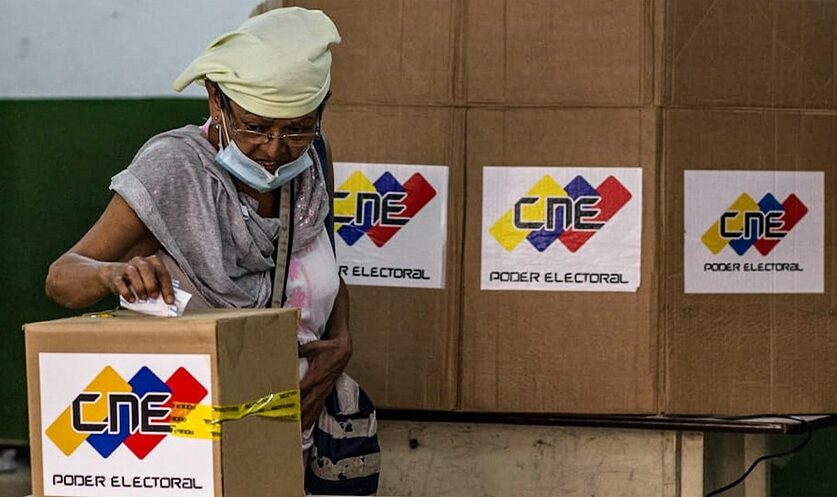 A woman casts her vote at the Jose de Jesus Arocha public school in Petare, Caracas, during a mock election for the upcoming parliamentary vote in Venezuela, on November 15, 2020, amid the COVID-19 novel coronavirus pandemic. - Venezuela holds parliamentary elections on December 6 with President Nicolas Maduro looking to take back control of the National Assembly. (Photo by Cristian HERNANDEZ / AFP)

I.Preface
In the Venezuela of the 21st century, perhaps now as never before, it is important to stop and observe the electoral results in detail. If we stick to the most visible result—despite the poor choice of the US government and the few who, counter to all political wisdom, continue supporting the fiction of the “interim government”—the official candidates of Chavismo won the majority of the contested positions. Quite significantly, the anti-Chavista opposition returned to the electoral fold, which undoubtedly constitutes extraordinary news for Venezuelan society.

That said, it is appropriate to examine data that I consider to be not only very valuable, but as essential as it is revealing, and that nevertheless seem to be absent in other analyses of the political class—at least those made publicly.

What follows is a ruthless analysis of the results of the contest on November 21, 2021. To this end, I proceeded to reconstruct the historical results of regional elections (for governors) since 2004, reviewing and processing the information available through the National Electoral Council (CNE). I decided to omit the data related to the 2000 mega-elections, because on that occasion the position of President Hugo Chávez was also in direct dispute, which makes that a very unique historical contest, not comparable, in my opinion, to the regional elections held later.

In the case of the state of Barinas, where the CNE has not yet proclaimed the governor-elect (as of Thursday, November 25, 2 p.m.), I counted the votes offered in the first official bulletin of the electoral body.

RELATED CONTENT: If Opposition had United PSUV May Have Won Only 6 States—Unusual ‘Rigged Election’

Having made such considerations, I now present the first table, which summarizes the result of the five regional contests:

Next, let’s review in more detail.

II. Participation percentage
The following graph shows the voter turnout in each year since 2004:

As can be seen, popular participation in the regional electoral contest on November 21, 2021 was at its all-time low, decreasing 18.84 percentage points compared to 2017.

III. Chavismo and opposition total votes
The following graph includes information on the number of votes received by both the official Chavismo candidates and the opposition:

The most relevant data is that in the elections of November 21, 2021, and for the first time, the number of votes obtained by Chavismo was less than the amount received by the opposition candidates. Additionally, Chavismo lost almost two million votes in relation to 2017.

Taken together, Chavismo and the opposition constituted 41.22% of the REP, a significant decrease of 19.74 percentage points with respect to the regionals of 2017, and of 21.76% with respect to 2008, when both represented 62.98% of the REP. This data is very important, as it constitutes a kind of index of political affiliation, and it describes the way in which political disaffiliation has been gaining ground in recent years.

No other data so clearly reveals the opposition’s disaster as a result of the divided vote. In fact, if we thoroughly review, and take as a reference those states where Chavismo was victorious with less than 50%, adding only the votes obtained by the opposition candidates in second and third place, the opposition could have won in nine states: Amazonas, Anzoátegui, Apure, Falcón, Guárico, Lara, Mérida, Táchira, and Trujillo. Barinas should be added also, if the candidate of Chavismo emerges victorious. Adding these to the three victories actually achieved (Cojedes, Nueva Esparta, and Zulia), the opposition would have control of most of the governorates: 57% of them, to be exact, if we excluded the Mayor of Caracas from the account.

VII. Very brief preliminary conclusion
I have considered it necessary to privilege the detailed review of the electoral numbers and to show them in the most orderly way possible, rather than trying to offer any explanation about the performance of the political forces in conflict. There has already be an opportunity to present the latter.

In any case, I would just like to insist on a point that, it seems to me, is indisputable: in Venezuela in 2021, the politically disaffiliated population is a solid majority. A majority that, for the moment, cannot find a political expression. Will the political class be capable of capturing the inspiration, or rather of putting itself in the place of the popular majorities? It is something that remains to be seen.