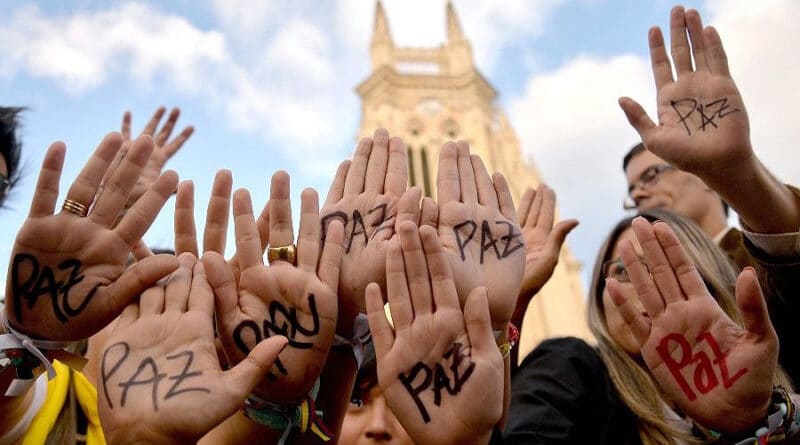 Cuba oversaw, like no other nation, the peace process that Colombia experienced just five years ago. Havana hosted the first consensus between the government of then President Juan Manuel Santos and the leaders of the Revolutionary Armed Forces of Colombia-People’s Army (FARC-EP) in August 2016.

Three months later—on November 24 of that year—Rodrigo Londoño Echeverri, leader of the defunct guerrillas, and former President Santos signed their names in Bogotá to pave the way for the implementation of the process negotiated for at least four years.

After the signing, more than 13,000 combatants laid down their weapons and joined civilian life. Over the next two years, Colombia experienced hopeful days in which peace seemed possible.

But violence increased again after the current president, Iván Duque, took office in 2018. Since day one, he questioned the pact reached by Santos and the FARC, and constantly amplified hate speech against guerrilla members even though they had already surrendered their weapons.

Today, the cycle of violence in Colombia seems unstoppable. The daily news of the murders of ex-guerrillas, social leaders, Indigenous people, and civilians are coming constantly, even though they do not occupy the front pages of the pro-government media, and never is there even the smallest of criticism about the constant atrocities from the Biden Administration. That silence is a green light to continue the bloodshed with no fear of sanctions or reprisals from Duque’s handlers in Washington.

Duque’s policy is to turn a blind eye to the needs of his people and their recurring calls for peace and the agreements signed five years ago.

From 2016 until now, almost 300 ex-guerrillas have been killed, and former members of the former guerrillas point to a single culprit: Duque and the culture of paramilitarism.

“The government’s inaction, along with the economic and social exclusion drives many of us to despair,” ex-combatant Jose Zamora said. “It is a perfect breeding ground for people to justify their return to arms and the underground.”

This week, on the occasion of the fifth anniversary of the signing of the agreement, Cuban President Miguel Díaz-Canel assured that the island is willing to continue supporting the peace process together with its brotherly people of Colombia, any way it can.

Cuba’s support to the Colombian people is aligned with the will of Commander-in-Chief Fidel Castro Ruz, whom all of Cuba remembers today, on the fifth anniversary of his physical passing, and who played an indispensable role in the consensus reached in 2016 between Santos and the FARC-EP.

From the Palace of the Revolution, Díaz-Canel urged the Colombian government to comply with the agreement and to take more effective measures to protect the lives of former guerrillas, social leaders, and human rights defenders.

“Colombia’s quest for peace must be a priority for Duque,” Díaz-Canel said, “and those efforts must be supported by the rest of the Latin American countries and those from other latitudes of the world.”

The Caribbean island is receiving many expressions of gratitude from Colombians in these days of remembrance. The Colombian Movement of Solidarity with Cuba recognized and thanked the Cuban government and people for their invaluable and unconditional efforts for peace in their country: “We recognize Cuba’s effective contribution as a guarantor and host country of the peace processes that have taken place in Colombia in the last four decades, and we highlight its decisive willingness to continue to be a safe harbor for dialogues,” the movement recently stated.

The Colombian people “will be eternally grateful. The brotherhood between our nations will continue to be strengthened,” the group added.

Despite the uncertainty of the road ahead, Colombians maintain the hope of living fearlessly. All Latin Americans feel and suffer from the Colombian reality. Of the words spoken by Díaz-Canel in honor of Colombia, one phrase from his speech stood out, and that was his statement that peace is possible, but it requires confronting the suffering of the past. Reconciliation will be the only way to a stable and long-lasting peace.