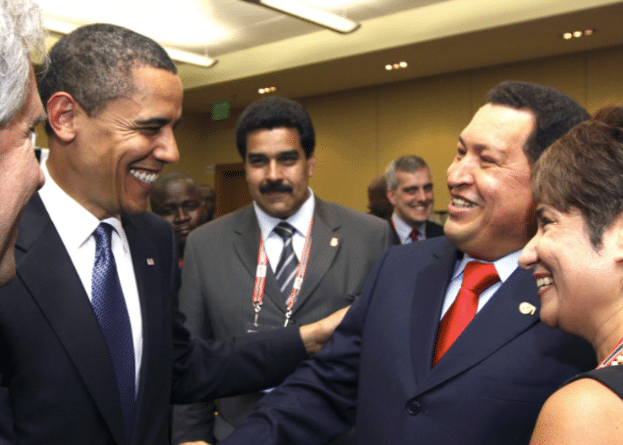 A new president for the USA, a new leaf, new opportunities for a better world.

If that is in the mind of soon to be USA President Joe Biden and his millions of  followers, then he would do well to distance himself as far as he can from the ill conceived, badly intentioned policies of his predecessor.

There is no area of foreign policy where this would be easier to do, has few if any  downsides for the USA and plenty of upsides, and would bring relief to millions of  people in this hemisphere. I am referring to the USA’s foreign policy towards  Venezuela. Here are the reasons why this is so.

It is easy. It would be very easy for Joe Biden to distance himself from Trump’s  failed policies toward Venezuela as there are no complicated international  agreements required. In the scale of world issues, Joe Biden has bigger problems  to solve than to maintain a draining state of aggression against Venezuela.

Hardly any downsides, plenty of upsides. The only downside to having a  rapprochement with Venezuela is that Joe Biden would displease those who did  not vote for him. He owes nothing to the anti-Venezuelan contingent in Florida.

The sanctions have failed. Trump’s illegal economic sanctions- aimed at overthrowing the Venezuelan government—have certainly caused havoc in the  Venezuelan economy, but they have not destroyed it, nor have they brought  down the government. The vast majority of Venezuelans recognize the USA, not  their own government, as the cause of their suffering and rally round President  Maduro who is rightly seen as defending them. Ending the sanctions would not  absolve the USA of responsibility for the great harm it has inflicted but it would  show that the new president intends a very different approach to its relations  with its Latin American neighbours.

Trump’s backing of the extremist Venezuelan opposition has failed. Venezuelans are aware it was these politicians who asked for the sanctions that have caused  them so much pain. In an unholy alliance with the USA these leaders of the  opposition have been party to the theft of billions of dollars of Venezuelan assets  in the USA. They are despised not just by government supporters, but also by the  majority non-extremist opposition. They are political corpses with not a sliver of a  chance for any political future and President Biden would be wise to repudiate  them.

The armed paramilitary and mercenary attacks have failed. With the help of Colombia, the numerous attacks, invasions and assassination attempts have failed  to bring down the Venezuelan government and have only increased the  indignation of a remarkably peaceful population. President Biden should make it  clear that this is not how he intends to conduct foreign policy towards Venezuela  or any other country in the hemisphere.

The attempts to bribe, coerce, persuade the Venezuelan Armed Forces to rebel  have failed. There is an increasingly strong military-civilian union in Venezuela  that fervently defends the Constitution, thanks to the legacy of Hugo Chávez.  There are now more than three million civilian members of the militia. Any military  intervention in Venezuelan soil would not be a quick invasion but a protracted  occupation which would certainly besmirch a Biden legacy.

Demonizing Venezuela has failed, and it has become an example of sovereignty  and independence for the entire region. Not even in the Organization of  American States, under a most subservient USA leadership, were the member  nations prepared to back attempts to invade Venezuela. President Biden has it in  his power to reorient the OAS back to the goals for which it was originally  founded and for which he will be applauded.

The Lima Group is an embarrassment to the USA and Canada. Professional,  principled, career diplomats in these two nations cringe at the thought that for an  illegitimate attempt at regime change, they have aligned themselves with some of the most undemocratic, corrupt, anti-human rights, and violent governments in the region such as Colombia, Peru, Brazil, Ecuador, Haiti, Chile, Honduras,  Guatemala, and Panama. People are known by the company they keep. The same  is true of nations.

The Trump threats of military invasion have led Venezuela to seek military allies elsewhere. Venezuela is a peaceful nation, never having gone to war except in the 18th century to gain its independence. So, being under threat, Venezuela has  made military alliances with Cuba, Russia and China, who have generously  provided the defensive arms and communication technology needed. Armed  intervention against Venezuela would be met with the help of these powerful  allies. President Biden would reap a great deal of good will in Venezuela and in  the entire region if military threats against Venezuela ceased, starting with the  withdrawal of the Southern Command from the Caribbean.

The USA can again have commerce with a very rich nation. Venezuela is a  country rich in oil, gas, minerals, precious metals, and agricultural resources and it is close to the USA which facilitates transport. Venezuela would welcome a re opening of normal commercial arrangements with the USA, as with many other  nations, based on mutual respect for the sovereignty of all parties.

There is no obvious reason for the USA’s animosity. Venezuela has not threatened  the peace and security of the USA; has not issued any threats; does not have any  military capability to invade or attack the USA, or to overthrow its government. Venezuela is not training terrorists or exporting terrorism. It is—by all  international standards—a vigorous enemy of narcotraffic. Venezuela has always  been a friendly nation. By changing the aggressive stance of the USA towards  Venezuela, President Biden can show to the world that he is truly a man of peace and that the USA has friends, not just interests.

President Biden can be on the right side of history. The Latin American region is  tired of extreme right-wing governments and is steadily shedding them: in Bolivia, in Argentina, and soon through upcoming elections, in Brazil, Chile, and Ecuador. President Biden can make his mark in history if he stands against the grasping,  supremacist elites that have been responsible for so much corruption. His first  opportunity to do this will be to recognize the result of the parliamentary elections in Venezuela on December 6th. If anyone knows the value of such  recognition it is him.

President Biden can be true to his principles. Finally, we are led to believe that Joe Biden is a man of deep religious principles. So is Nicolás Maduro whose spirituality is well known to his people but not to the world. How uplifting it  would be in these especially difficult times for these two Catholics to apply their  shared principles of good will to rebuild their countries’ relationships with each  other.

Featured image: In 2009, during the V Summit, in Port of Spain, Obama  and Hugo Chávez hacked hands. Photo by Reuters.