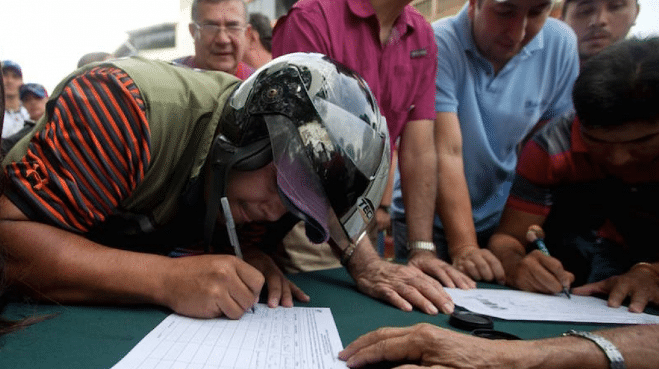 The year 2021 has just come to the end and as tradition has it, at least in some parts of the  world, many do a review of events of the year and many others more constructively start working on the so-called personal resolutions and more hopefully that the new year may bring the best for our fellow world dwellers.

Author Roger Harris offers a 2021 political review of our Latin-American and Caribbean region vis-a-vis the United States and he notes accurately the “popular electoral victories in Chile, Honduras, and Peru”. Then we had the landslide re-election of president Daniel Ortega in Nicaragua and the major victory of Venezuela’s governing party PSUV in the regional and municipal elections that consolidated the support for the Bolivarian revolution even when “the extreme right opposition (including Guaidó’s party) was compelled to participate, implicitly recognizing the Maduro government.”

But the extreme right opposition (at odds with the democratic opposition that participated in the elections and accepted the results) may already be plotting its next move in order to produce the regime change masterminded by the US in Venezuela. The plot involves a referendum to recall president Nicolas Maduro.

A recall referendum to topple president Hugo Chavez has been tried by the opposition before in 2004. That failed with more than 59% of votes against. Another referendum was attempted in 2016 to recall Nicolas Maduro in 2016 but it did not materialise based on current legislation.

A group that calls itself Venezuelan Movement for the Recall (MOVER) allegedly is already preparing for that to happen. Interestingly, reports come from US-based sources like Voice of America and other rightwing sources from Venezuela and Europe suggesting that the recall plot may well have a media involvement promoting the movement. However, this might grow to be one of the main political issues in Venezuela in 2022.

But a recall is easier said than done.

Timeline for the recall process.

• According to Article 72, the recall petition can be initiated after the half point of the president’s term (Maduro’s in this case whose term is 2019-2025). That would be as soon as 10 January 2022.
• According to Article 233, if the recall succeeds within a year, that is by 9 January 2023, then a new election must be held within the following 30 days. The vice president will be in charge until the new president is inaugurated to complete the term until December 2024 (the constitutional end of the current presidential term).
• If the recall succeeds after 9 January 2023, (remaining only 2 years of Maduro’s term), the vice president will take charge until the end of the term in December 2024. That will be Delcy Rodriguez.

Again, according to Article 72, for the recall to succeed the following must occur:

• The recall petition must be signed by at least 20% of the registered voters.
• 25% or more is the required turn out to vote on the referendum.
• Number of voters in favor of the recall will have to be equal or more than the initial voters in favor of Maduro in the elections of 2018.

However, initial complications arise. Are Venezuelans abroad allowed to sign and vote as the opposition seems to be expecting? In Canada, for example, that would be very difficult for the lack of diplomatic representation, not to mention a possible double standard considering that Canada did not allow Venezuelans to vote in 2018.

Aside from the legal wrangling leading up to the recall process in terms of required numbers, We can foresee some difficulties that the opposition will be facing.

The timing is crucial and the opposition would want to end the recall successfully within the next year so they can have a new presidential election. Otherwise the governing party will continue in power until the end of Maduro’s presidential term.

However, the key question for the opposition is who will be their candidate for president if the recall succeeds within 2022?

That is not clear given the serious internal divisions and Guaidó’s support fading.

Within the opposition we are seeing some positioning already taking place that may widen the political gap.

• Julio Borges has resigned his position in the Guaidó “interim government” and is trying to distance himself from the failure of Monomeros in Colombia.
• Leopoldo Lopez is putting himself in a more visible position with his statements in Spain and with his trip to Chile to visit his rightwing friends there including neofascist José Kast. He is also quite well-known to incite violence.
• Both Borges and Lopez are fugitives from Venezuelan justice system and reside abroad.
• Henrique Capriles of the rightwing party Primero Justicia, former governor of the state of Miranda, may also be a candidate and could likely be endorsed by the US.

Finally the ultimate question is, assuming that the recall referendum happens in 2022, will Venezuelans vote to recall Maduro?

That would be very unlikely. Maduro and his party PSUV can still claim wide support from Venezuelans. Most recently it was shown by the 19 of the 23 State governorships won by candidates of the PSUV and its coalition in the regional elections of November 21. Also, Venezuela has shown strong signs of economic recovery despite the US economic blockade with lower inflation and increased oil production and exports to one million barrels in 2021. The successful handling and control of the COVID pandemic also gives credit to the Maduro administration.

At the international level, one more visible positive outcome for the Maduro government is that 92% of the 193 state members at the UN recognise Venezuela’s government. Only 16 countries voted not to recognise.

All these positive signs send a very strong message to Venezuelans that Chavismo is not the enemy and president Nicolas Maduro does not deserve to be recalled.

Featured image: Venezuelans signing a recall petition in one of many controversial and erratic attempts to get rid of Chavismo. Photo by AP