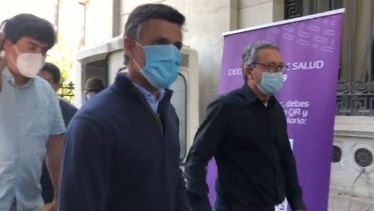 This Tuesday, December 7, a group of Chilean demonstrators received the fugitive from Venezuelan justice Leopoldo López at the former Congress of the Republic, in Santiago de Chile, with a barrage of eggs and slogans denouncing him as a criminal, murderer, and coup leader.

The Venezuelan opposition figure visited the building to meet with representatives of the Chilean extreme right participating in the Constitutional Convention, the Chilean constituent body in charge of writing the new post-Pinochet Magna Carta.

Just at the moment when López was entering the building, his companions alerted him of the “attack” and rushed him into the former congress. Although none of the eggs appeared to hit López directly, he and members of his entourage entered the building with their clothes splattered with yolk, according to the testimony of the Arturo Zúñiga, one of Lopez’s hosts.

RELATED CONTENT: Leopoldo López’s Latest Gaffe: He Calls on People to Take to the Streets over Supreme Court’s Barinas Decision

Within less than 48 hours since his arrival in Chile, the Venezuelan extreme-right figure has unleashed a torrent of rejection and criticism from sectors that consider speeches López has delivered as interventionist. While in the country, López took it upon himself to advise Chileans on political threats from left and progressive movements

With all this, the anti-Chavista spokesperson continued his visit to Santiago de Chile while citizens advanced with the preparations for the second round of presidential elections on December 19.

The “example of Leopoldo”
Leopoldo López’s stay among Chileans has centered on providing support for the electoral campaign of right-wing candidate José Antonio Kast of the Social Christian Front. He has also tried to disqualify the leftist from the Apruebo-Dignidad party, Gabriel Boric.

RELATED CONTENT: What Did Leopoldo López and Yunior García Gossip About in Madrid?

In his comments to Chileans, López maintains that he is a “victim of the dictatorship” for having faced Venezuelan justice in 2014, conveniently omitting the dozens of deaths caused by the destabilization plan and the violent protests aimed at overthrowing President Nicolás Maduro, initiated and supported by López.

In electoral matters, López continues to reject the institutions of the Venezuelan state, such as the National Electoral Council (CNE), and expresses his hope that external actors—the European Union and the United States, for example—dictate guidelines for Venezuelan internal affairs, and impose policies other than those established by the national Constitution and Venezuelans themselves.

Featured image: Venezuelan fugitive of justice was greeted with eggs by anti-fascist demonstrators in Santiago, Chile. Photo by RedRadioVE.