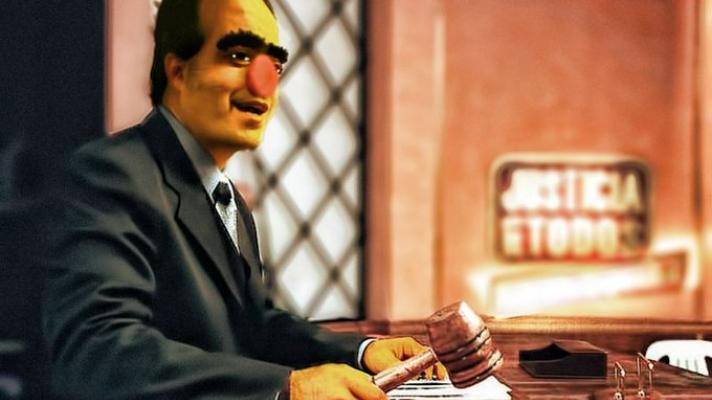 We are witnessing live the unveiling of a fiction that has lasted for too long; whose protagonists belong to the most extreme of the anti-Chavismo sectors. The outcome of the unveiling is destined to propitiate the failure of the anti-Venezuela US strategy. Both the excesses of its dauphins and hitmen have worn out the age of anti-politics, and these are now being ignored because of the prevailing reality in the country, a reality in which most of the political parties are participating in the democratic arena.

Julio Borges has finally decided to depart from what Washington named the “interim government in charge of Venezuela,” with a confrontational speech reminiscent of those of his years in the program Justicia para todos [Justice for All] on RCTV. This time Juan Guaidó was on the receiving end of the the Primero Justicia (PJ) leader’s accusations. Borges now advocates that “the interim government should disappear completely.”

The contradictions within the sector of the Venezuelan opposition that has the closest ties with the United States (with its federal government, Congress, Wall Street and south Florida) increase as the days go by and the deadline of the “interim government” approaches, even though Guaidó has already announced that he will perpetuate his fictitious status until there are “free presidential elections.”

The only way this hoax can survive is through US endorsement, since from there come the resources that the Voluntad Popular (VP) bandits use, who are now the sole beneficiaries of the resources that the US federal government has made available for them through the Treasury Department, USAID and NED, as well as money stolen from the Venezuelan State through the Western financial system.

The communication and propaganda media aligned with this particular faction takes care of Guaidó and VP’s public relations. But these media can no longer hide the aforementioned contradiction, as it is now public and out in the open.

Boxing rounds among peers
“The interim government was an instrument to get us out of the dictatorship, but now it has been deformed to become a kind of an end in itself, managed by an upper caste,” Borges has snapped. “It has become bureaucratized and no longer fulfills its function. It has to disappear.”

Borges even highlighted a curious fact: the “interim government” has 1,600 officials—this is the framework behind a parasitic looting operation which has been aired through scandals in the handling of Venezuela’s national assets abroad. Such is the case of Monómeros, a Venezuelan company based in Barranquilla, Colombia, which is now controlled by Uribe’s government in collusion with said “officials of the interim government.”

“The assets management has been a scandal,” Borges accused. “A trust must be created so that there is transparency. There is no accountability, the assets are used for personal purposes.” Thus Borges, once again, has tried to wash his hands of his key role in the origins and development of this looting strategy, chalked up in Venezuela as well as in Colombia.

In fact, for Borges the problem is not the “interim government” itself, as an entity, but of those who “govern” it. This is a rhetorical guise to showcase that he is asking for a leadership rotation, as was done during the National Assembly’s (AN) 2015-2021 term.

“The things that the interim government does, such as the humanitarian issue, the international issue, those have to continued,” declared Borges. “But these must be absorbed by this new political platform, as well as civil society, to manage them efficiently, and not under an interim government that simply wants to perpetuate itself and become a part of the problem and not part of the solution.”

Borges mentions a “new political platform and civil society” that most surely brings with it all the NGO and political organization brokerage that aims to replace the Venezuelan state by other means, which was earlier investigated and analyzed by Misión Verdad in this special report on the Civic Forum and which seem to be Borges’ cup of tea.

Before founding the Primero Justicia (PJ) party, Julio Borges became the head of an NGO called Asociación Civil Primero Justicia in 1992. He referred to his organization as “Justicia de Paz,” getting notoriety within the corrupt office that the Fourth Republic formed through austerity. With this organization, Borges managed his way into the drafting of the 1999 Constitution promoted by the Constituent Assembly which had been called by Commander Chávez.

This is how Borges came to life within the country’s political scene, together with the image that he had made thanks to Marcel Granier’s endorsement from RCTV, with the Justicia para todos TV show.

Justicia de Paz received funding from Antonietta Mendoza de López, Leopoldo López’s mother, who at the time (1998) held the position of public affairs manager at the PDVSA Services Division. She gave a check to the Inter-American Foundation (IAF), an autonomous body of the United States government, for the benefit of the Julio Borges-led NGO. This corruption case was justified by the same “judge” who connected this money with the development of the “peace” program; “rather, I am very proud of this,” he unscrupulously said in 2013.

The PJ party was created in 2000 by the triad formed by Henrique Capriles, Leopoldo López, and Julio Borges—the latter being its originator and planner. Since then, Julio Borges had been a Miranda state deputy and has been the general coordinator of the party.

Tony Cartalucci comments that PJ received monetary funds granted by the National Endowment for Democracy (NED) during a whole decade.

Who can doubt Borges has putschist vein? In an April 11, 2002, video he can be seen as a spokesperson—along with the jewels of homegrown fascism, Leopoldo López, Armando Briquet, Gerardo Blyde and Henrique Capriles—demanding the resignation of President Chávez as well as of the entire PDVSA executive board of directors—a preview of the Carmona decree.

But the López-PJ alliance broke away in 2009, according to revelations by unreliable sources during a January 2015 impasse. However, the path of coup always tied them together: Borges, according to Patricia Poleo, maintained ties with the military coup military discovered by the Nicolás Maduro government (Operation Jericó, 2015).

Thus, PJ accuses Guaidó of what it had itself built together with its anti-Chavista peers and with the support of the US and Colombian governments. Let us not forget that while Borges refused to sign a dialogue agreement with the government in 2018 and went on several tours asking for “sanctions” to be imposed on “officials,” which have clearly resulted in harm for the entire population, he also directed the Maduro assassination attempt which took place on August 4, 2018 on Avenida Bolívar in Caracas.

This was confessed by the head of the Communications Directorate of the Presidential Personal Guard, Ovidio Carrasco Mosqueda, who worked in one of the security circles closest to the president for four and a half years inside the Miraflores Palace, and confessed that he had infiltrated the government under Julio Borges’ orders to carry out a coup d’état.

Whether he lived in Caracas or “in exile,” Borges just kept adding fuel to the fire.

What will happen to Washington’s strategy now?
Most likely, the Joe Biden administration will give Juan Guaidó a certain “political” status, in the way the European Union did, in case it decides to scrap the “Guaidó tactic” as it stands today. Borges’ request to dissolve the “interim government” would be transformed into something that would in any case be in accordance with Washington, Florida and New York’s next requirements to continue with the siege and suffocation of Venezuela.

If it survives, the fake Guaidó government now only has the support of five parties with little or no influence, with the exception of VP, which is the one maintaining the umbilical cord with the declining US empire. The contradiction within Venezuelan fascism has set the United States’ house of cards on fire, and there is little that it can be do to come up with a successful damage control strategy through its media and political spokespersons.

The United States, Europe and Asia recognize the failure of the Trump-Biden strategy, and it is time for constructing another international relations paradigm between the US and Venezuela, as President Nicolás Maduro has suggested.

Chavismo’s greatest demand has always been the lifting of the US-imposed blockade, the sanctions regime of which was, for many years, a Julio Borges request. However, the nominal disappearance of the “interim government” does not necessarily imply that the prerogative of the Bolivarian government would be fulfilled. Both the gold highjacked by the Bank of England in the UK and the billions in money and Venezuelan assets stolen by the United States would still remain in their hands.

The real power behind Guaidó is in the Global North. The Guaireño is just another piece of the puzzle in the transnational war against Venezuela.