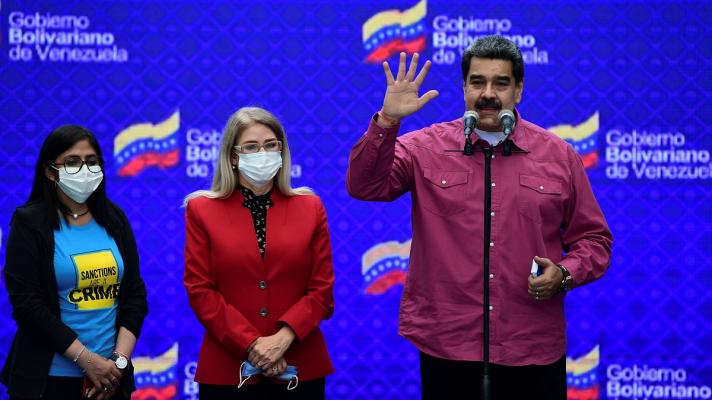 At dawn on Monday, December 7, the authorities of the National Electoral Council (CNE) of Venezuela released a first report with the parliamentary elections results, which provided the essential data that settled this important electoral event in the country.

The first bulletin from the electoral body arrived with 82.35% of results transmitted electronically and 5,264,104 votes counted, and indicated that 31% of registered voters participated.

In this electoral contest, the Great Patriotic Pole (GPP, an alliance that groups together the United Socialist Party of Venezuela—PSUV—and other parties of Chavismo) obtained 3,558,320 votes (67.6% of the total).

The United Venezuela coalition, an alliance made up of the Primero Venezuela party (PV, split from Primero Justicia), Voluntad Popular (VP) and Venezuela Unida, obtained 220,502 votes (4.19% of the total).

The Communist Party of Venezuela (PCV) and the Popular Revolutionary Alternative (APR), a splinter party of the GPP registered 143,917 votes (2.73%).

If the trends remain, after the counting process is completed, the GPP coalition could reach a majority of more than two thirds in parliamentary seats, which would lead to an undisputed victory for Chavismo, effectively concluding the previous political cycle of the outgoing National Assembly (AN).

In greater detail, the head of the Chavismo campaign command, Jorge Rodríguez, also revealed this Monday that the Gran Polo Patriótico (GPP) achieved 34 of the 44 deputies on the national list and won 24 lists (corresponding to the territorial division of the country) and 87 constituencies, which undoubtedly consolidates the new political cycle of the Bolivarian Revolution.

However, the recorded level of participation has a value beyond the mathematical. For Venezuelan institutions, this result acquires a symbolic and emblematic value due to the context that the country is going through.

The consistency of the economic blockade against the Bolivarian Republic, trigger of a generalized economic discontent; the damage to the country’s public services; the fall in the national fuel inventory, which severely affects mobility and adds to the context of a pandemic; migration out of the country estimated in millions of registered voters; as well as the call for abstention made by some important spokespersons of the Venezuelan opposition (from the ultra-right sector visibly aligned with the United States) and which clearly penetrated part of the electorate, are, simultaneously, factors of great weight that influenced this percentage of participation.

Hence, the registered participation means that a great segment of the population maintained a clear position of resistance to the factors that generate apathy and abstention. A diverse group of voters in the country did not give in to foreign “maximum pressure” actions, and this makes these figures significant and satisfactory beyond the mere mathematical.

For the Venezuelan political system, the statistical rates of participation are not a factor in determining the legality of the new AN. There are no minimum figures referred to in the national Constitution, for example, required for legitimacy, and this implies that the next parliament will be authorized to exercise all of its functions.

Although some commentaries on the elections refer to the word “legitimacy,” the truth is that the Venezuelan and foreign anti-Chavismo that promotes this false dilemma is the same that promoted the “interim presidency” of Juan Guaidó without a single electoral vote and completely outside of the Venezuelan Constitution.

Hence, the Venezuelan institutions will not give in to these false dilemmas, much less when the exercise of the vote of those who did not abstain have now enabled the political channels to re-institutionalize Parliament and overcome the prolonged political stalemate that affects the country.

Perhaps the most important success achieved in this electoral contest is precisely the organization and the happy ending of it. In an atmosphere of clear pressure against the country, coming from the United States and the European Union (EU), the elections were held under many calls of non-recognition, and following the proposal of a delay ruled to be outside the constitutional mandate. Pressure centered on Miraflores, the seat of the presidency, criminalizing the country for even organizing elections.

Now, all of these hurdles were overcome by yesterday’s election. The country gains in recovery from within, of its institutionalism and political stability, closing the disastrous parliamentary cycle that preceded it. No longer will parliament be an instrument functioning according to an agenda of attempted destruction of the Venezuelan public power, as it has for the last five years.

The country overcame all the critical points of “maximum pressure” orchestrated by the now outgoing Trump Administration. In this sense the parliamentary election has put a full stop to the toughest period of siege the country has suffered in over 200 years as a republic.

None in Venezuela could have foreseen the tangled roadmap for the removal of national powers, and the dismemberment of the country through political means, constitutional or not, attempted by the US government and its allies. Now they have failed.

On the other hand, President Nicolás Maduro, who turned the parliamentary elections into a plebiscite by stating that he would leave office if the opposition won, was legitimized by the result and stands again as the most politically and electorally solid figure in the country.

In strictly symbolic terms, 2020 ends for Venezuela as the year that Trump promised to remove Maduro from office—but it’s Trump who is leaving.

ABOUT THE ELECTORAL RESULTS

The United Socialist Party of Venezuela (PSUV), as the main force of the GPP, has risen with a clear and consistent majority over the other political organizations, closing 2020 with the most important political event for the country, in their electoral victory, and with aspirations of aligning Parliament towards a new national stability beginning next year.

This implies new possibilities for Chavismo in the exercise of governance, in a new portrait of political realities that clearly diverge from those of January 2016. Chavismo also continued on the victorious electoral path and adds a new conquest to the electoral cycle that began in 2017 with the election of the National Constituent Assembly that year, and continued with the victories achieved by an overwhelming majority in governorships, mayors, and then in the presidency itself in 2018.

This election left electorally relevant data. The first of these is the emergence of new opposition forces, with new parties, which made their debut in national politics, winning seats in Parliament.

Several of these parties, although they come from divisions of other anti-Chavista organizations, have assumed the electoral role of capitalizing on the spaces that the abstentionists left open. They have proposed to lead disgruntled and politically orphaned opponents, and have planned to join the AN in conjunction with Chavismo on some basic points, such as rejection of the economic blockade and military threats against the country.

The opposition also sees the return of AD and Copei as political forces. This was confirmed: AD received 419, 088 votes for 7.08%, the party of the so-called G4 that remained in the electoral arena the most, retaining some of its political capital. Copei received 170,589 votes, for 2.88%.

This election day represented another milestone: the disappointing balance for the PCV, with just 2.74% of the votes, obtaining even fewer votes than Copei. The PCV aligned itself with the APR alliance and was preparing to challenge Chavismo from the left. But this separation from the GPP only exposed the real electoral weight of their supporters.

In fact, the supporters for the PCV might very well number less than the 162,000 votes they received, since the dissidents of Tupamaros and the PPT participated in the APR. All this supposes the thesis many times affirmed, even by the elected deputy Diosdado Cabello himself, that the votes for the PCV historically came from Chavistas who voted for them out of sympathy, but not out of militancy.

The PCV data reveals that it could get more seats if it continued in alliance with the GPP. It is also recorded that the belief in the breakdown of polarization is false, especially from the left. It also shows that electoral splinter groups breaking away from Chavismo are doomed to failure.

Likewise, the PCV proved not to have done “organic”—understood in Venezuela as grassroots—political work. Their campaign did not have a solid electoral offer either, and did not have a consistent narrative. It was focused on victimhood and in order to stoke social discontent in their favor, they diverted their narratives to a fierce attack on the leadership of the PSUV and attempted to stigmatize followers of the Chavistas.

Everything led to a poor result, failing to reach expectations generated by the sharing of their slogans and campaigning on social media networks by some Chavista accounts with many followers, electorally dissident, who gave them a strong presence. The results, compared to what was foreseen in the digital sphere, ended up being abysmal, replicating the phenomenon of dissident Eduardo Samán contesting the Mayoralty of Caracas with the support of the PCV and PPT in 2017.

The new AN makes its way into Venezuelan politics, giving rise to a new space for national détente. It will now have among its main challenges a return to the primary space for debate in the country, the Hemicycle (the parliamentary floor), and thus begin to retake its place among the national powers.

However, new challenges open up for Venezuela. The first of these will be to undertake new struggles on the external front to diminish the application of the tight economic blockade against the country, the main critical point in the national climate.

Another important challenge for the new AN will be to undermine the alleged artificial and spurious continuity of Juan Guaidó and his entourage of deputies who, under the auspices of the United States, will seek to sustain themselves indefinitely and outside the constitutional period as a “legitimate AN,” essentially subsisting on their US support. This point will be instrumental for the aggressors of Venezuela, and a subject for deeper analysis.