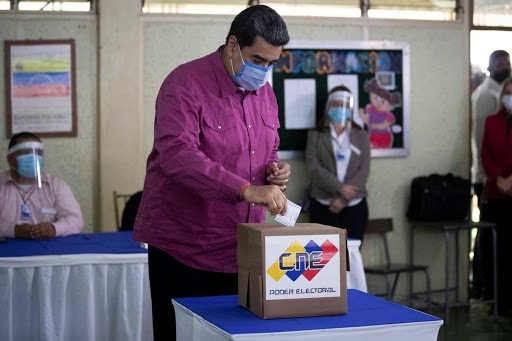 Caracas, Dec 6, 2020 (orinocotribune.com)- Today the Venezuelan people celebrated a new electoral fiesta as millions took the streets to ratify the democratic spirit of the majority of Venezuelans.

The journey went smoothly, without major incidents, all over Venezuela. The common denominator was the speed of the new voting machines, the excellent biosafety protocols set up by the National Electoral Council (CNE) and the lack of big lines in the voting centers.

Venezuelans, facing on a daily basis the hardships of the economic crisis caused by the criminal US blockade and sanctions, went to the voting centers to express their democratic spirit in a contest that — if there was a rational political opposition—might have put President Nicolás Maduro and his party (PSUV) in trouble.

Important speeches on the journey

At noon José Luis Rodríguez Zapatero, former president of Spain and international observer of the parliamentary elections in Venezuela, spoke on the development of the elections. “I express my satisfaction that after two very difficult years for Venezuela we can be at this moment, which must be the prelude to a future in which economic recovery, coexistence and institutionality are the path,” he told the press.

The Iberian politician sent a message to the opposition groups that decided not to participate in the elections. “I want to tell them that the future must be of participation… That they recapacitate, that they demand, and that in the new electoral calls that will come in the coming years, that path be recovered.”

RELATED CONTENT: Upcoming Venezuelan Election is Another Rejection of US Imperialism

For his part Diosdado Cabello, first PSUV vice-president, stressed his satisfaction of the work that PSUV has done for the unfolding of the electoral process. The candidate also assured that at the end of the contest the fruits of those who have decided to remain independent, sovereign and free, will be seen. He highlighted the “demonstration of civility”, and the capacity of the Bolivarian National Armed Forces (FANB) and the CNE to provide quick response to the problems that could arise in the polling stations.

President Nicolás Maduro exercised his right to vote at the Simón Rodríguez Ecological School, from where he affirmed that with their vote the Venezuelan people will mete out justice to a National Assembly (AN) that for five years had turned its back on the country and the people.

“Through your vote,” President Maduro said, “a new era is born in Venezuela and we are able to give ourselves the opportunity to begin a truly democratic process to start the recovery of the country. This is election number 25, and when it dawned I said that the day has come, it is time. We have had the wisdom and patience to wait for this day and get us out of this National Assembly that brought upon the country the plague of sanctions and suffering. Today with the vote we are doing justice,” the president added.

Orinoco Tribune on the ground

The Orinoco Tribune team, as patriotic Venezuelans, went to vote, but also with boots on the ground visited several voting centers in Caracas during the afternoon to observe the turnout at that time and also to verify the peacefulness of the whole electoral process.

Around 4:00 pm our team visited a number of voting centers in the El Paraiso, San Martin and Santa Eduvigis neighborhoods. The number of voters at that time was low in comparison to the voter turnout we witnessed in the morning and at noon. None of the centers we visited presented irregular security incidents at the moment.

The only unusual situation that raised the attention of our team was a group of motor-bikers, riding in groups of four or six bikes with two bikers on each one, all dressed in black and the rider on the back of each bike carrying a big backpack. They did not look like personnel of law enforcement or intelligence agencies and rode at high speed. It might have been a group of workers or escorts of opposition parties or even of the CNE, but the fact remains that they are not usually seen in the streets of Caracas.

We saw several times in different barrios a group of motorbikers that did not seemed to belong to a law enforcement agency. They moved fast in groups of 5 or 6 bikes with 2 bikers on each, the one in the back with a big backpack. This was very unusual! #Parlamentarias2020 pic.twitter.com/QWnYkSpqmg

The biosafety protocol implemented by the CNE to prevent the spread of COVID-19 exceeded our expectations. Voters were provided with liquid sanitizer sprays (on hands and shoes) on entering the voting center and also on reaching the voting table to cast their votes and on leaving the table thereafter. There were measures to avoid touching the identification cards (only requirement to vote), guides to maintain proper physical distancing while waiting in line, etc.

Our team was impressed by the new voting machines. It took less that a minute to vote and less than four minutes to enter and exit the voting table. Many analysts agree that this was a reason for the short lines that were seen at several places, especially in the afternoon.