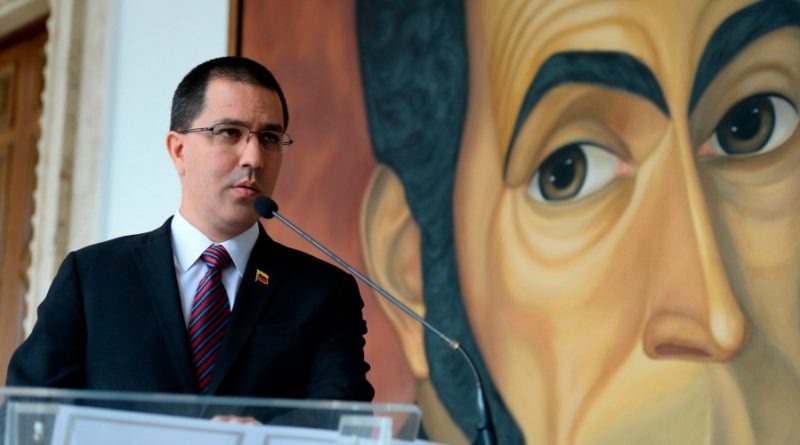 With punishing sanctions, the Trump administration has given “a death sentence to tens of thousands of Venezuelans per year,” foreign minister Jorge Arreaza said.

Venezuela’s top diplomat called on the International Criminal Court Thursday to open an investigation into sanctions imposed on his country by the Trump administration, saying the economic warfare has caused the suffering of millions of Venezuelans.

“Our government is seeking refuge with international law,” Foreign Minister Jorge Arreaza said Thursday. “We are convinced the consequences of the unilateral measures [by the United States] constitute crimes against humanity against the civilian population.”

Arreaza’s remarks came less than a week after the U.S. announced its latest round of sanctions on the country, this time targeting state-run airline CONVIASA.

“What justifies sanctions on a transport company, a public service?” President Nicolas Maduro said after the sanctions were announced. “What harm do they do to me? The damage is done to the people of Venezuela.”

The U.S. has targeted Venezuelan officials and state-run businesses with several rounds of sanctions since Maduro won re-election in 2018 in an election the Trump administration claimed was illegitimate.

In January 2019 the U.S. sanctioned state-owned oil company PDVSA in an attempt to pressure Maduro to resign as the Trump administration became the first of a few dozen countries to claim opposition leader Juan Guaido was the legitimate president of Venezuela.

The administration also froze the U.S. assets of Maduro and other top officials in his government.

Cutting the government off from revenues from its oil reserves—the largest in the world—has amounted to “a death sentence for tens of thousands of Venezuelans per year,” Arreaza stated in a 60-page brief he presented to the ICC. This week, Venezuela gave up rights to its own oil in order to keep the economy afloat.

Venezuelan officials said that since the country is part of the court, crimes against humanity within its border fall under its jurisdiction and qualify as war crimes.

“I am deeply worried about the potentially severe impact on the human rights of the people of Venezuela of the new set of unilateral sanctions imposed by the U.S.,” Michelle Bachelet said in August. “The sanctions are extremely broad and fail to contain sufficient measures to mitigate their impact on the most vulnerable sectors of the population.”

The Center for Economic and Policy Research reported last year that 300,000 people were estimated to be at risk due to lack of access to medical treatment resulting from the sanctions, including, 80,000 HIV-positive people, 16,000 cancer patients, and 16,000 people in need of dialysis.

The U.S. has violated “international law and human rights,” said Arreaza, calling on the ICC to investigate which U.S. officials should be prosecuted for imposing the sanctions.