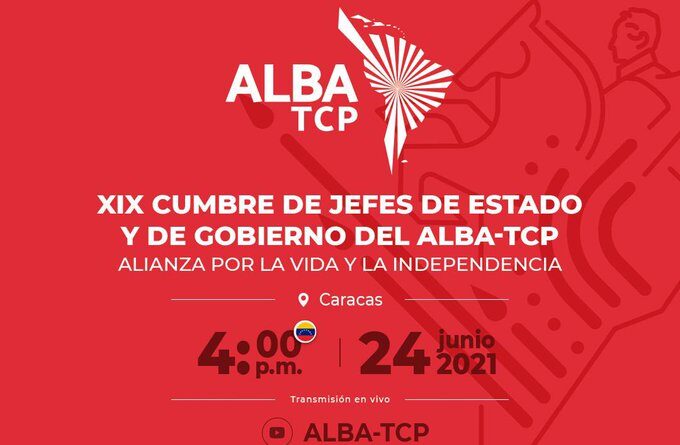 On June 24, the Bolivarian Alliance for the Peoples of Our America-Peoples’ Trade Agreement (ALBA-TCP) will hold its 19th summit of heads of state and government, confirmed the executive secretary Sacha Llorenti yesterday.

“On June 24, in commemoration of the events of Carabobo, the 19th Summit of Heads of State and Government of @ALBATCP will be held,” wrote Llorenti on his Twitter account. “Ours is an alliance for life and for independence.”

RELATED CONTENT: Cuba Thanks ALBA-TCP for its Support Against US Blockade

Expectations
In a recent interview with journalist Denis Rogatyuk for the Voces sin Fronteras podcast, the Bolivian diplomat Llorenti indicated that the bloc will continue to strengthen regional integration between member countries faced with global challenges and threats to their peoples.

“We are working to further strengthen our alliance and make a qualitative leap towards unity,” said the executive secretary, “in a landscape in which the United States, allied with regional oligarchies, is generating a boycott of integration efforts.”

During the 18th ALBA-TCP Summit, held virtually on December 14, 2020, ALBA-TCP ratified its commitment to strengthening the regional body.

Featured image: Banner with the next ALBA-TCP summit information. Photo courtesy of @SachaLlorenti.