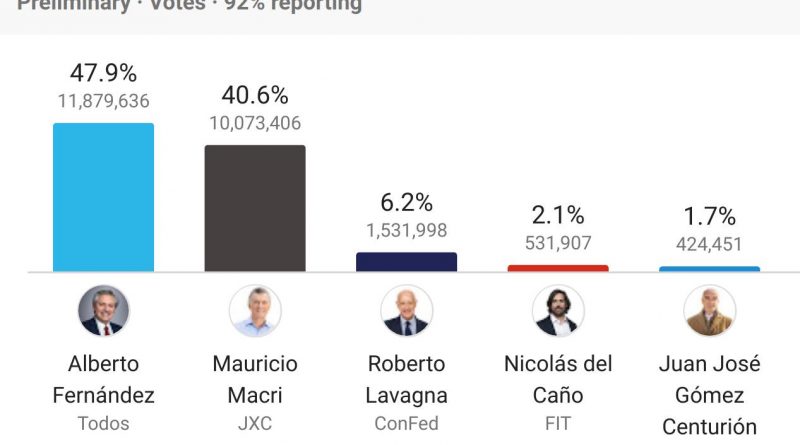 Latin America and ALBA-TCP News
October 27, 2019October 27, 2019 orinocotribune Alberto Fernández, Cristina Fernandez-Kirchner, Macri good by, no need for second round, peronismo, the left is comming back

Peronist candidate Alberto Fernandez, representing the Front of All alliance, leads in the presidential elections in Argentina, gaining 47.9 percent of the vote with 92 percent of ballots counted, the election commission reported on Sunday. The country’s incumbent president, Mauricio Macri, is getting 40.6 percent and is expecting to keep moving down as remote area votes tend to favor Peronismo. In a public address Macri conceded the victory to Fernandez and invited him for breakfast in the “Casa Rosada”.

With these results a second round will not be necessary. According to Argentine law, a victory in the first round is secured for the candidate who gains either more than 45 percent of the vote, or more than 40 percent with a 10 percentage points lead over the closest opponent.

This victory also caps a remarkable political comeback for his running mate, ex-president Cristina Fernandez de Kirchner, who will be his vice-president.

“It’s a great day for Argentina,” a smiling Fernandez told reporters after exit polls and his own party’s tallies, had announced his victory.