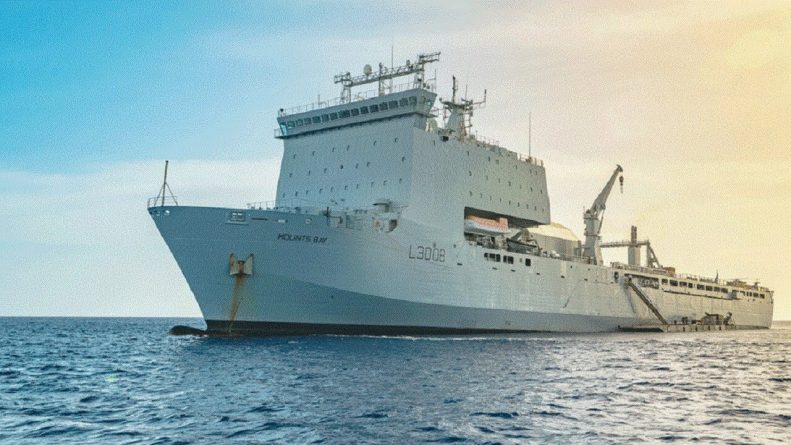 A British military vessel is operating near the coasts of Venezuela, as reported by Noticias Curaçao.

The RFA Mounts Bay, said the media, launched a helicopter of the United States Coast Guard for the first time last December. “From Miami, the ship traveled to Curaçao and moored in Caracasbaai on January 21. The Royal Navy indicated that this vessel is carrying out an anti-narcotics “take-down” mission, jointly with the US Southern Command”, the report said. For its part, the Ministry of Defense of the United Kingdom said that the military deployment corresponds only to alleged routine activities. Here you can see in detail the ship’s capabilities:

Recall that the United Kingdom joined the countries that have recognized the opposition leader Juan Guaidó as “interim president” of Venezuela. It is also important to remember that traditionally the UK is the first “partner” of the US when initiating military aggressions in other countries. Wikipedia indicates that “RFA Mounts Bay is a Bay-class auxiliary landing ship dock (LSD(A)) of the Royal Fleet Auxiliary. She is named after Mount’s Bay in Cornwall”. The detailed ship’s description is here:

As a sealift ship, Mounts Bay is capable of carrying up to 24 Challenger 2 tanks or 150 light trucks in 1,150 linear metres of space.[1] The cargo capacity is equivalent of 200 tons of ammunition, or 24 Twenty-foot equivalent unit containers.[1] During normal conditions, a Bay-class ship can carry 356 soldiers, but this can be almost doubled to 700 in overload conditions.[1] No helicopters are carried on board, but the flight deck is capable of handling helicopters up to the size of Chinooks, as well as Merlin helicopters and Osprey tiltrotor aircraft.[1][3] The well dock can carry one LCU Mark 10 or two LCVPs, and two Mexeflotes can be suspended from the ship’s flanks.[1][3] Two 30-ton cranes are fitted between the superstructure and the flight deck.[1]