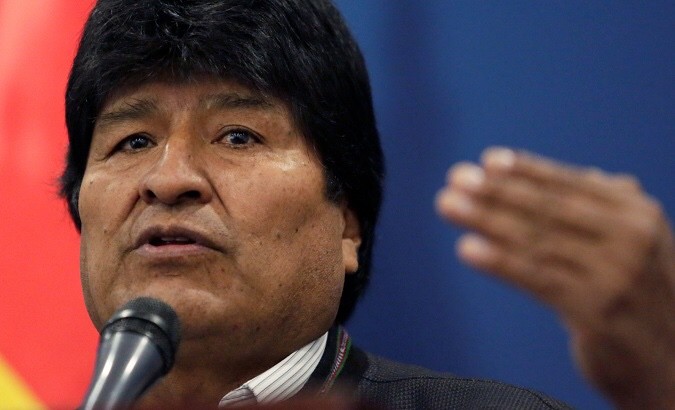 “We call on the Latin American brothers and the world to continue looking for a peaceful solution,” Morales said.

In a continued call for peaceful dialogue, Bolivia says it will not be responsible for a war in Venezuela, President Evo Morales via a Twitter post-Monday.

“We call on the presiding brothers of Latin America and the world to continue looking for a peaceful solution to the situation in Venezuela. We can not be responsible for a war between brothers which would also violate the norms of international law,” Morales wrote.

The Bolivian president continued on to denounce U.S. attempts to send aid to Venezuelans via the Caribbean and Colombia without state approval under the guise of a philanthropic gesture. Last week, both the International Red Cross and the Red Crescent refused to participate in the operation and override Venezuelan mandate.

Morales wrote, “The head of the delegation of the International Committee of the Red Cross in #Colombia, Christoph Harnisch, will not participate in the distribution of ‘help’ from #US to #Venezuela because it is not ‘humanitarian.’ We’ve said it before: Humanitarian Aid is an institution that must be protected.”

The Indigenous president has repeatedly voiced his concerns over the U.S. interventionist behavior towards Venezuela’s political situation.

“In Venezuela there is no problem of democracy or dictatorship, the problem is not Nicolás Maduro, the problem is Venezuelan oil. The United States with any pretext wants to take over the natural resources, “Morales said Saturday, adding that behind any “humanitarian act,” is “North American intervention.

The United States and its right-wing allies in Latin America have come out in support of a right-wing coup attempt against the Venezuelan government of socialist President Maduro after they supported a decision by opposition lawmaker, named Juan Guaido, to declare himself an “interim president” of Venezuela on Jan. 23 in violation of the country’s constitution.

In return, Maduro has repeatedly called for the restoration of talks between his government and the opposition in order to maintain peace and avoid a U.S.-backed coup, or even military intervention by the United States in favor of removing him and placing an unelected right-wing government.