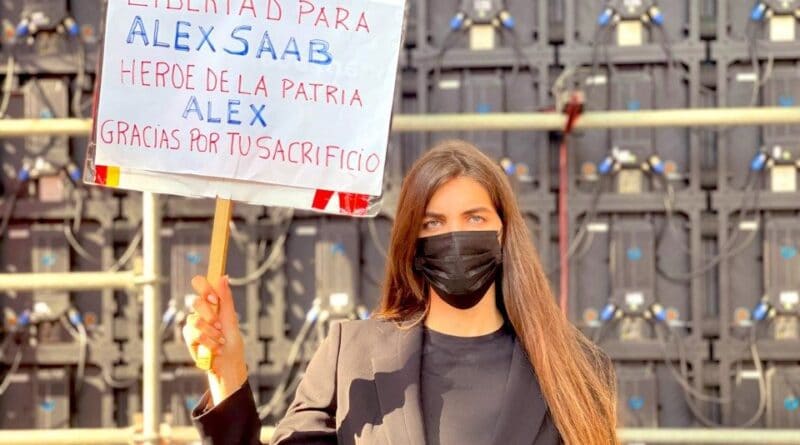 Editorial note: This letter was read—with tears in her eyes—by Camila Fabri, Alex Saab’s wife, during a demonstration in repudiation of the second kidnapping of the Venezuelan diplomat from Cape Verde by the US, held in Caracas’ Plaza Bolívar on Sunday, October 17, attended by a crowd of indignant Venezuelans.

My name is Alex Nain Saab Moran, with Venezuelan diplomatic passport number 045778720. I am a special envoy with diplomatic immunity [officially granted by] the Russian Federation and the Islamic Republic of Iran since April 2018 and Venezuelan alternate ambassador to the African Union [since December 2020].

I was hijacked by Cape Verde on June 12, 2020, when my flight stopped to refuel on a special humanitarian mission to continue to the Islamic Republic of Iran by order of my President Nicolás Maduro Moros.

I was kidnapped without an arrest warrant as required by law in Cape Verde and without an Interpol warrant, in a country that has no extradition treaty with the US, and they disregarded my diplomatic immunity which was even claimed by Venezuela immediately.

I was tortured physically and psychologically by the US and Cape Verde, with the consent of the government of Donald Trump, and members of the government of Cape Verde such as Minister Landim, Prime Minister Ulysess Correia da Silva, Carlos Reiss head of national security, Paulo Rocha Minister of Government and the director of the Sal prison Mr. Correia, for 8 months with the economic support of the United States, Juan Guaidó and the former head of security of Narnia Ivan Simonivis, until the international pressure, of Your Government and the decision of ECOWAS to move me to house arrest could not be delayed anymore.

The house arrest was a farce since I always remained locked up as in prison and watched 24 hours a day by an average of 50 military men who were the ones who handled the keys to the house in which I had no privacy or access to telephone or letters. I had to do everything through only one lawyer, Dr. Pinto Monteiro, who was the only one authorized to visit me, the whole team of international lawyers was deported several times as soon as they landed in Cape Verde.

In Cape Verde, a country that is a lackey of the empire, corrupt and cowardly, all my human rights were violated. They violated their own laws, deadlines, and terms, at the whim and orders of the United States. Now the constitutional court has decided to violate 12 constitutional points that were impossible to violate and have authorized my extradition.

I hold the US government and the extremist opposition government of Narnia fully responsible for my integrity, for my life, in the prison to which they are taking me.

I will face the trial with total dignity and asserting my diplomatic immunity as a servant of the Bolivarian Republic of Venezuela since April 2018.

I wish to make it clear that I have nothing with which to collaborate with the United States, that I have not committed any crime in the US or in any other country, that I will not lie to benefit the US against President Nicolás Maduro or his government; a government totally dedicated to the welfare of its people and which is going through an inhumane blockade by the United States that wants to take over the wealth of the country. Let us surround our president and our government with a human shield and let us not allow ourselves to be defeated. They will never come back!

I declare that I am of sound mind, that I am not suicidal, just in case they assassinate me and say I committed suicide, which I would never do.

I love my wife Camila and my children Shadi, Isham, Jad, Mariam Rose, and Charlotte more than my own life.

I ask you to be strong and always stay united.

United We Shall Overcome! Always have faith in God.

Featured image: Camila Fabri, Alex Saab’s wife, at a demonstration in Caracas in repudiation of the second kidnapping of her husband. File photo.