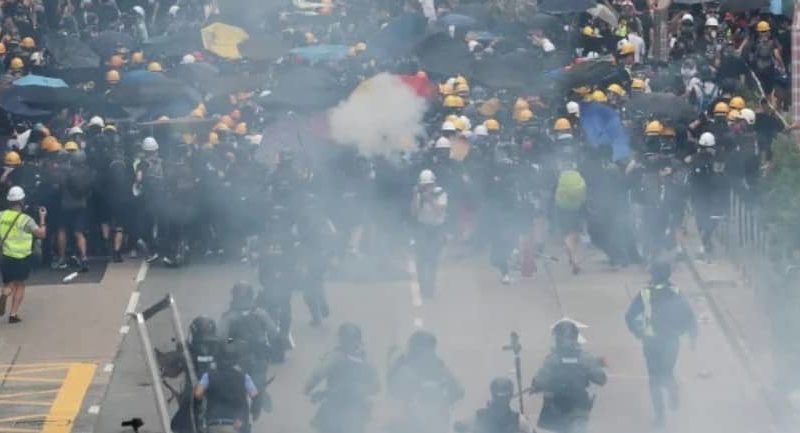 The Hong Kong rioters and other violent so-called opposition figures, are up for a big surprise soon: their actions may simply not be tolerated, anymore. In fact, they might become illegal.

But not because, as the White House and the Western mass media are continuously trumpeting, “China is governed by the Communist Party”, but simply because such activities are illegal in China as well as in most parts of the world, including the United States and Europe.

In some countries, which are seen as close allies of the West, like Indonesia and India, even speaking about independence can lead people to imprisonment, torture, rape, disappearance, and death. In Indian-administered Kashmir and Indonesian “administered” West Papua, hundreds of thousands have already vanished.

In such places, just waving a flag of independence, can abruptly end human life. But in the Western lexicon, both Indonesia and India are defined as “democracies”, and their political systems are hardly ever attacked or criticized. No sanctions are imposed due to “human rights violations”.

Why? Simply because such countries are taking the diktat, meaning “behaving as close allies of the West”, sacrificing their own citizens on the altar of North American and European political and corporate interests.

Being submissive to Washington, London, Paris and Brussels, obedient countries hardly ever gets ‘punished’, attacked or antagonized.

China is not ‘obedient’. It does not kneel. China is defending her own people, as well as those billions of oppressed men, women and children, that are still abused by Western neo-colonialism, in all corners of the world.

Hong Kong is an integral part of China. It is, and this fact truly matters, particularly now, when China is being provoked on all fronts, politically, militarily, economically and ideologically. Its adversaries are looking for a ‘soft spot’, the Achilles heel, and they think that they have managed to identify it. They believe that it is Hong Kong, a former British colony and a territory known to be obsessed with business and trade.

They think that Hong Kong is ready to betray China for some dubious special status or privileges, which it may or may not receive if it surrenders itself to the Western regime.

They are wrong. The rioters do not represent the majority of the people of Hong Kong. The rioters are noisy, annoying, and destructive. They serve foreign masters. Precisely as in the past, when a certain percentage of the inhabitants of Hong Kong used to serve the British colonizers.

But the majority of local people clearly identify themselves with China. Their flag is that of China, and so is the national anthem. And their hearts, too.

Now, soon, many treasonous actions of the rioters, who on behalf of foreign powers have been demanding ‘independence’ while desecrating the symbols of the People’s Republic of China, will be made illegal; will most likely be made comparable with terrorism.

On May 22nd, 2020, the South China Morning Post reported on the new national security law for Hong Kong:

“Chinese legislators are expected to discuss a new law concerning Hong Kong’s national security at the upcoming parliamentary session. The law would ban all seditious activities aimed at toppling the central government and external interference in the city’s affairs, as well as target terrorist acts in the special administrative region, sources say.

Under Article 23 of the Basic Law, or the city’s mini-constitution, the Hong Kong government must enact its own national security law prohibiting acts of “treason, secession, sedition, subversion against the central people’s government, or theft of state secrets … and to prohibit political organisations or bodies of the region from establishing ties with foreign political organisations or bodies”.

For those that are not familiar, do search for the 18 U.S. Code CHAPTER 115—TREASON, SEDITION, AND SUBVERSIVE ACTIVITIES. Then compare it with the new proposed law in Hong Kong. See which one is tougher. Think about people like Assange or Snowden.

After such a comparison, does China still appear ‘undemocratic’? Are its actions really over the top?

Or, study the laws and practices of France towards Corsica and other parts of the country, which would like to opt for independence.

Everyone knows how the independence-minded Catalans fared in Spain. Catalan officials were hunted down, protesters were imprisoned, humiliated. Many had to flee their homes. People were brutalized. And these were spontaneous, mostly peaceful protesters.

There are so many examples, all over the world, of tough, draconical laws and practices, preventing nations with different cultures and languages, from seeking independence. But it is China that is singled-out and threatened with ‘punishment’ (what language, “to punish” the most populous country, with one of the oldest cultures on Earth!), over Hong Kong which has the same culture, same history and language, as the rest of the country.

In the past, China was broken into pieces by Western invasions, plundered, and parts of it, colonized. This is how places like Hong Kong became ‘different’, and “special zones”. Now those who attacked, looted and occupied parts of China, are talking about ‘human rights’, liberties, freedom and justice. They think they have the right to lecture China. They believe they should be allowed to judge China, while interfering in its domestic affairs.

No. This subversion should not be allowed, and it will not be.

China has the right to defend, to protect itself; all over its vast territory. Including Hong Kong. And it is going to do precisely that.

Nobody has any doubts, anymore, that the West is not interested in “rights”. It violates the rights of defenseless people and nations, all over the world.

Both friends and foes of China can clearly see that the barrage of insults against Beijing, coming from the governments and mass media outlets based in North America and Europe, are nothing else other than a constellation of hostile acts, meant to break China, once again.

Friends of China are horrified, while its enemies are salivating, clapping their hands, excitedly and shamelessly.

The Hong Kong rioters are committing treason. As their counterparts do, in other countries and territories, often for a fee. Hopefully, they will be stopped, soon, very soon. Hopefully, peace, reason and prosperity will return to Hong Kong.

Hopefully, China withstands this dangerous moment in its history. This is a moment when it shows, clearly, who Beijing’s true friends are and who its foes are.

Those who want stability, prosperity and safety for China, will be strongly supporting the new security law for Hong Kong. Others should be stopped, with determination, and speed!